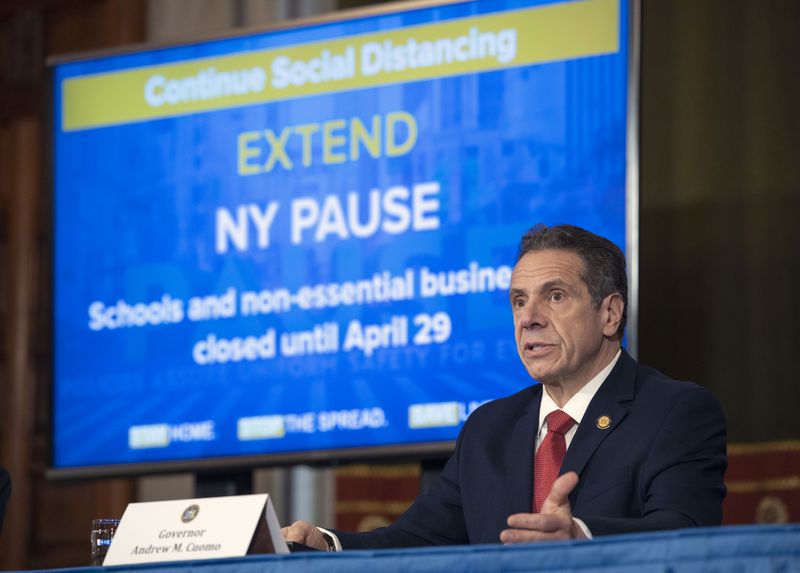 
Gov. Cuomo said 777 New Yorkers died of coronavirus Friday even as the number of those in intensive care units dipped for the first time since the pandemic hit the state weeks ago.
“We continue to lose a great number of lives,” Cuomo said. “The leveling off of the number of lives lost is a somewhat hopeful sign."
The state death toll rose to 7,844, about half the national total, as the nation entered Easter weekend, the holiest time on the Christian calendar.
The daily toll retreated a bit from its record high of 799 from a day before. It’s been fairly steady at a horrifying level for several days now.
Despite the still-fearsome death toll, the number of New Yorkers hospitalized for coronavirus barely budged. And the number in intensive care units, a figure that drives the death toll higher in future days, dropped for the first time.
“We are cautiously optimistic,” Cuomo said. “We are flattening the curve.”
Cuomo proposed setting up a 9/11-style “heroes fund” to help health care workers and first responders who have been on the front lines.
The governor displayed graphics depicting the death and infection tolls, compared to much-worse predictions made by public health experts and consultants.
“The actual curve is much lower than any of them projected,” Cuomo said.

Cuomo called on President Trump to invoke the Defense Production Act to boost testing for coronavirus antibodies, which would identify people who have been infected and might be cleared to interact with the public or return to work.

The governor denounced the Congress for what he branded “pork barrel” spending in the $2 trillion stimulus bill.

He suggested that the Republican Senate improperly played politics with the aid instead of directing it to states with the greatest need.

The governor questioned why the U.S. was so ill-prepared for the pandemic, especially when there should have been ample warning from the outbreak in China and South Korea.

“How did that happen,” he asked. “Did we really need to be in this situation?”
Posted by free heip at 09:21