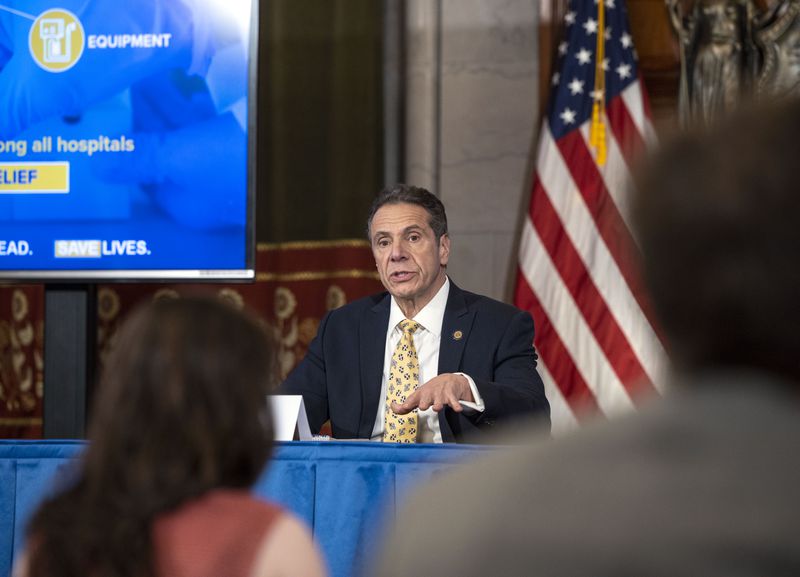 
Gov. Cuomo said a “breathtaking” record 799 people died in New York state from coronavirus in one day Thursday and warned against underestimating the killer pandemic.
The new spike in deaths has pushed the total statewide toll over 7,000, about half the national total.
“I understand the data, but you’re dealing with 799 lives,” Cuomo said. “It’s so shocking, breathtaking. I don’t even have words for it.”
The governor said the pandemic has now far eclipsed the horror of 9/11 -- and admitted that he never thought any New Yorker would experience such mass death in a generation.
“There’s no explosion but it ... just ripples through society with the same randomness,” he said.
The terrible toll could be even worse. New York City said Thursday that 824 people died in the five boroughs alone. The city and state are using different methodologies for counting victims, leading to discrepancies.
An even bigger issue is the fact that thousands of New Yorkers who have died at home of apparent coronavirus are not being included in any official tallies, studies say.
Even as he shook his head in disbelief at the soaring death toll, Cuomo showed data that suggests the worst of the crisis has eased for now as the growth in new hospitalizations and intensive care has dipped significantly.
He credited New Yorkers with leaning into social-distancing recommendations like avoiding in-person annual religious observances like Easter, Passover and Ramadan.
“Every day is tough on many levels,” Cuomo said. “But every day we stay tough we are saving lives.”
Even though New Yorkers are tiring of staying inside and staying home from work, Cuomo said the state will squander any gains by easing up now.
“If we stop acting how we’re acting, the numbers are going to go back up,” he said. “We don’t have an option.”
The governor spoke cautiously about turning the traffic light on the state’s economy from “red to yellow.” He hopes to be able to allow some workers to return to work with the help of widely expanded testing that could identify those who are not infected with the virus.
He warned that pandemics often send several waves of death and illness ripping through affected communities.
A second wave could hit New York if it relaxes social distancing measures or even if a new strain of the virus develops in weeks or months.
“We’ve underestimated the enemy and that is always dangerous,” Cuomo said. “We should not do that again.”

Cuomo called the economic devastation wrought by the pandemic "far worse than 9/11. He admitted the state’s unemployment system crashed amid a “100-fold increase” in claims.

The governor said 1,000 state workers are now processing claims from workers laid off or furloughed by the pandemic.

“That used to be the number of applicants,” he said, noting that all benefits will be applied retroactively.

With the state facing a looming $10 billion shortfall, Cuomo said he was scrapping a planned 2% raise for some 80,000 state workers that was slated to go into effect this month.

Unions representing state workers, including prison guards and some health care workers, slammed the move as counterproductive.
Posted by free heip at 05:43