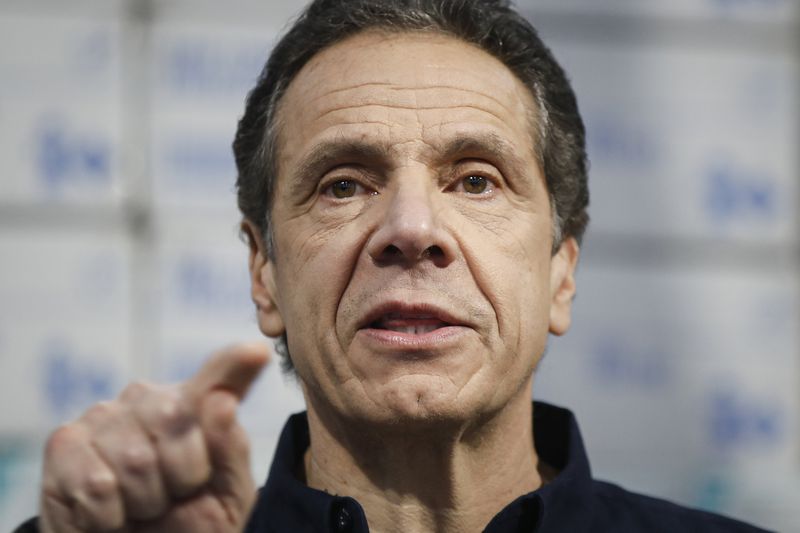 Gov. Cuomo warned President Trump Tuesday that he would defy an order to reopen New York’s economy too early after the coronavirus crisis.
“We don’t have a King Trump, we have a President Trump,” Cuomo told CNN. “If he ordered me to reopen in a way that would endanger the public health of the people of my state, I wouldn’t do it.”
Trump on Monday insisted at a rambling press conference that he has “absolute power” to order states to reopen their economy.
The governor lashed out at Trump for what he said would be an unconstitutional effort to overrule governors, who are working on a nascent plan to relax social distancing rules only when it is safe.
“We would have a constitutional challenge,” Cuomo said. “The worst possible thing he could do at this moment would be to act dictatorial and to act in a partisan, divisive way.”
Cuomo was non-committal about Connecticut Gov. Ned Lamont’s suggestion that May 20 might be a target date to start reopening the economy in the New York metro area.
“Nobody can tell you this -- this is that is going to happen in June, this is what is going to happen in July,” he said. "We have never been here before.
Cuomo suggested a phased reopening would rely on far more widespread testing, which he conceded neither the state nor the federal government now has the ability to perform.
“It’s a conundrum,” Cuomo said.
Without discussing a particular date, Cuomo laid out a framework for a potential reopening that would expand the number of businesses that would be allowed to operate.
Blasting Trump for flip-flopping, he called on the president to go back to working cooperatively with the governors, who have generally praised the administration for cooperating.
Cuomo noted that Trump refused to push governors to issue stay-at-home orders when he perceived they might be politically risky. But now he hopes to order them to lift the same orders.

“This is a 180 .... It makes no sense. It is schizophrenic,” Cuomo said. “This is stepping forward and trying to step over the states, which is frankly I think more partisan, more divisive and more dangerous.”

Trump initially downplayed the threat of the coronavirus pandemic for months even as experts warned it could strike the U.S. with devastating impact.

Even after giving his blessing to widespread social-distancing measures, he was poised to order his followers back to normal by Easter. After public health experts warned him of a death toll that could reach over 200,000, Trump relented and extended the measures through the end of April.

But now that he is seeing the punishing economic cost of the pandemic, Trump is again pushing to reopen the economy at all costs.

In the face of Trump’s mercurial response, states on both hard-hit coasts have banded together to come up with their own road maps to reopen as the pandemic eases.

Trump lashed back Monday at that effort along with an exhaustive New York Times report detailing his failure to respond adequately to the pandemic threat in January and February.
Posted by free heip at 06:17