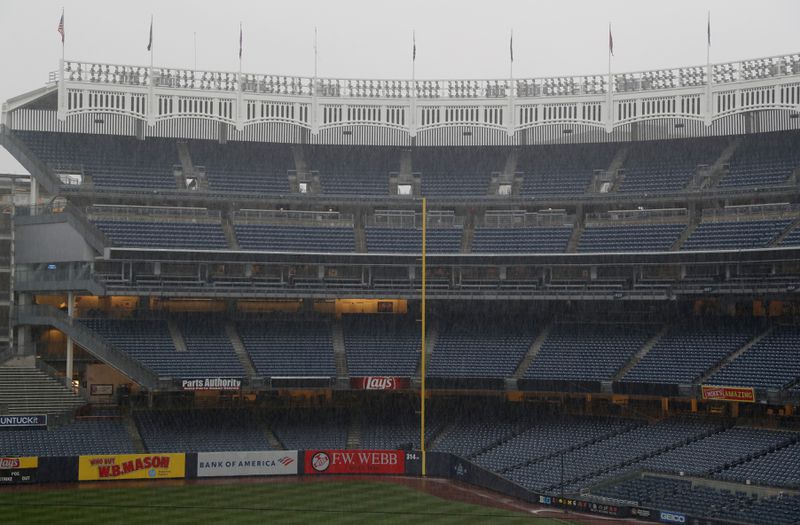 An empty Yankee Stadium in May 2019.(Kathy Willens/AP)


Two New York ticket holders are taking a swing at Major League Baseball with a new lawsuit.
Matthew Ajzenman and Susan Terry-Bazer filed the suit Monday against MLB — as well as its 30 teams and Commissioner Rob Manfred — over tickets they purchased for games that are now in limbo due to the start of the season being postponed as a result of the coronavirus pandemic.
Official resale ticket partners of the league are also named as defendants.
Ajzenman is a partial season ticket holder for the Mets, while Terry Bazer spent nearly $1,000 on tickets to see the Yankees play the Boston Red Sox in the Bronx on May 9.
“Baseball fans are stuck with expensive and unusable tickets for unplayable games in the midst of this economic crisis,” contends their lawsuit, which was filed in Los Angeles. “Under the pretext of ‘postponing’ games, at the directive of MLB, teams and ticket merchants are refusing to issue refunds for games which are not going to be played as scheduled — if ever.”
Opening Day of the MLB season had been scheduled to take place March 26 but was postponed until at least mid-May due to the outbreak of COVID-19. MLB officials and the players union have reportedly explored options such as playing games without fans or at neutral sites as they await word from the government about when the season could potentially start.

Ajzenman said he paid $317 last year to cover the first installment of his ticket plan with the Mets, which cost $1,730 in total. His plan includes more than 20 games.

Terry-Bazer, meanwhile, said she bought six tickets to that May 9 game at Yankee Stadium through TicketMaster, spending $926, so she could take her grandson.

MLB has not commented on the lawsuit.