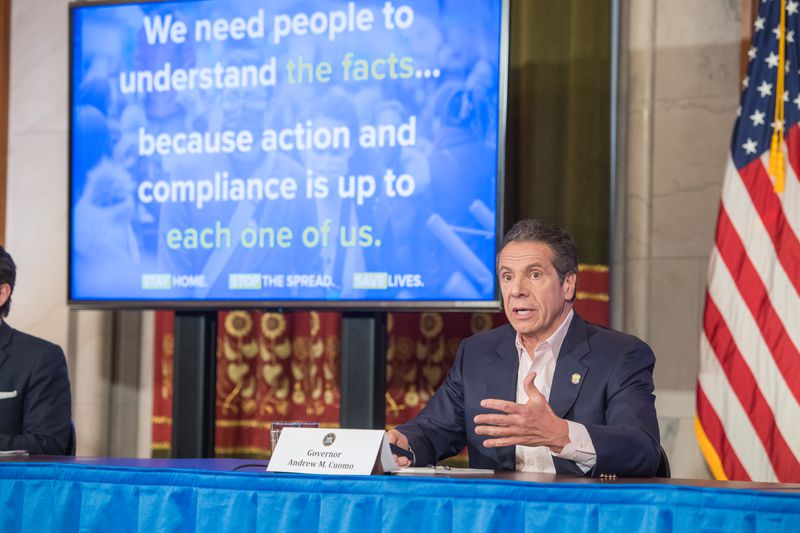 
Parts of upstate New York could begin “Phase 1” of reopening around the middle of May provided COVID-19 hospitalizations have declined for two straight weeks by then, Gov. Cuomo said Sunday — though he noted that the Big Apple will require extra caution.
“I don’t want to just reopen. We learned a lot of lessons here, painfully,” the governor told reporters in Albany. “We’re going to be better for it and we’re going to reimagine what our life is and we’re going to improve for this pause.”
He said upstate regions like Central New York and North County are poised to be the first candidates to begin the reopening process, which would start with construction and manufacturing and transition to “lower-risk” businesses down the road.

Cuomo’s latest “pause” order requiring most workers to stay at home, among other measures, is in effect until May 15. He indicated that if regions have had 14 straight days of decreased COVID-19 hospitalizations by then, they could begin to reopen, in keeping with guidance from the U.S. Centers for Disease Control and Prevention.

“What regions of the state have seen a decline for 14 days? That’s where you will start the conversation to get to Phase 1 in that region,” he said.

As for New York City, Cuomo said, “Downstate New York is going to be more complicated.

The briefing came after the state’s toll of confirmed COVID-19 deaths rose by 367, to a total of 16,966, on Saturday. There were 1,087 new hospitalizations Saturday, bringing the total to 12,839 — the 10th day in a row with a decrease in new hospitalizations.

In New York City, there were 403 new deaths Saturday, making the total 16,673, according to the city Health Department that, unlike the state, is tracking both confirmed COVID-19 fatalities and “probable” ones.

Statewide, there were 288,045 positive coronavirus cases, 153,204 of them in New York City, according to authorities.

With New Yorkers dreading a summer with playgrounds locked down, large venues closed and almost every usual kind of recreation canceled, Cuomo said leaders have to give people alternatives.

“We need summer activities in downstate New York,” he said. “You can’t tell people in a dense urban environment all through the summer months, ‘We don’t have anything for you to do, stay in your apartment with the three kids.’

“There's a sanity equation here also that we have to take into consideration.”

He said he’s begun speaking with sports franchise owners to talk about which teams might be able to play games without having a live audience, though he declined to go into detail.

Cuomo also called for “special attention” for public housing residents and low-income communities, which comprise some of the hardest-hit communities in the state.

“Lower-income communities need more assistance through this,” he said.

Nationwide, there were more than 950,000 confirmed coronavirus cases and more than 54,000 deaths as of Sunday afternoon, according to Johns Hopkins University.
Posted by free heip at 09:17