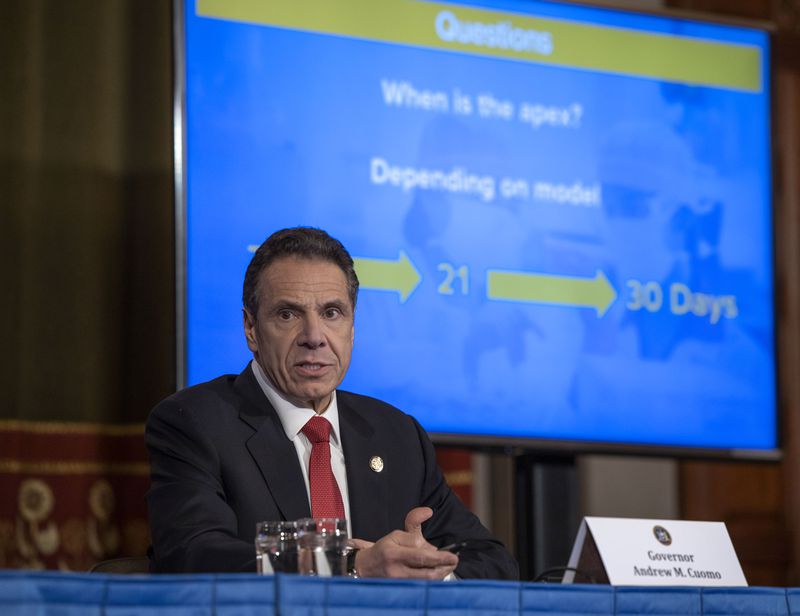 
Gov. Cuomo vowed to take emergency action to get more ventilators for those in desperate need as the coronavirus pandemic killed a daily record high of 562 New Yorkers and positive cases soared over 100,000 in NYS.
The governor Friday signed an executive order giving him the power to take ventilators from private health institutions to redistribute to those in the worst need via the National Guard.
“I’m not going to be in a position where people are dying and we have ventilators in our state,” Cuomo said. “I can’t let people die.”
Cuomo explained that the owners of the procured ventilators will either have their medical gear returned or be compensated by the state.
“Am I willing to (do this) to save a couple of hundred lives?” he asked. “You’re damn right I am.”
The total NYS death toll rose to 2,935 Friday, continuing on a pace of about half the nationwide number of coronavirus deaths. The number of positive cases rose to 102,863 as the state recorded a daily record 10,482 new cases.

New York City is still bearing the brunt of the pandemic with more than 5,000 cases reported in the last 24 hours alone. Long Island is battling a growing spread of the virus with 1,400 new cases each in Nassau and Suffolk counties.

Pleading with the nation to “help New York,” Cuomo called again for a much more robust national approach to the pandemic, which is causing life-threatening shortages of ventilators and other medical equipment

“The only practical solution is to focus on the emergency where it exists ... and then redeploy,” he said. “What is the alternative?”

He insisted he was not seeking to play a blame game with the White House or fellow governors over the pandemic.

Cuomo angrily held up a flimsy hospital gown to illustrate what he called the insanity of New York and other states seeking to buy personal protective equipment.

“It can’t be that companies in this country or this state cannot make these simple products,” he said.

The governor passionately thanked volunteers for heeding calls to help the Empire State and Big Apple in their moment of need. He vowed to repay the debt in spades.

“That’s how we beat this damn virus as it marches across the country,” Cuomo said. “When our curve is over, New Yorkers will go to any community that needs help.”

Amid the pandemic, New York State has added the Latin phrase E Pluribus Unum, which means out of many, one.

Answering a question about his late father Gov. Mario Cuomo, the governor said he learned how to have the strength to lead and invaluable lessons about unifying people in times of need.

“He taught me to trust love,” Andrew Cuomo said. “We need love as a people. It’s about doing the right thing and people will respond to that.”
Posted by free heip at 03:06