'It’s been a complete nightmare’: Mother’s body may be kicked out of NY funeral home morgue if siblings can’t decide what to do with it 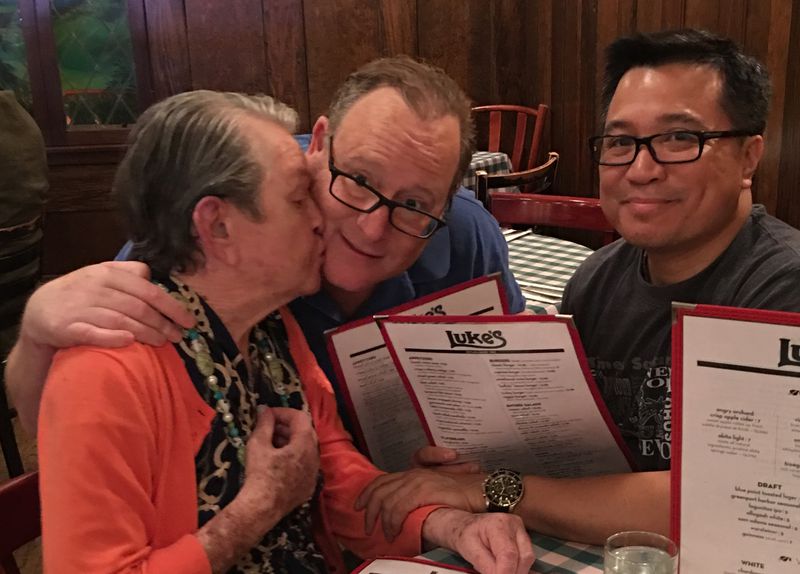 Dean Hart, with his mother Beatrice in 2016.(Courtesy photo)


Coronavirus didn’t take Beatrice Hart’s life — but it may force her out of a Long Island funeral home if her two feuding children don’t decide soon what to do with her body.
Siblings Dean and Penny Hart — who have been fighting over their mother’s multimillion-dollar estate for years — now can’t agree whether to cremate or bury the 85-year-old woman after she passed away in February after a long battle with dementia.
The standoff has left Beatrice Hart’s body stuck at the Gutterman’s Funeral Home freezer in Woodbury, L.I. for over a month — and the home says it can’t hold on to it much longer.
“It’s now at the point we have to go forward otherwise I have to turn custody over to the Medical Examiner for possible indigent burial plans,” wrote Gutterman’s Funeral Home executive manager Christopher Tombline in a Mar. 9 email obtained by the Daily News.
“There’s no end to this. There’s no light at the end of the tunnel," Dean Hart, 62, said. “It’s been a complete nightmare for me.”
Dean, a Hicksville optometrist who ran for New York State Assembly in 2016, claimed his mother wanted her brain donated to science before her body was cremated.
His estranged sister Penny, who runs the family car insurance business in Jericho, argued the donation would go against their mom’s Jewish faith, court papers show.
On Mar. 9, Nassau County Supreme Court Judge Jack Libert decided there was no “medical reason” for Beatrice’s brain to be donated, according to court documents.
Now Dean wants his mother to be buried in accordance with Jewish tradition — but Penny still prefers cremation.
“She (mom) wanted two things. She wanted to give her organs to science, then cremate,” Dean said. “She was not permitted to her wishes. Now you want to cremate her in her entirety. That’s not what she wanted to do."
Dean Hart took the case to an Appeals Court, claiming Judge Libert failed to decide what to do with the body, but the case was sent back to the lower court.
A court spokesman said Judge Libert made no mistake in his ruling.
“The matter before the court had to do with the medical aspect, the autopsy, in which he rendered a decision,” said spokesman Lucian Chalfen. “The issue of cremation versus burial was not before the court and a motion regarding that issue was not made.”
In several emails sent to the siblings, the funeral home manager voiced frustration with the whole mess.
“We can’t hold someone here with an undetermined timetable much longer,” Tombline wrote in a Mar. 10 email. “You and your sister have to either BOTH approve cremation or BOTH approve burial.”
In a Mar. 23 email, Tombline noted that he was “getting very concerned” about next steps and added that nearby cemeteries would only allow a maximum of ten people to attend a burial, in light of the spreading virus.
Gutterman’s Funeral Home declined to comment.

The fight over Beatrice Hart goes back almost a decade, with both Dean and Penny Hart accusing each other over the years of mismanaging their mother’s health care and attempting to control her $5 million estate.

Penny Hart, 59, now blames her brother for complicating the situation with Beatrice’s body.

“He always wanted her to be cremated," she said. “Now that the court won’t let him do an autopsy, he wants to have her buried. I don’t know why he changed his mind. I don’t understand a lot of the things he does.”

Despite their differences, both brother and sister fear their mother’s remains being kicked to the curb and becoming the county’s property.