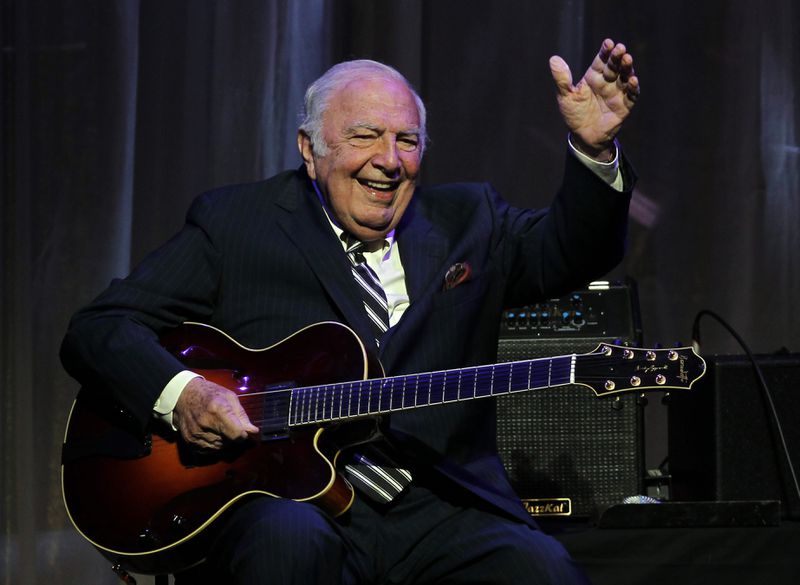 This 2011 photo shows jazz great John "Bucky" Pizzarelli after being inducted into the New Jersey Hall of Fame during the induction ceremony in Newark.(Rich Schultz/AP)


Jazz guitarist and New Jersey Hall of Famer John “Bucky” Pizzarelli died on Wednesday at his home, after testing positive for coronavirus on Sunday. Pizzarelli was 94.
Born in Paterson, Pizzarelli was an immensely respected sideman who played with a who’s who of musical icons from the 20th century over the course of an eight-decade career. Among those whom he worked with were Les Paul, Carly Simon, Paul McCartney and Frank Sinatra. And among his audience members were Presidents Ronald Reagan and Bill Clinton, as Pizzarelli played at three White House concerts in his lifetime.
He continued giving popular live performances at halls, clubs, and festivals in his home state up until just a couple of years before his death.
“The length and breadth of the work with all the different people was a testament to how hard he worked at it,” John Pizzarelli, Bucky’s son and an accomplished jazz guitarist in his own right, said to the Morristown Daily Record. “All kinds of people requested his services because he was the best at what he did.”
Fellow jazz guitarist Frank Vignola told the record, “Jazz guitar wouldn’t be what it is today without Bucky Pizzarelli. He and Freddie Green were responsible for a style of rhythm guitar playing that has lasted until 2020.”
Coronavirus on Wednesday also claimed the lives of music luminaries Adam Schlesinger and Ellis Marsalis.
Posted by free heip at 03:43