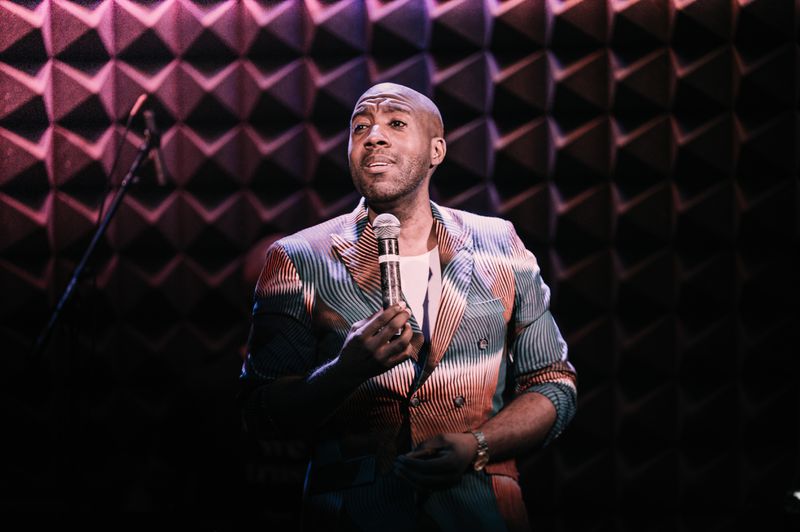 Jeremiah Abiah's re-imagined take on Madonna hits will be streamed as part of Joe’s Pub's shared concerts on YouTube.(Ronald Ji)


Get into the groove with Jeremiah Abiah, as the singer, songwriter and producer breathes new life into Madonna’s music this weekend.
The Ghanaian-American artist’s reimagined take on the Material Girl’s hits will be livestreamed Saturday during a weekly series organized by intimate concert venue Joe’s Pub, a program of the Public Theater in NoHo.
With a goal to serve as a social connection during this time of social distancing, the club has shared concerts with their audiences on YouTube each Thursday, Friday and Saturday at 8 p.m. for the past few weeks.
Abiah’s show, which will stream on Saturday, features his exploration of the pop music icon and master of reinvention.
Recorded on Feb. 16, 2019, the singer used his six-octave vocal range to breathe new life into gems popularized from the Material Girl.
“People thought I was crazy when I revealed Madonna as my next project,” the self-described “80’s kid” told the Daily News on Thursday. “Then last year, Joe’s Pub asked me to present the project there over two nights. Two sold-out nights was all the validation that I needed.”
Hits such as the Kenneth “Babyface” Edmonds-produced “Take A Bow,” the Dallas Austin-assisted “Secret” and the Reggie Lucas breakthrough “Borderline” are reinterpreted with Abiah’s signature style of blending blend of jazz, soul and classical music.
“Her music is the soundtrack to my childhood and I wanted to pay homage to that time,” he said, adding that he’s similar to the Detroit-area native born Madonna Louise Ciccone. “She is unique and a trendsetter. I feel I possess the same qualities and one of my strengths is my ability to reimagine music.”
The 75-minute concert, which also includes earthy renditions of “Lucky Star,” “Into The Groove,” “La Isla Bonita” and Madonna’s first international hit, 1983’s “Holiday," is a precursor for Abiah’s upcoming album, “Abiah Sings Madonna.” The album is planned for summer — maybe on Madonna’s 62nd birthday on Aug. 16.

“I really loved making the Nina project,” he told The News. “I have a love for re-imagining and strings. You will hear those similarities in the new project. However, Nina is such an influence of mine, that the music felt almost sacred.”

“’Abiah Sings Madonna’ is what I would call ‘chamber pop,’” he added. “It references my classical roots while also invoking Anita Baker, Imogen Heap, Cassandra Wilson and Sarah Vaughan. It feels like a modern ‘Love Jones’ soundtrack. I can’t wait for people to experience it.”

On Friday, Abiah released his cover of “Lucky Star,” as a buzz single.

The Rochester, N.Y., native thinks he may be onto something doing remake projects.

“Cover projects can be tricky but all the greats like Aretha, Nina, Sarah, Ella and the list goes on, created covers,” he said. “However they made them their own and that's what I offer. I understand myself to be one of the great song interpreters of my generation.”

When he’s not singing and performing, Abiah, who’s based in Harlem, works as a master vocal coach through The ABIAH Way Artist Development Firm. His client roster has included Grammy, Oscar and Emmy award winner Common, RCA Records acts Ro James and Jordan Bratton, and and Broadway talents including Arielle Jacobs, and Deonte Warren, among others.

The coronavirus crisis, he said, has had a devastating impact on his business and industry overall.

“It has affected my life tremendously, my entire income has been obliterated,” Abiah shared. “Most of my performances and touring have been canceled. It is the plight of most of my community and industry.”

But being able to connect with clients through Zoom video conferencing technology has provided some new normalcy.

“Vocal health means a tremendous amount to me and I’m always humbled by how many artists, record labels and Broadway artists who seek out my advice and most importantly vocal technique tutelage” he said. “The current crisis has had a tremendous impact on artists.”

He’s remaining hopeful and optimistic: “What I have found comforting is that we are all finding ways to still create beauty. It’s a necessary reset in the world and while it is challenging on all fronts, I know that this too shall pass.”

As far as being a part of the Joe’s Pub Live series, Abiah described it as an honor.

“We are all in this together. I think these streaming concerts have become necessary to feed the soul of audiences and artists alike.”

Joe's Pub director Alex Knowlton said the series, which was born as a response to the club’s doors being closed for the immediate future, has proven to be “a wonderfully mission-centric project as we all maneuver what it means to join together, remotely.”

“These streamed shows are meant to give the world a glimpse of the community of artists and performers who call Joe’s Pub home … we have found strength and joy in sharing a broad range of voices and stories represented on our stage,” he concluded.