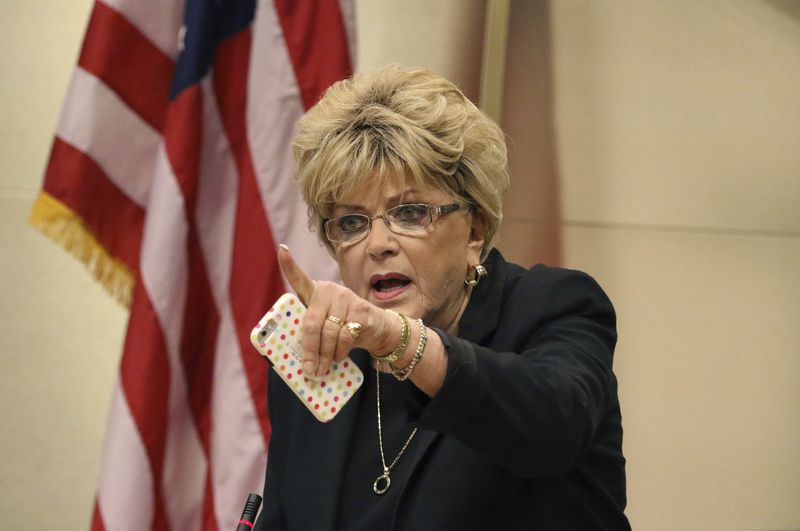 
The Nevada city’s casino workers are making their voices heard after Las Vegas Mayor Carolyn Goodman’s jarring remarks Wednesday that she wants casinos and restaurants to open back up after closing due to coronavirus, but that they’re on their own.
Goodman told CNN’s Anderson Cooper that figuring out how to open is “their job. That’s not the mayor’s job.”
She also said she was willing to offer up residents of the city as “a control group” to see how opening public places up amid the pandemic would affect the city.
Unsurprisingly, that didn’t sit well with those who work at these hotels.
“We’re not test subjects," Alexander Acosta, who works at the Caesar Forum Conference Center, told NBC News Wednesday evening. “We’re people. We are employees. We try to live every day as we can."
And though D. Taylor, the president of the union UNITE Here, which represents more than 300,000 hospitality workers nationwide, is eager to get back to work, he told NBC that no one wants to “be an experiment in a petri dish.”
Without stringent measures in place to enforce social distancing, temperature checks, and rigorous cleaning, it’s unlikely casino and hotel employees will feel at ease returning to normalcy. Some have no intention of returning until the right steps are taken.
“There’s no proper protocols in place anywhere,” security worker Dee Kenny, 64, who has underlying health issues, told NBC. “I’m not going to go back until I’m not at risk.”
Culinary Union Secretary-Treasurer Geoconda Argüello-Kline said that 11 of the union’s workers have died of coronavirus.

“The Las Vegas Strip is outside of Mayor jurisdiction,” she said in a statement via Twitter Wednesday. “What the Mayor of Las Vegas can do to help is to encourage the casino companies to pay their workers during entire closure ... We encourage listening to health experts and scientists."

Adding that the union mostly represents women and people of color, Argüello-Kline added, “We are not expendable. Workers will be the reason we get through this pandemic and workers have to be protected. We demand it.”

While casino worker Jay Blake understands the mayor’s urgency to restart the local economy, he doesn’t believe she’s “put a lot of thought into what it could mean if we reopen too soon,” and is particularly wary of the city’s popularity with guests from around the country and world.

“I’m concerned if we open to everyone, [there will be] people coming from hot spots, places with outbreaks, where social distancing wasn’t as stringent as it was here,” Blake, who also worries about asymptomatic carriers, told NBC.

After Goodman’s off-putting comments, Nevada Gov. Steve Sisolak said via Twitter that the city will reopen “when the time is right” to “ensure we are not only the most fun destination in the world, but the safest.”
Posted by free heip at 10:02