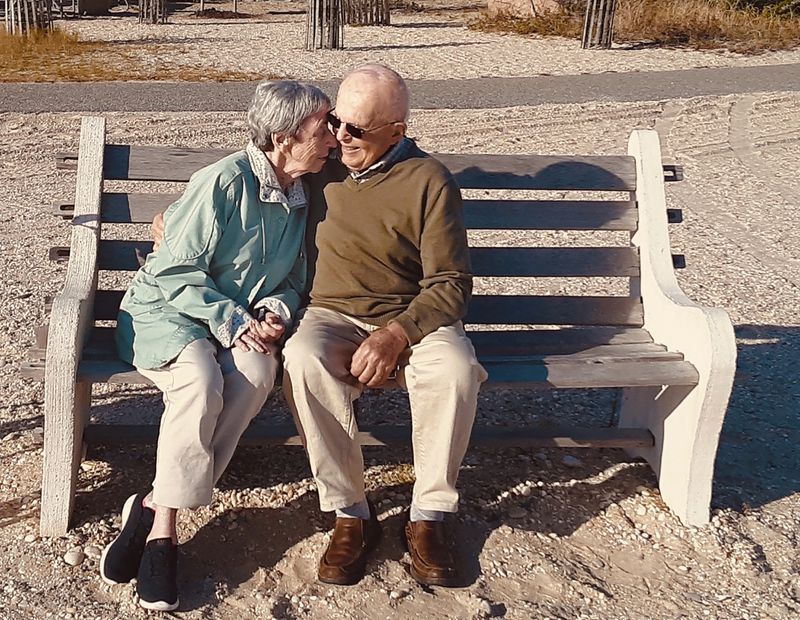 This undated family photo provided by Julia Chachere shows Joan and Ed Porco in Orient, N.Y. He was a by-the-book, buttoned-up conservative whose opinions could be quick and blunt. She was an authority-snubbing liberal who would draw stories out in meandering conversation. Both fell victim to the new coronavirus, only days apart.(Julia Chachere/AP)


He was a by-the-book, buttoned-up conservative whose opinions could be quick and blunt. She was a free-thinking, authority-snubbing liberal who would draw stories out in meandering conversation.
In the pain of broken marriages, Edward Porco and Joan Powers found new life in each other, however mismatched they might seem. And as the coronavirus pandemic consumed the world, they both fell victim to it.
"This was such a unique love," says Julia Chachere, the daughter of Joan, who was 90, and stepdaughter of Ed, who was 89. "And it nurtured and fed them both so well right up until the end."
The pair met on New Year's Eve in 1959, at a party with pulsating Latin music and an Episcopal priest at the drums. They found themselves in a heated political discussion that bared the truth to Joan.
"No doubt about it," she would later write, "the man was both Republican and conservative, anathema to me."
Whatever political distance between them, Joan and her then-husband and Edward and his then-wife became friends in the years that followed. When those marriages eventually unraveled, they had in one another a listening ear. And, in time, they were taken aback when it grew to something more.
"It was a surprise to both of them," says Matthew Chachere, another child of Joan and stepson of Ed.
Here she was, a Brooklyn-born Jewish girl who saw an idol in FDR and a home in protests, a methodical, thoughtful teacher-turned-reporter-turned-therapist who never let a rule get in her way.
Here he was, a Bronx-born Italian boy, a commodities broker and Republican committeeman who'd cheer the likes of Richard Nixon, who prized punctuality and planning and order.
And they were in love.
"There was so much mutual respect for their differences," Julia says of the couple, who spent their final years in Greenport, New York, a village on Long Island. "They didn't try to change the essence of who the other was."
They wed in a simple ceremony on Nov. 18, 1977, at the Nassau County Courthouse, but the marriage brought no immediate end to their differences. She could be messy; he made sure even his tackle box was picture-perfect. She would drape herself in bright splashes from thrift store racks; he was colorblind and sometimes plain. She would wander wherever she pleased — be it a stranger's yard or an abandoned home or Bernie Madoff's estate — while he would shudder at the thought.
Sixteen months into their marriage, Joan summed up where things stood in her poetry, a passion she began turning to after a daughter's suicide. She titled it: "To Edward, In Celebration."
It went: "We are so different, you and I / But there is that part of us / Where the I and the Thou can meet / And by this convergence / Provide the manna / To feed our unique selves."
To the end, they savored their individuality, but some things that separated them faded. Ed even was coaxed from his staunch Republican roots to be found beside his wife volunteering at campaign phone banks for candidates whose party affiliations would've made him gasp decades earlier.
They traveled voraciously on hiking trips, returning to Montauk, Long Island, which they adored and worked to protect. They hung a driftwood sign outside their home with the name they gave it: "Gaudeamus," Latin for "Let us rejoice."
He sang Italian songs in the shower; she'd concoct a silly dance for a grandchild. He went back to school to study history; she took up a new instrument, the hammered dulcimer.

He called her "baby," and stared at her like he was a smitten teenager. When a reporter for the local news website Patch visited with them four years ago for a Valentine's Day feature, she found them finishing one another's sentences, holding hands, laughing and hugging.

"He's the most important part of my life," Joan said as Ed took her hand and said: "She completes me."

They moved to a retirement community apartment and Alzheimer's began to rob Joan of the words she so effortlessly put to paper or pursed lips. Ed diligently tended to her every need. Time brought another level of patience in him, and a new dose of sweetness in her. Six months ago, she moved to a nursing home in the same complex. Ed visited every day, reading her poetry or the newspaper.

No one expected the end the way it came, a blur of rising fevers and careening ambulances and whooshing ventilators. Ed died on March 24 and Joan four days later, each of them alone in different hospitals. Neither knew the other's fate. Julia thinks it was better that way.