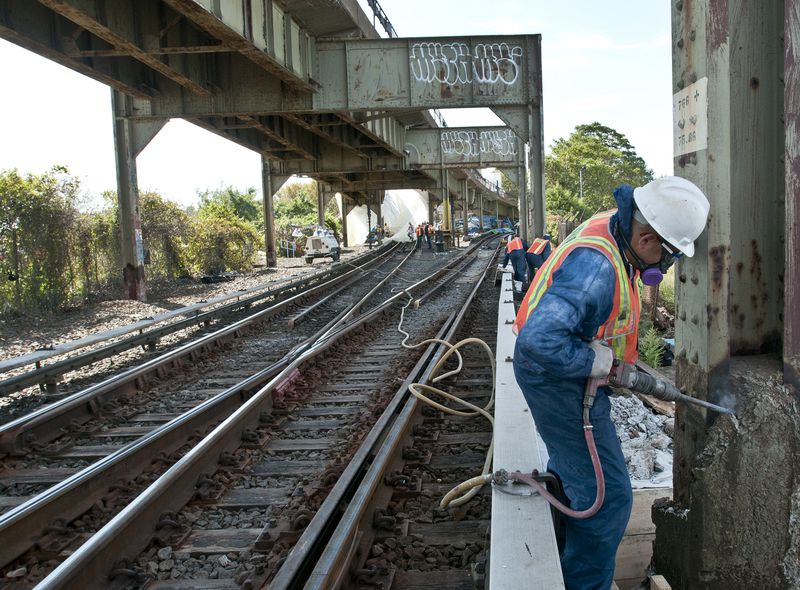 A construction worker repairs a pier on the South Channel Bridge, which carries the A train across Jamaica Bay between Broad Channel and the Rockaway Peninsula.(Metropolitan Transportation Authority / Patrick Cashin)


Strict safety measures have helped nearly 500 MTA construction projects move forward during the coronavirus pandemic with surprisingly few hiccups.
Transit honchos began on to institute aggressive rules meant to curb the spread of COVID-19 among construction crews on March 9, when the number of confirmed cases in New York City first exceeded 100, said Metropolitan Transportation Authority chief development officer Janno Lieber.
That’s helped the MTA keep up with its big-ticket transit projects, including the massive East Side Access project to bring Long Island Rail Road service to Grand Central Terminal and the ongoing effort to overhaul the subway’s outdated, delay-inducing signaling system.
Workers at MTA job sites must receive a regular temperature check and refrain from sharing tools or tight spaces.
Lieber said his team has established a zero tolerance rule for working while sick, and the MTA has developed a smartphone app to report any impacts the outbreak has on the progress of projects. They’ve even distributed a detailed flowchart that helps supervisors decide who should be quarantined.
The pandemic has forced roughly 90% of the non-construction workers on Lieber’s team to work from home — including managers, engineers, designers, planners and estimators.
The agency has come up with some innovative ways to adapt. At construction sites, workers with GoPro cameras record videos that let Con Edison crews and others involved in projects perform remote job site inspections.
“Part of this has just been learning how to work with social distancing, part of this has been the result of innovation,” said Lieber. “I think this has actually given us a chance to create a more cohesive organization. That seems counter-intuitive, but, because of this experience, everyone had to learn how to get work done together, but remotely.
The on-the-fly changes and safety measures have proven to be incredibly successful.
Lieber said 95 of the 5,400 contractors and consultants that work with the MTA’s construction department have reported positive cases of coronavirus, while just nine members of the agency’s in-house construction team has contracted the disease.
That’s less half rate of infection seen at the rest of the MTA. The agency on Monday reported nearly 3,000 confirmed cases of COVID-19 across its 71,000 employees, with another 79 deaths from the virus.
The low case count has helped minimize the impact on construction. The agency on Tuesday reported work on 24 of 516 ongoing projects had stopped as a result of the virus. down from 38 work stoppages earlier in the pandemic.
The delayed projects include work to make 15 more subway stations handicap-accessible and the overhaul of the Times Square Shuttle, which has been shut down during the crisis.

“It’s too early to declare victory, but we have hit important milestones on virtually all of our projects,” Lieber said.

But it’s not all sunshine and rainbows in Lieber’s camp. The crisis has forced his team to hold off on committing new money to construction projects through the agency’s $51.5 billion five-year capital plan, which promised to rapidly upgrade New York’s lousy mass transit infrastructure.

Still, as long as there’s work to do, the MTA’s master builder said he plans to finish it on time and on budget.

“Part of the culture of New York’s union construction workforce is patriotism and public spirit,” said Lieber. “When 9/11 happened, when Hurricane Sandy happened, these guys love to show up and show what they can do — and they’ve done it again.”