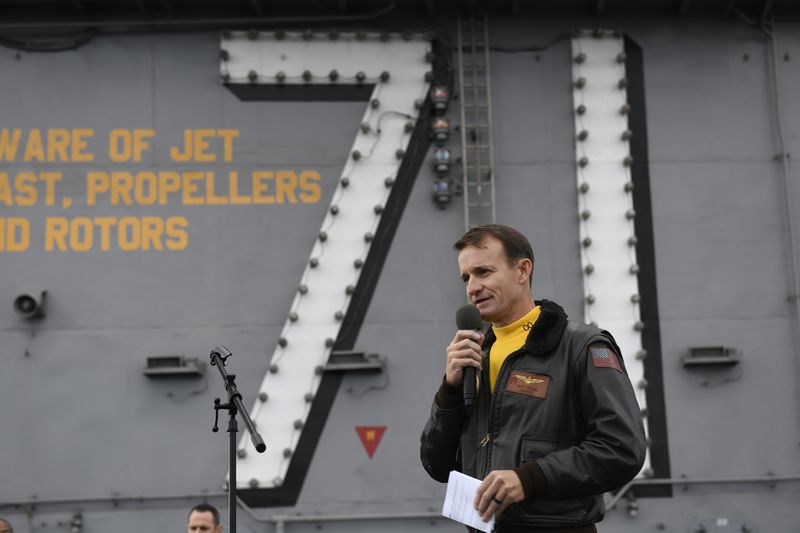 
Acting Secretary of the Navy Thomas Modly apologized late Monday after his message to the crew of the USS Theodore Roosevelt, during which he attacked ousted Captain Brett Crozier, was leaked.
Modly accused Crozier of a “betrayal” after his letter to his superiors, which begged for help and supplies as coronavirus spread through his ship, was published in the San Francisco Chronicle.
“It was a betrayal. And I can tell you one other thing: because he did that he put it in the public’s forum and it is now a big controversy in Washington, DC,” Modly told the crew Monday, according to a transcript obtained by CNN.
Modly also accused Crozier of being “too naive or too stupid” to be in charge.
Late Monday, amid calls for his resignation, Modly issued a public apology.
“Let me be clear, I do not think Captain Brett Crozier is naïve nor stupid. I think, and always believed him to be the opposite,” he said in a statement.

“We pick our carrier commanding officers with great care. Captain Crozier is smart and passionate. I believe, precisely because he is not naive and stupid, that he sent his alarming email with the intention of getting it into the public domain in an effort to draw public attention to the situation on his ship. I apologize for any confusion this choice of words may have caused.”

Modly also apologized specifically to Crozier, his family and the crew for “any pain my remarks may have caused."

Crozier was fired last week after his plea was made public.
Posted by free heip at 08:08