NYC reports at least 3,602 people dead from coronavirus as confirmed cases near 78,000 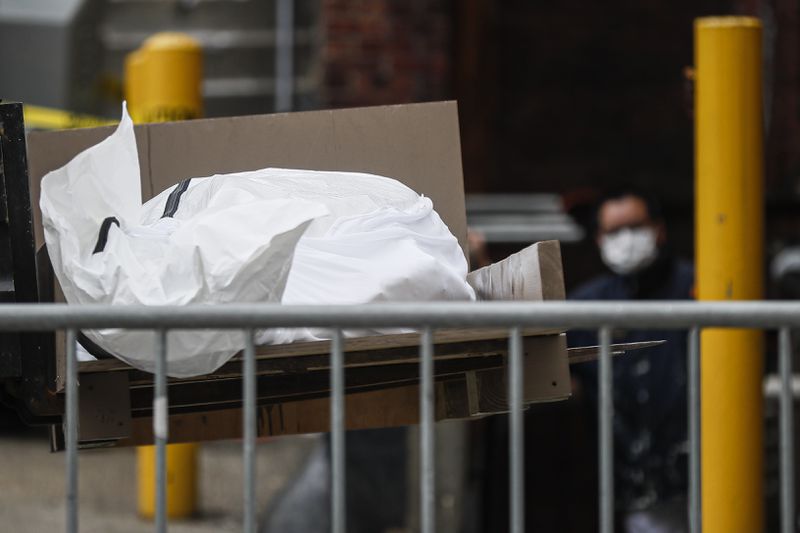 A body wrapped in plastic is loaded onto a refrigerated container truck used as a temporary morgue by medical workers due to COVID-19 concerns at Brooklyn Hospital Center in Brooklyn.(John Minchillo/AP)


New York City reported 400 new deaths from coronavirus in less than 24 hours as the number of confirmed cases grew to nearly 78,000 on Wednesday morning, health data shows.
There were 77,967 confirmed cases of COVID-19 as of Wednesday at 9:15 a.m., up by 5,643 since 9:30 on Tuesday morning, according to the city Health Department.
The city reported 3,602 people died of coronavirus by Wednesday morning, an increase of 12.5% from the 3,202 death toll the day before.
But the state’s tally of confirmed cases and those who have died from coronavirus in the five boroughs is different than the city’s own count. The state reported more than 4,000 deaths from coronavirus in the city as of Tuesday.
The city and state said Tuesday they’ll begin using the same set of coronavirus-related data after the Daily News flagged discrepancies in their reporting, though the numbers weren’t synced as of Wednesday morning.
Officials have also cautioned that the number of people infected with COVID-19 is likely far higher than confirmed cases because many New Yorkers can’t or won’t be tested. Mayor de Blasio also said this week that the city is also likely undercounting the coronavirus death toll because hundreds of people are dying at home without being diagnosed with the disease.
The average age of people who tested positive for coronavirus in the city is 50 and 51% of all 77,967 confirmed cases were in New Yorkers 50 years or older, according to the city’s Health Department. Fifty-four percent of cases are in men.

Most of those who have died were older and or had preexisting health conditions that make them more vulnerable to the virus, including diabetes, asthma, lung disease, cancer and immunodeficiency.

Seventy percent of those who have died were at least 65 years old and nearly 74% had underlying health conditions, according to the city Health Department. Nearly 60% of people who died were men.

Queens still has the most confirmed cases and reported deaths of all five boroughs, though the Bronx has more people who tested positive per capita.

There were 25,715 confirmed cases in Queens and 1,136 deaths as of Wednesday morning, city health data shows.