NYC ‘running out of time’ to get personnel, equipment to treat coronavirus patients through next week: Mayor de Blasio 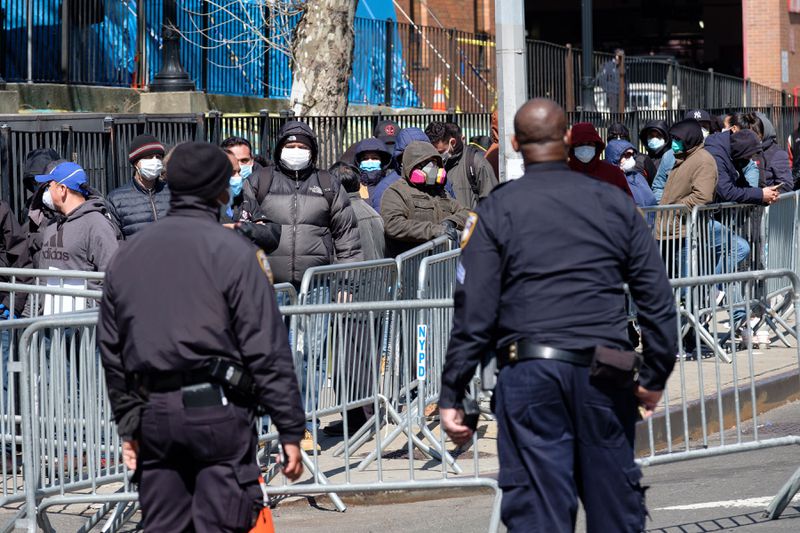 People line up for coronavirus testing outside Elmhurst Hospital in Queens.\


Mayor de Blasio continued to sound the alarm Friday that New York City doesn’t have enough medical personnel or equipment to get through next week, when hospitals are expecting a surge in coronavirus patients.
The mayor said the city only has enough ventilators to get through Sunday or Monday and that soon medical personnel won’t be able to closely monitor every intubated patient with coronavirus struggling to breathe.
“If we have the personnel, if we have the equipment, lives are going to be saved, if we don’t, people will die who did not need to die,” de Blasio said on CNN Friday. “As of Sunday we start to run out of ventilators, we start to get really stressed in terms of our personnel.”
De Blasio said the city will “easily” see 5,000 or more people who need to be intubated and in ICUs with ventilators by Monday or Tuesday.
“We’re running out of time….we have literally days,” the mayor said on MSNBC.
Hizzoner called on the federal government to not only mobilize the military, deploying doctors and others to the front lines of the crisis in New York, but institute an essential draft to enlist private medical personnel.

“Unless there is a national effort to enlist doctors, nurses, hospital workers of all kinds and get them where they’re needed most in the country in time, I don’t see, honestly, how we’re going to have the professionals we need to get through this crisis,” de Blasio said on MSNBC Friday.

If that is not done in the coming days, you’re going to see people die who did not need to die, not just in New York, but in many parts of this country,” he added.

De Blasio called for the federal government to deploy 1,000 nurses, 150 doctors and 300 respiratory therapists by Sunday but said he hadn’t gotten an answer more than a week after the request.

The city has seen 10,590 total people hospitalized for coronavirus as of Thursday night, when the number of confirmed cases reached 49,707. So far, 1,562 people have died.

“Time is running out,” de Blasio said on MSNBC. “Next week is going to be a lot tougher.”
Posted by free heip at 07:30