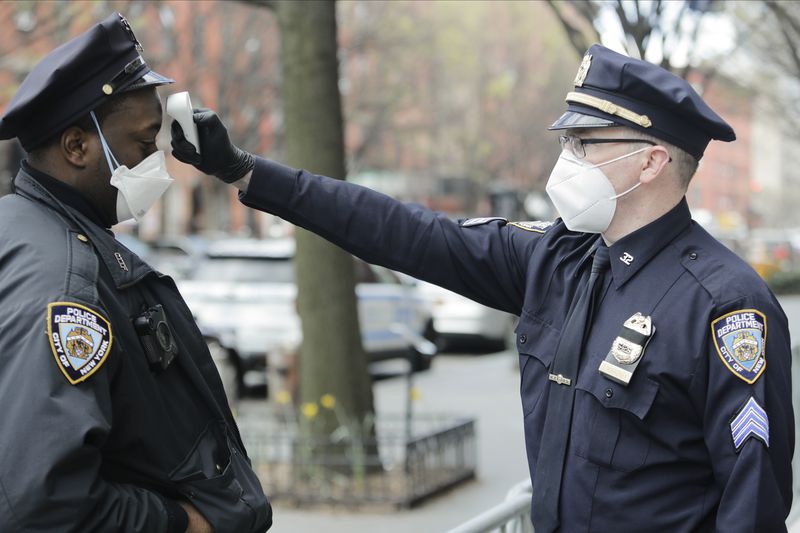 Officer Mahoney, right, checks the temperature of all people entering the 32nd precinct of the New York Police Department in an attempt to stem the spread of the new coronavirus Wednesday, April 15, in New York.(Frank Franklin II/AP)


The NYPD is handing out protective suits for cops to wear if they respond to a hospital, Police Commissioner Dermot Shea said Thursday.
The initiative, along with a plan to have every cop get their temperature taken when they arrive for their shift, comes as the number of cops testing positive for coronavirus has been outpaced this month by the number of sick cops returning to work.
“The light’s at the end of the tunnel, I think,” Shea said in an address to the rank and file. “But we have some hard days ahead, too.”
Shea said that the number of cops out sick has dropped each day this month and stood at 17% of the force Thursday morning — a little more than 6,000 people. That’s down from a high of about 20%, or about 7,200.
Thus far, 4,190 cops have contracted the virus but 1,450 have already recovered and returned to work, though two got sick again and have returned home.
All told, 27 NYPD members have died from coronavirus — five detectives and an officer, five school safety agents, four traffic enforcement agents, plus seven other civilian members of the department and five volunteer auxiliary officers.

Detectives who respond to homes to investigate deaths linked to coronavirus or at least suspected of involving the disease have been wearing Tyvek suits.

Now, Shea said, officers are being equipped with packets that contain protective outerwear, including booties. They should wear them if, for instance, they are called to a hospital to interview an assault victim.

“If you are going to a hospital as part of your function you shouldn’t be going in there blind,” Shea told his officers. “Make sure you’re wearing the appropriate protective wear.”

The NYPD this week started a pilot program at eight precincts where every cop who shows up for work gets their temperature taken before entering the stationhouse.

By next Friday, Shea hopes to have temperature taking in place at every police facility in the city.
Posted by free heip at 11:14