Of lives, leadership and laying blame: Coronavirus in New York 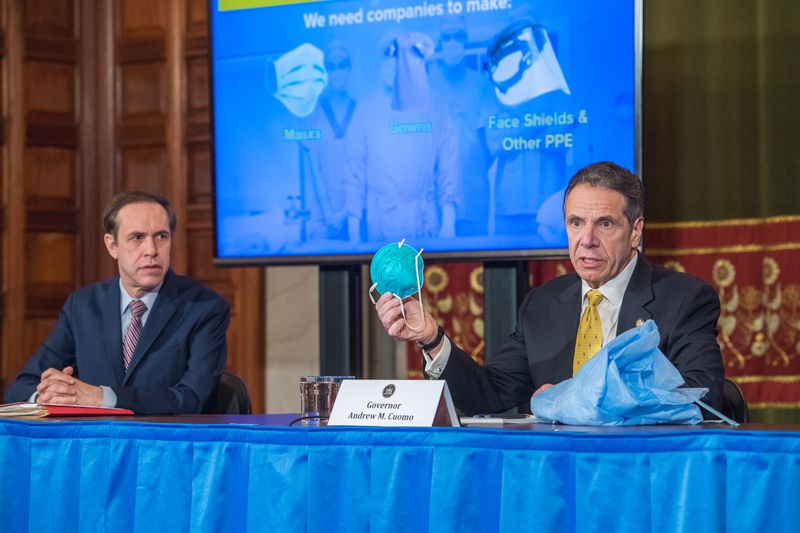 “We’re all trying to make sense of something we’d never dealt with before, every single day” Mayor de Blasio said Friday, when asked about his decision to keep public schools open until just two weeks ago and as he lobbied, again, for more critically needed help from the Trump administration.
The coronavirus apex is still looming in New York, and with the medical system struggling to keep pace “that’s where all our focus should be right now as a nation,” said de Blasio, whom I’ve dunked on in many a column for his endless buck-passing and deflection.
“When the smoke clears, when this crisis is over,” he continued. “then we can figure out what we need to learn from it. But right now, how could we not be on a war footing?”
For once, he’s right to deflect and look ahead. We’ll have plenty of time after this wave has crashed — and precious little time left to keep building our defenses — to assess the mistakes our leaders made as it was rising.

Meantime, we are, once again, fetishizing the performance of leadership, as with the torrents of praise pouring down now on de Blasio’s longtime frenemy, Gov. Cuomo, whose daily briefings demonstrating a command of the facts along with an ability to emotionally connect that until now had been associated with his father, Mario, have become appointment viewing for many, and a sort of implicit rebuke to President Trump’s unhinged and off-the-cuff style.
PowerPoint-driven updates are now a thirst trap, apparently, with calls for Democrats to dump Joe Biden and run Cuomo for president, and even a wave of essays about the governor’s sex appeal.
I get it; there are a lot of writers a little loopy from fear and isolation. And after years of playacting the Man of Action, Cuomo has found his moment.
It’s the sort of moment Rudy Giuliani found after 9/11, when he spoke with eloquence and clarity about what had just happened as George W. Bush struggled to find his voice. Oprah Winfrey anointed Rudy “America’s Mayor” at “A Prayer for America” at Yankee Stadium less than two weeks later, days before Giuliani wrongly said “the air quality is safe and acceptable” and years before scrutiny of his earlier decision to move the Office of Emergency Management into the World Trade Center complex, where it was destroyed in the attack.
Still, his September performance was powerful enough to remake the unpopular outgoing NYC mayor in August of 2001 into the early Republican presidential frontrunner in 2008, before Joe Biden helped cut him down to size with that line about a noun, a verb and 9/11.

It’s the sort of moment Cuomo’s old Port Authority pal Chris Christie had with Hurricane Sandy, and barking at Jerseyans to “get the hell off the beach!”
In April of 2002, when pols were still taking pains not to politicize 9/11, Cuomo famously dismissed George Pataki (who’d ousted Mario from the governor’s mansion) as someone who “stood behind the leader,'' meaning Giuliani. “He held the leader’s coat. He was a great assistant to the leader. But he was not a leader.”

Cuomo, who as governor is fundamentally more powerful than the mayor, has long made it clear that he sees himself as the leader in New York.

And de Blasio has done himself no favors by having his NYPD detail drive him to Park Slope for one last workout the day before gyms closed and now to Prospect Park for walks, or by encouraging New Yorkers in early March to keep using the trains and then to get a last drink the night before the bars shut down, and on and on.

But, as I said, this is no time for dunking.

Performing leadership is a talent, and people appreciate those performances when they’re scared and uncertain. But resolve can come with its own problems (see, for starters, the War on Terror).

Finally, talk is cheap. Our leaders will be judged by their actions, and, knock on wood, how those actions see us through this health war.
Posted by free heip at 05:43