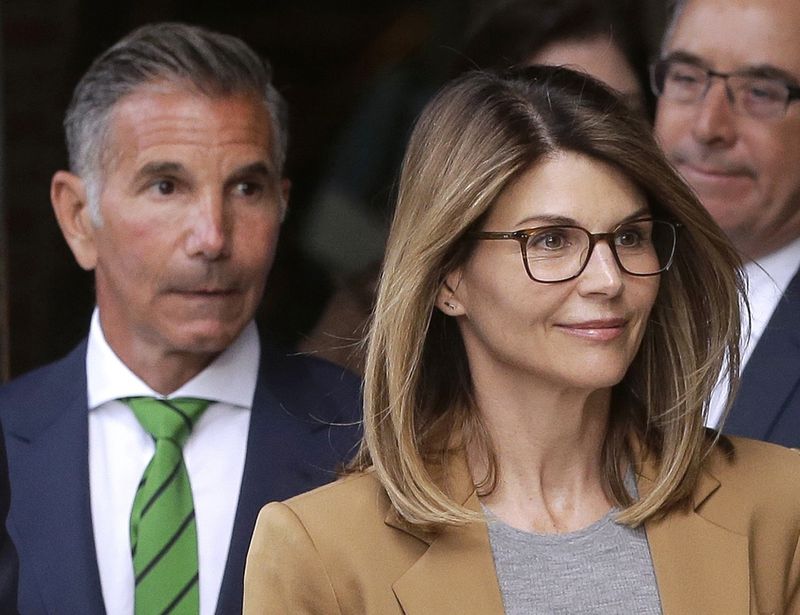 
Prosecutors in the college admissions cheating scandal have released hundreds of pages of evidence in the case, including the infamous rowing photos “Full House” star Lori Loughlin is accused of using to get her two daughters into college.
The 387-page document was filed this week in response to the defense team’s long-shot motion to dismiss the charges against the embattled actress, her fashion designer husband and nearly 17 other parents.
The never-before-seen images show Loughlin and Mossimo Giannulli’s daughters posing on indoor rowing machines to bolster their fraudulent athletic profiles, which were then used to get them accepted into the University of Southern California as crew team recruits even though they had no competitive rowing experience, prosecutors claim.
Federal authorities blurred the girls’ faces in both photos and redacted their names from the document, but the details released in the case since the couple was arrested in March 2019 make it clear that the images feature video blogger Olivia Jade, their younger daughter, and Isabella Giannulli, who was the first to be accepted into USC.
The newly released document includes a damaging email written by convicted mastermind William “Rick” Singer, the college consultant who admitted running the conspiracy for nearly a decade.
“I need a PDF of her transcript and test scores very soon while I create a coxswain portfolio for her,” he allegedly wrote in the August 2016 message, which appeared to refer to the couple’s older daughter.
“It would probably help to get a picture with her on an ERG in workout clothes like a real athlete too,” Singer reportedly said.
Mossimo Giannulli replied hours later.
“Fantastic. Will get all,” he reportedly wrote.
The photo was sent days later, according to the document, and Isabella Giannulli was accepted into USC on Nov. 4, 2016.

The following year, the couple repeated the same process for Jade, prosecutors allege.

The scheme cost them $500,000 in bribes, which were submitted to the university and Singer’s sham charity as donations, according to the U.S. Attorney’s Office in Boston, which uncovered the scheme.

This week’s lengthy memo also suggests the two daughters may have been aware of the scam the entire time. Besides the staged photos, undated text messages included in the document appears to show a conversation between either Loughlin or her husband with another defendant who was aware of the scheme.

“We don’t have a lot of secrets here. She has been an integral part of all discussion. Start to finish,” the text message says, in an apparent reference to one of the daughters.

ederal prosecutors say Singer and several accomplices helped dozens of parents get their kids into elite colleges by cheating on SAT and ACT exams or through fake athletic profiles. More than 20 of them have pleaded guilty, including “Desperate Housewives” actress Felicity Huffman, but Loughlin, her husband and more than a dozen others continue fighting their charges.