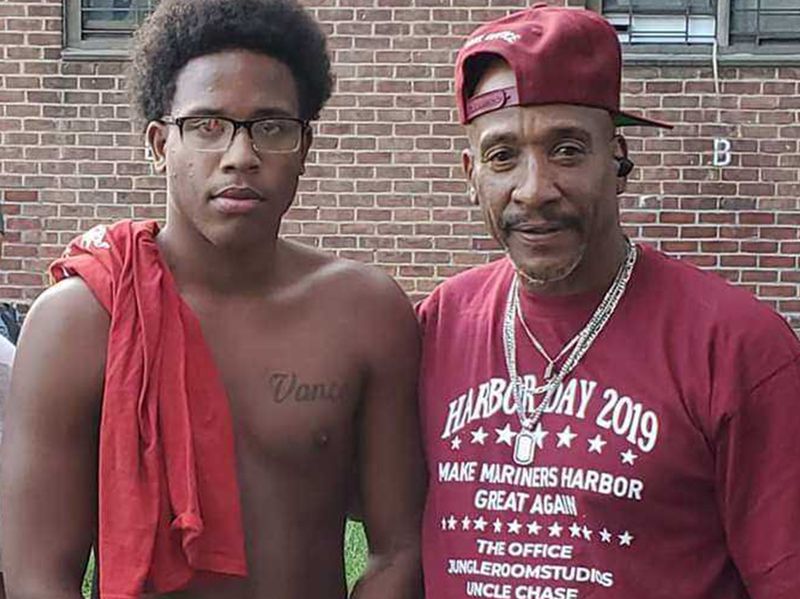 
A Staten Island dad, his heart broken and emotions raw, said Wednesday he’d been on the phone with his adored son around the same time the young man was mercilessly shot in the head and killed.
Vincent Witt Sr., told the Daily News the Tuesday afternoon contact with his 20-year-old namesake, Vincent Witt Jr., was unsettling — but by the time the frantic father found his son, it was too late.
“I was on the phone with him yesterday when this took place,” he told The News, his voice cracking with grief and anger. “And when I got to the scene I found my son dead.”
Witt Jr. was struck with a bullet just before 4 p.m. on Park Hill Ave. near Sobel Court in Clifton, police sources said. He stumbled about one block to Bowen St. before collapsing.
That was the same time Witt Sr. said he was talking to his son. But during the conversation, his son suddenly stopped responding.
“I didn’t hear anybody talking, I’m just hearing (noises),” he explained, adding that he could hear wind and some shuffling. “I’m yelling, ‘hello, hello, hello,’ but he didn’t answer, so I hung up. I called back, and he didn’t answer.”
Shortly afterwards he got another call with an ominous report about Witt Jr.
“Someone called that knows me, and said, ’Did you hear your son got shot?’ and I said, ‘What do you mean, I just got off the phone with him,’” he said. “It had to happened right then and there.”
A suspect was being questioned in the case, but no charges have been filed, police said Wednesday. The circumstances around the shooting remain unclear.
“People will tell you, my son was no trouble at all, never been in trouble with the law, none of that, that I know about anyway,” Witt Sr. told The News.
Police sources said the young man had no criminal record.
Witt Jr. was born premature in 1999, weighing just 1 pound, 14 ounces, along with his twin brother Vance, who died 10 days later, the father said. Vincent spent another two months in the hospital before he came home.
When he was around 13, his mother passed away, something the young teen struggled with emotionally, his father said.

“When his mother left, there’d been a lot of change in him … emotionally,” he explained, though he said he and his son remained very close.

“I’ve been in his life all his life,” he said, stressing that he and his son spoke every day and had just shared dinner together on Sunday.

“My son was a good boy, he loved basketball,” Witt Sr. said. “I know you hear that story all the time, but that’s what happens when you live in the hood.”

Fighting back tears, he said he couldn’t understand why anyone would shoot his son.