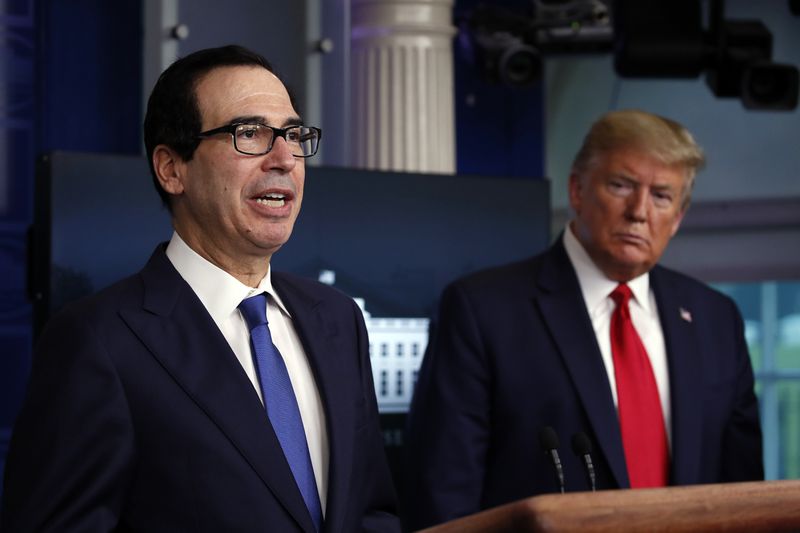 President Trump listens as Treasury Secretary Steven Mnuchin speaks about the coronavirus in the James Brady Press Briefing Room at the White House in Washington.(Alex Brandon/AP)


WASHINGTON (AP) — The Trump administration and Congress expect an agreement Monday on an aid package of up to $450 billion to boost a small-business loan program that has run out of money and add funds for hospitals and COVID-19 testing.
As talks continued, President Donald Trump said there's a "good chance" of reaching a bipartisan agreement with Democrats.
"We are very close to a deal," Trump said Sunday at the White House.
Along with the small business boost, Trump said the negotiators were looking at "helping our hospitals," particularly hard-hit rural health care providers.
The Senate is scheduled for a pro forma session Monday, but no vote has been set.
The House announced it could meet as soon as Wednesday for a vote on the spending package, according to a schedule update from Majority Leader Steny Hoyer, D-Md.
With small-business owners reeling during a coronavirus outbreak that has shuttered much economic activity, Treasury Secretary Steven Mnuchin said he was hopeful of a deal that could pass Congress quickly and get the Small Business Administration program back up by midweek.
"I'm hopeful that we can get that done," Mnuchin said Sunday.
Senate Minority Leader Chuck Schumer, D-N.Y., also said he believed a deal could be reached. "We still have a few more details to deal with," he said.
The emerging accord links the administration’s effort to replenish a small-business with Democrats’ demands for more money for hospitals and virus testing. It would provide $300 billion for small-business payroll program, and $50 billion would be available for the small business disaster fund. Additionally, it would bring $75 billion for hospitals and $25 billion for testing, according to those involved in the talks.
On a conference call Sunday afternoon that included Trump, Mnuchin and Republican senators, Senate Majority Leader Mitch McConnell, R-Ky., indicated the only remaining item for discussion involved the money for testing, according to a Senate GOP leadership aide who spoke on condition of anonymity to discuss a private call.
But Democrats have been insisting on boosting funding to cash-strapped states and local governments whose revenues have cratered. In weekend talks, they had proposed $150 billion for the effort.
"We are pushing hard," Schumer said.

But Mnuchin and McConnell reiterated on the call with senators that money for state and local governments as well as food stamps would not be included in the package, according to the GOP aide.

"The president is willing to consider that in the next bill, but wants to get this over the finish line with a focus on small businesses, hospitals and testing," Mnuchin said.

He said he's been in touch with GOP leaders including House Minority Leader Kevin McCarthy, R-Calif., and all are "on board with the same plan."