Virus sends Holocaust survivors behind doors, back in time 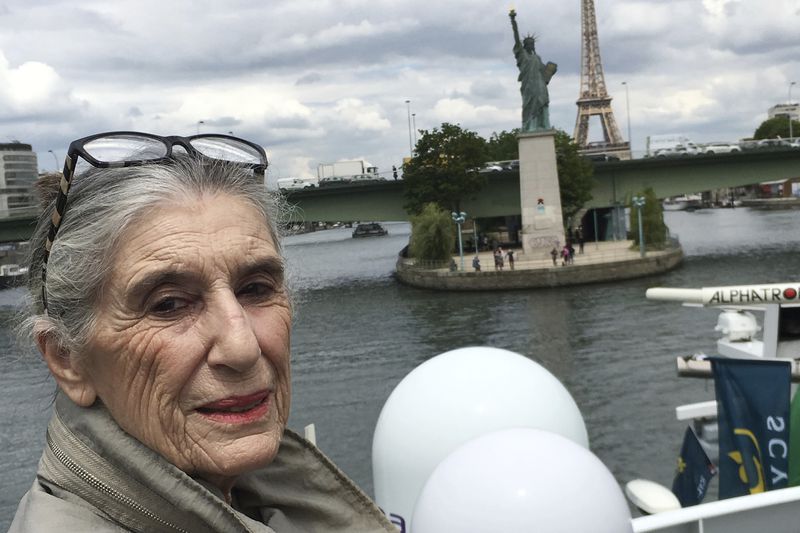 This 2019 photo provided by Olga Weiss shows her in France. For Weiss, the order to stay at home is about much more than simply locking her door to the coronavirus. It has awakened fears from decades ago when she and her parents hid inside for two years from Nazis hunting down Jews in Belgium.(Olga Weiss via AP)


OAK PARK, Ill. (AP) — For Olga Weiss, the order to stay at home is about much more than simply locking her door to the coronavirus. It has awakened fears from decades ago when she and her parents hid inside for two years from Nazis hunting down Jews in Belgium.
“It is almost an echo of when we were young, when we were children, the same feeling of not knowing what will happen next,” said Weiss, 83. “We aren’t thinking about the virus; we are thinking of what happened to us” back then.
Close to 400,000 survivors of the Holocaust are believed to be alive worldwide, and for many elderly Jews the coronavirus pandemic has dredged up feelings of fear, uncertainty and helplesness not felt since they were children during that dark period.
While the fast-spreading virus has caused fear and the reliving of trauma for many in the general public, Yael Danieli, a psychologist and director of the Group Project for Holocaust Survivors and their Children, said the emotional toll can be particularly acute for survivors of the Nazi genocide.
“They are not living though this — they are reliving it,” Danieli said.
Not everyone reacts the same way. Some Holocaust survivors see their role in today’s pandemic as setting an example for how to survive, how to fight back, according to Danieli.
But parallels that may seem extreme to others can push their way unbidden into traumatized minds: The fear of hospitalization, akin to the idea of going to a camp from which you don’t come out, she said, or sheltering in place feeling like a “return of the horrific times when you had to hide from the world in order to survive.”
The issue is compounded by the fact that Holocaust survivors are elderly, since old traumas can resurface naturally with advancing age even in pandemic-free times. Nursing homes, for example, know a trip to the shower can trigger elderly Jewish residents.
That’s something Colette Avital, who emigrated after World War II from Romania to Israel, served in parliament and now chairs the Center Organizations of Holocaust Survivors in Israel, saw firsthand when her mother approached death years ago at age 97: "She was shrieking at night, ‘the Nazis are coming!’”
Today such fears are only magnified, she added, because people know there really is a menace lurking outside their doors: “This has got them panic-stricken.”
André Stein, who was attacked in a Budapest bread line last century by thugs who left him for dead on a pile of bodies, said a difference with the virus is that the enemy is unseen: “Now you can walk down the street and somebody sneezes on you, and you may be killed,” said Stein, 83, a Toronto resident and author of “Hidden Children: Forgotten Survivors of the Holocaust.”
For most people the coronavirus causes mild to moderate symptoms such as fever and cough. But for some, especially older adults and the infirm, it can cause pneumonia and lead to death.
So at 88 years old, “I don’t go outside much,” said Sidney Zoltak of Montreal, who as a boy sneaked with his parents from one hiding place to the next in Poland, including seven months in an underground bunker with no sunlight.

Zoltak considers himself fortunate because his days are filled with writing, talking with a son who drops food off on his doorstep, video chatting with grandchildren and communicating with fellow Holocaust survivors. This week he celebrated what he called a “virtual Passover” with family via FaceTime. But he knows others aren’t so lucky, cut off from family and left to dwell on their fears.

The understanding that Holocaust survivors are a vulnerable population led to this week’s announcement by the New York-based Conference on Jewish Material Claims Against Germany of $4.3 million in grants to agencies around the world that provide care for 120,000 survivors.

Weiss, who lives in suburban Chicago and coordinates a group of about 20 other “hidden children” from the Holocaust, used the phrase “as silly as it sounds” to couch her comparison of how things felt during the war, when starvation was a real possibility, to today’s crisis, when stores are simply running low of certain items.

She knows that today she does not have to keep quiet, that the Gestapo isn’t lurking outside her door, that the simple pleasure of listening to music doesn’t risk discovery and death.

But “it feels the same,” Weiss said. “It is the same fear of what will happen to us ... (that) we had at the beginning of our lives, and now at the end.”