Why Bernie bit the dust this time around: He couldn’t embrace a patriotic American narrative 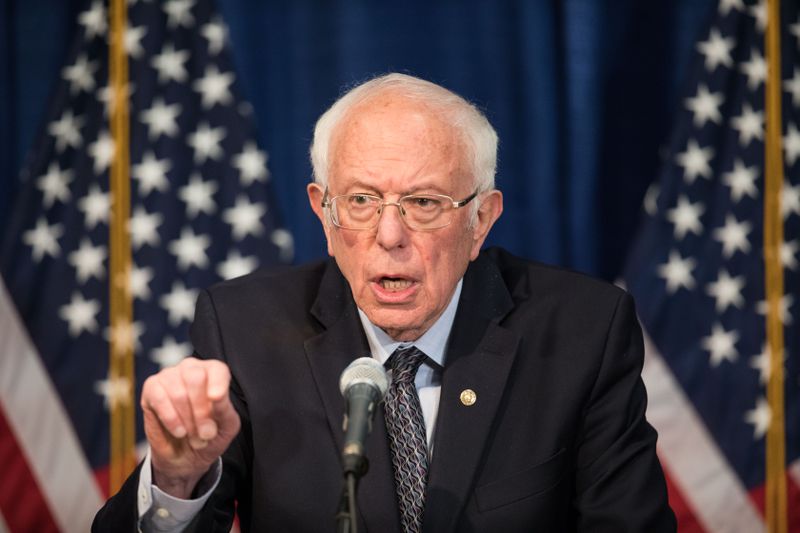 
Why didn’t Bernie Sanders ever wear an American flag pin?
No, affixing a small piece of patriotic metal to his coat lapel would not have single-handedly solved all the manifold problems that ultimately doomed Sanders’ five-year campaign for the presidency.
But it was one of many cost-free gestures that he declined to make in service of presenting himself as a palatable nominee to “mainstream” Democratic voters.
Despite the bountiful advantages Sanders had entering the 2020 primary race — universal name recognition, virtually unlimited funds, a nationwide organizing network, and strong runner-up status from the previous nominating contest — when all was said and done, he lost resoundingly to a relatively weak “establishment” candidate in Joe Biden.
As his presidential aspirations collapsed in late February, it became painfully clear that Sanders had failed to make inroads with a sufficient number of non-socialist Democratic voters in order to secure the party’s nomination — or even retain the same coalition that propelled him to an expectations-exceeding performance in 2016 against Hillary Clinton.
Since he suspended his campaign last week and formally endorsed Biden on Monday, debates around the reasons for Sanders’ failure have tended to focus on a variety of possible strategic shortcomings: Should he have attacked Biden more aggressively? Should he have more assiduously courted the high-value endorsement of Rep. James Clyburn of South Carolina? Should he have ditched the slightly overdone “revolutionary” branding?
In a sense, however, these arguments miss the forest for the trees. Ultimately the Sanders 2020 campaign existed within the broader firmament of the modern-day “professional left” — a loosely interlocking but culturally homogenous network of advocacy organizations, nonprofit groups and media outlets — and its sentiments infused “Bernie World” with certain ill-advised priorities. Or, one might argue, pathologies.
Within this network are a growing consortium of activists, operatives and journalists who harbor a fundamental disdain not just for the current American government or various unseemly aspects of American political and cultural life, but for America per se. And for whom even contemplating something so simple as wearing a flag pin would’ve been an unthinkable capitulation to fascism, racism, predatory extractive capitalism, or some vague combination thereof.
Contemporary “progressives” are very often infatuated with symbolic gestures as it relates to matters of personal identity: race, gender, sexual orientation and numerous other increasingly inscrutable demographic categories. For instance, expressing one’s “pronouns” is frequently a socially mandated rite of passage for entry into respectable “movement” circles. (Although to his credit, one of the few triumphs of the Sanders campaign was that he successfully fended off demands to clarify his pronouns, unlike several other candidates who made a great show of doing so, such as fellow “progressive” Elizabeth Warren. It always seemed rather doubtful that anyone was confused about whether Bernie Sanders identifies as a male.)
But for all their intense devotion to these highly specialized, ritualistic displays of self-promoting symbolism, left-wing journalists and activists also manage to be reflexively allergic to symbolic displays of patriotism. Such displays need not take the form of crass jingoism, or any other fevered right-wing caricature. Rather, it could entail merely embracing “America” as a notion that unites citizens around a common national purpose.
For so many contemporary “progressives” — who, again, comprised the intellectual and organizing firmament for the Sanders campaign — the mere prospect of developing a “socialistic” rhetoric that also conveys love of country is utterly anathema.
Ironically, the previous iteration of the Sanders campaign had at least to some extent recognized the potency of this political formula. One of their most well-received productions from the 2016 cycle was the so-called “America” ad, which featured the classic Simon & Garfunkel song overlaying a montage of Sanders happily traversing his way through quintessential American landscapes.
Today, though — after four years of radicalization and polarization under Donald Trump — an increasingly obstinate “progressive left” seems perpetually aghast if one even dares to suggest that the American Flag or other generically patriotic symbols are not inherently fascistic. (I can personally attest to this.) It wasn't so much that Bernie himself changed, as the ferocity of the activist milieu that comprised his movement's orbit.
Consequently, the Sanders campaign circa 2020 gave the impression of being less animated by good old-fashioned Americana than the Sanders campaign circa 2016. This time around, Sanders instead placed his emphasis on participating in the obligatory “anti-Trump” sweepstakes, whereby the Democratic candidates all competed amongst themselves for who could rattle off the most sweepingly inflammatory Trump-related tirades.
In almost every stump speech, Sanders lambasted Trump as the most “dangerous president in American history” — a rather incongruous statement from a candidate who boasted of helping lead the opposition to the Iraq War, which had been launched by the previous Republican president. For all his faults, Trump has not yet initiated any full-scale preemptive ground invasions on false pretenses.
Given the tonal evolution of his campaign, it shouldn’t have been much of a surprise that Sanders’ rural support — a key component of his 2016 coalition, and a central reason why he remained competitive in contest after contest four years ago — cratered. Take, for instance, Isabella County, Michigan, where Sanders scored his highest margin of victory in the state against Hillary Clinton. Located in Michigan’s rural interior, Sanders won 66% of the vote there in 2016. In 2020, not only did he lose the county to Biden, his raw vote total declined by around 15% — even as voter turnout statewide increased by 32% compared to 2016.
Perhaps the voters who abandoned him in Isabella County would’ve been amenable to a more overtly pro-America message; one that preserved Sanders’ core policy prescriptions, which are broadly popular in the Democratic electorate, but also gave the impression of shared affinity for the country in which they live.

It’s not as though this was inconceivable: again, Sanders more-or-less did it in just four years ago. Notwithstanding his reputation as a fire-breathing leftist ideologue, he won self-described “moderate” and “conservative” voters by sizable margins in numerous states last cycle.

But the present composition of the activist left, with their weird preoccupations and alienating cultural attitudes, made replicating this feat all but impossible. The Sanders who won the 2016 West Virginia primary by 15% no longer existed.

Imagine if Sanders had worn a flag pin. With absolute certainty, it would’ve spawned an immediate, ferocious intra-left debate over whether he was shamefully pandering to violent nationalistic hatreds, and “erasing” the anxieties of those for whom the American flag evokes unspecified “traumas.” That is the stultifying political environment in which the Sanders campaign was inescapably mired, where even the most basic iconography of American civic life could be fraught with immense, hair-pulling controversy.