The Defenestration of Prague depicted by Johann Philipp Abelinus between 1635 and 1662. (Wikimedia Commons)
On May 23, 1618, a divine miracle took place in Prague. That, or three guys just caught a lucky—albeit stinky—break. What began as a political protest ended with the spark that triggered the Thirty Years' War, perhaps the only war in history to start with people getting thrown out a window. 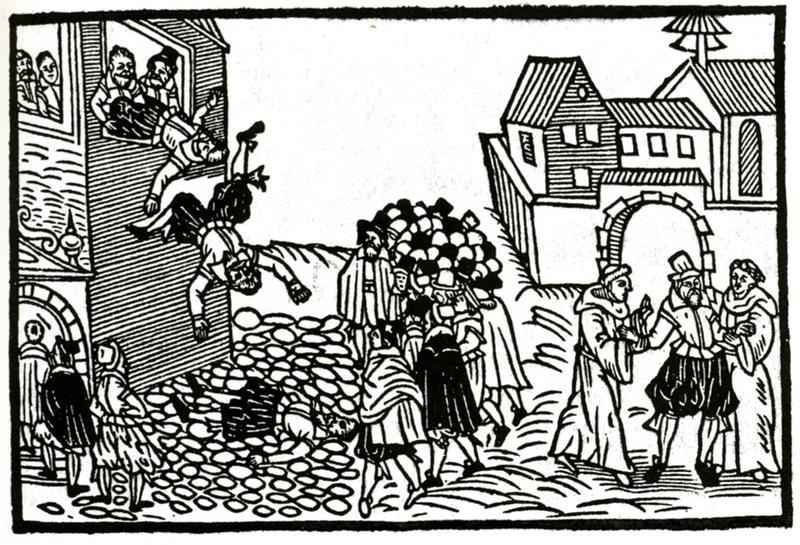 "Defenestration" literally means "the act of throwing someone out of a window." (crossroadshistoricalresearch.com)

"Defenestration" is probably not a word that is in your everyday vernacular. This term, translated from Latin, literally means the act of throwing something, most often a person, out of a window. It's an oddly specific word that, not surprisingly, entered the language right around 1618, conveniently in time to name the May 23 event. 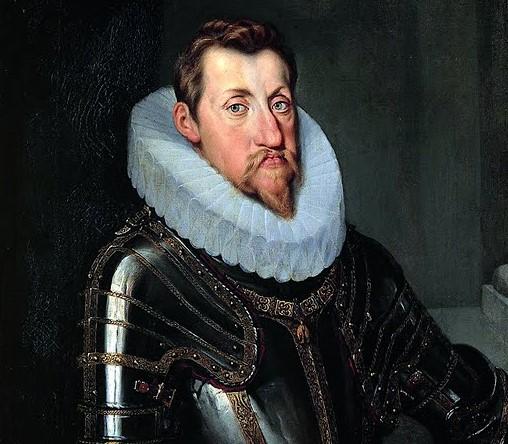 Just a year before, Archduke Ferdinand of Austria was appointed king of Bohemia, a wealthy province near Austria. Prior to this, every king of Bohemia answered to the Hapsburg kings and declined to enforce Catholicism on their subjects, accepting Protestant teachings and debates. In fact, officials signed the Letter of Majesty in 1608 to guarantee religious tolerance for the mix of Protestant and Catholic citizens of Bohemia. Ferdinand, however, was a staunch Catholic who felt it was his divine duty to unify the people into a Catholic empire. Although he pledged to honor the Letter of Majesty, he was likely just biding his time. 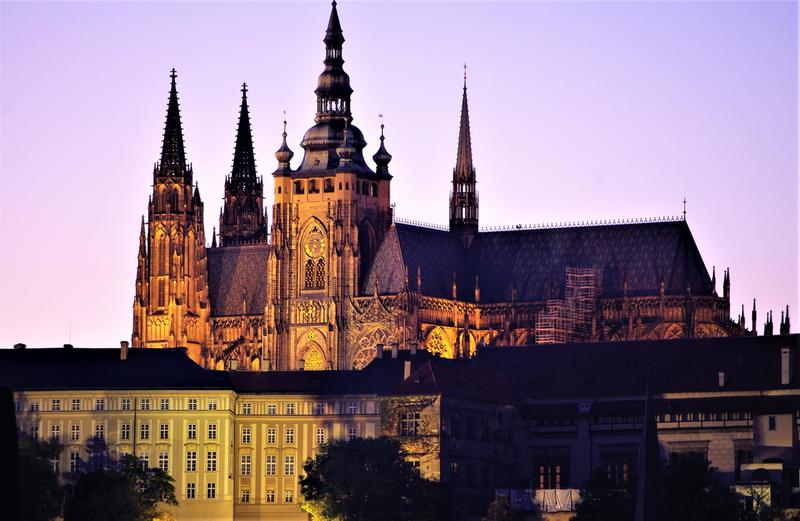 During this time, the Protestant Christian followers of Martin Luther, today called Lutherans, planned to build two new churches in Prague. According to the Letter of Majesty, they had every right to do this, but King Ferdinand was incensed. What's a freshly crowned monarch with a secret agenda to do? He couldn't forbid the building of the churches, but he could seize the land upon which they were to be built in the name of the crown. To rub salt into the Lutheran wound, he ordered the construction of Catholic churches on the lands he seized. 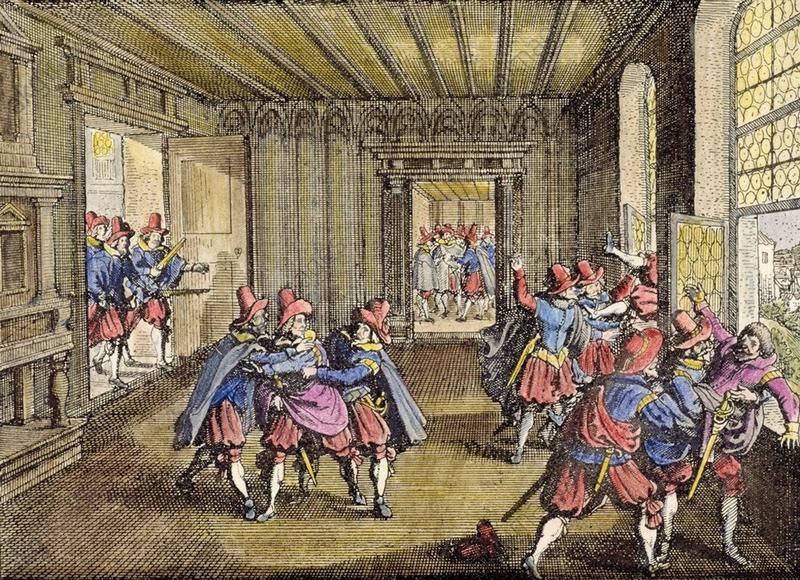 An artist rendering of the Defenestration of Prague. (reddit.com)

The Lutherans viewed King Ferdinand's stunt as an act of provocation and responded by staging a protest. The King sent his deputies to arrest the protesters, but that only incited more protests as Lutherans demanded the prisoners' release. When the King refused, word was sent to the people throughout Bohemia to converge on Prague on May 23 for a massive demonstration. 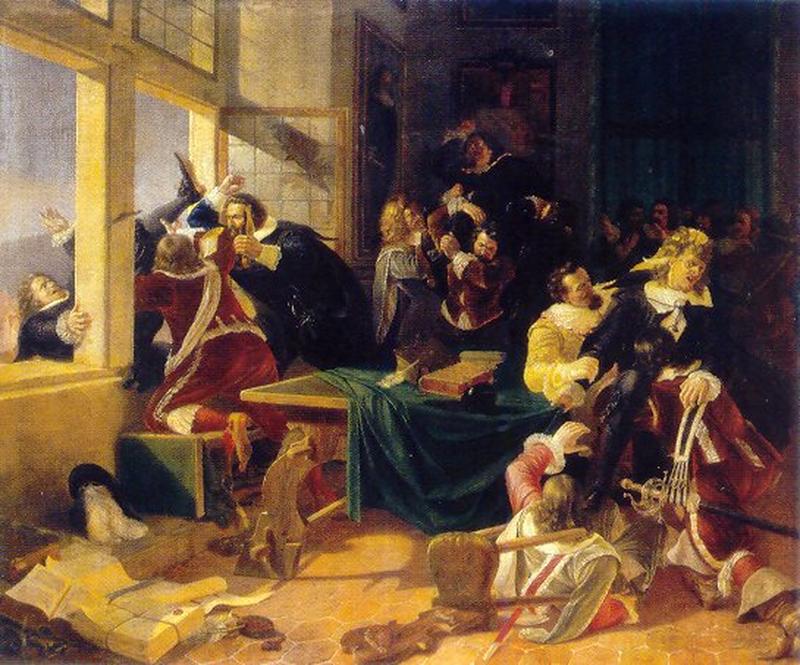 The Protestant dissenters tossed three men out a window. (origins.osu.edu)

A well-known and well-respected soldier, Count Jindrich Thurn, organized the demonstrators and led them to the Prague Castle, where they confronted some of King Ferdinand's imperial deputies and charged them with violating the Letter of Majesty. Two were quickly released, but the mob demanded justice for the two remaining deputies, County Jaroslav Martinitz and Count Villem Slavata. As the lords feverishly prayed to the Virgin Mary for help, the crowd of protesters unlatched the windows and tossed the two men, along with their helpless secretary, out onto the streets below. 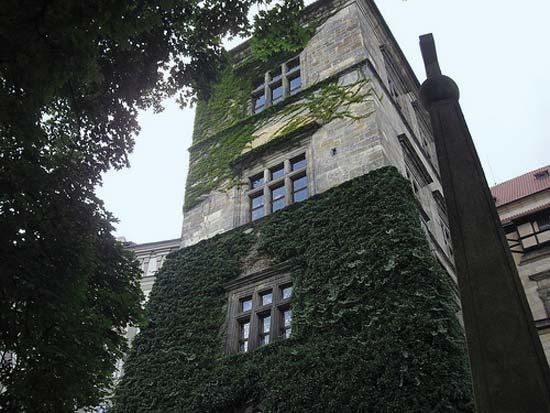 The 70-foot window from which the men were thrown. (britannica.com)


One Heck Of A Fall

Prague Castle is a tall and imposing structure, and the window from which the two deputies were thrown is 70 feet off the ground. Most people who fall from such a height die the moment they hit the ground, but protesters watched in amazement as Martinitz and the secretary jumped to their feet and fled, totally unharmed. Slavata was knocked unconscious by the fall, but he was quickly carried off by a group of servants and made a full recovery. 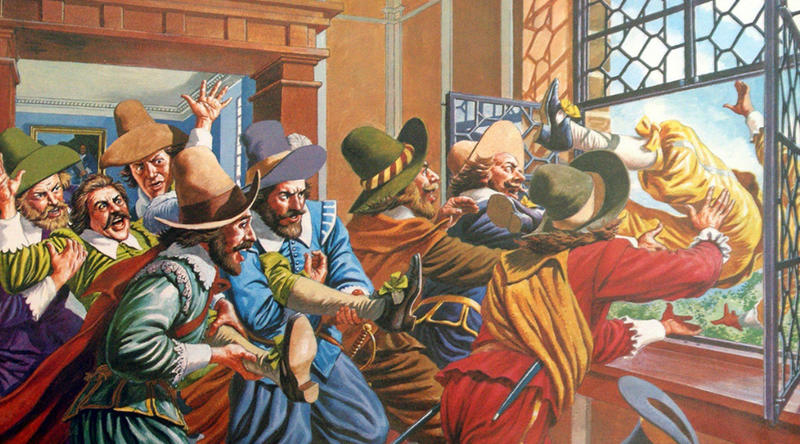 Did angels catch the falling men? Or was it poo? (anillustratedhistoryofslavicmisery.wordpress.com)

The Catholics claimed that the three men were saved from certain death because the Virgin Mary heard their pleas for help and sent three angels to catch them as they fell. (Perhaps Slavata's angel got held up.) This explanation only bolstered their belief that King Ferdinand was right to enforce his Catholic rule, but the Lutheran witnesses told a different story. They claimed the three men survived because they landed in a squishy pile of dung that cushioned their fall. 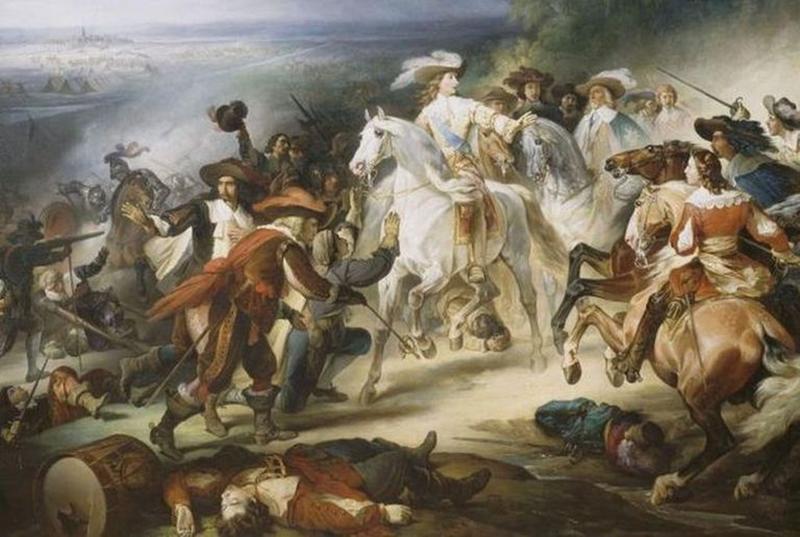 The Thirty Years' War broke out in the aftermath of the Defenestration of Prague. (thoughtco.com)


The Road To The Thirty Years' War

Following the Defenestration of Prague, both the Catholics and the Protestants began to build up their armies in preparation for war. After the Protestants deposed King Ferdinand and installed a Calvinist named Frederick V. Elector Palatine on the throne, Ferdinand's army engaged the Protestants in battle on November 8, 1620 in the first skirmish of the Thirty Years' War. The Catholics were victorious, but the event led to plundering in Prague and the subsequent capture and execution of a group of Prague's noble elites. Several were beheaded, and their heads were suspended on iron hooks over the city's Bridge Tower as a warning. After this, the Thirty Years' War began in earnest, resulting in the deaths of eight million people over—you guessed it—30 years.