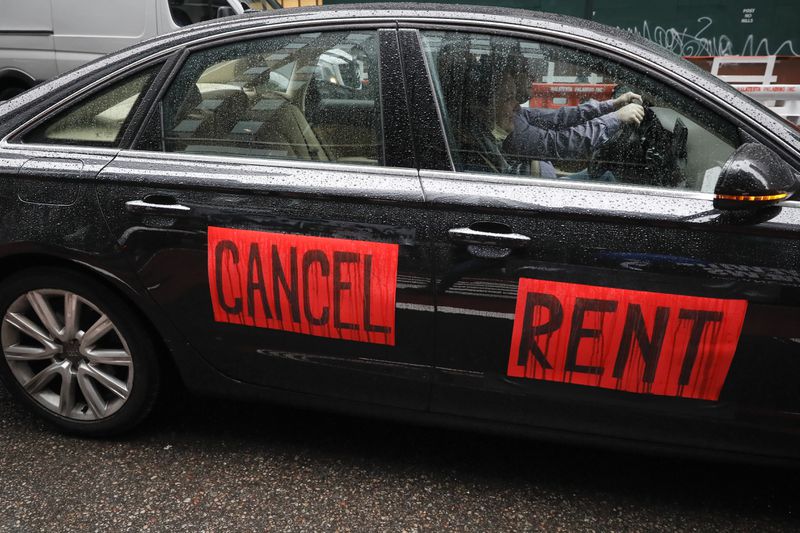 A sign is displayed on a vehicle as a caravan of protesters drive up Second Avenue in Manhattan on May 1.(John Minchillo/AP)


A group of city lawmakers are pushing for the next coronavirus stimulus package to bankroll a “universal” moratorium on rent and mortgage payments — an unprecedented proposal that carries a monthly price tag of at least $66 billion.
Reps. Alexandria Ocasio-Cortez (Queens, Bronx) and Grace Meng (Queens), who represent two of the nation’s worst-hit districts, are spearheading the effort and outlined it in a Tuesday letter to House and Senate leaders from both sides of the aisle.
Off the bat, rent and mortgage payments across the U.S. would be canceled “for the duration of the pandemic,” according to the letter, which was obtained exclusively by the Daily News and signed by a total of 10 Big Apple Democrats. Once the pandemic has been “declared ended,” the moratorium will remain in place for another six months, the letter says.
Landlords would be reimbursed for the costs of canceling rent through a program operated by the Department of Housing and Urban Development, according to the plan. Homeowners would be able to get their mortgage payments forgiven through the same program.
With millions of Americans out of work, the city politicians said not canceling rent could result in a “catastrophic” spike in homelessness.
Making the moratorium “universal,” regardless of income considerations, ensures that the flow of aid isn’t clogged by “bureaucratic measures," the pols added.
“For the working-class, immigrant or impoverished populations found in urban places this pandemic has proved disastrous,” the letter states. “As such, a national rent moratorium would ensure that these vulnerable communities remain housed.”
The letter, whose other signees include Reps. Jerrold Nadler (D-Manhattan), Nydia Velazquez (D-Brooklyn), Hakeem Jeffries (D-Brooklyn) and Carolyn Maloney (D-Manhattan), does not spell out a price tag for the proposed moratorium.
However, Lauren Hitt, a spokeswoman for Ocasio-Cortez, said the rent cancellation alone would cost about $66 billion per month.

Factoring in the proposed mortgage subsidies, the total cost of the proposed program would thereby all but certainly top half a trillion dollars.

Republicans are unlikely to support such a deal as Congress begins negotiations on the next coronavirus stimulus bill deal this week.

Senate Majority Leader Mitch McConnell (R-Ky.), one of the letter’s four addressees, recently even voiced skepticism about offering relief for state governments suffering massive budget shortfalls because of the pandemic.

Hitt said McConnell and other Republicans should show as much compassion for renters as they do for corporations.

“The federal government has already committed to spending up to $4 trillion to bail out corporations,” Hitt told The News, referring to the first stimulus measure signed into law in March. “In that context, spending $66 billion per month to bailout renters is more than appropriate.”
Posted by free heip at 06:06