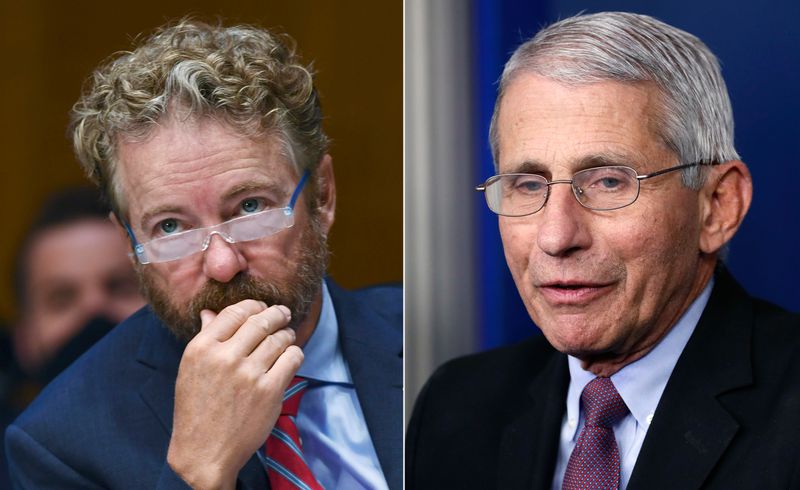 
Dr. Anthony Fauci told Rand Paul to tread lightly on Tuesday after the right-wing Kentucky senator suggested American schools should reopen this fall no matter what even though the nation will likely still be reeling from the coronavirus pandemic.
Speaking during a Senate Health Committee hearing, Paul used his allotted time to criticize Fauci’s decidedly cautious approach and noted that children generally don’t suffer symptoms from COVID-19.
“As much as I respect you, Dr. Fauci, I don’t think you’re the end-all,” Paul told Fauci, who appeared at the hearing via video-stream. “I don’t think you’re the one person who gets to make a decision. We can listen to your advice but there are people on the other side saying there is not going to be a surge … I think it’s a huge mistake not sending our kids back to school.”
Fauci, the nation’s top infectious disease expert and a senior member of the White House coronavirus task force, did not take kindly to Paul’s punditry.
“First of all Sen. Paul,” Fauci responded, “I never made myself out to be the end-all in this. I am a scientist and I give information based on scientific evidence."
Fauci informed Paul that doctors are finding that some children infected with COVID-19 are developing potentially deadly inflammatory symptoms synonymous with the Kawasaki disease and urged him against underestimating the dangers of the virus.
“We don’t know everything about this virus, and we really better be very careful, particularly when it comes to children,” Fauci said. “We’ve got to be careful that we are not cavalier in thinking that children are completely immune to the deleterious effects.”
Fauci wrapped up his answer by noting that he hopes American students will be able to return to school this fall, but that he won’t advocate for it if lives could be on the line as a result. “I’m very reserved in making broad predictions,” he said.
Earlier in the hearing, Fauci said it’s not feasible to believe that a coronavirus vaccine will be ready in time for the fall semester.

“That would be a bit of a bridge too far,” he said.

Rather, Fauci said schools and colleges may have to invest in broad testing efforts and rethink traditional classroom learning.

Over and over in his Tuesday testimony, Fauci broke with President Trump on what needs to be done to combat the pandemic and whether the U.S. economy is ready to reopen.

At one point, Fauci said the U.S. death toll is “almost certainly” higher than the official tally, which hovered around 81,000 as of Tuesday afternoon, since hospital systems in hard-hit cities like New York have a hard time keeping accurate counts.

Trump has suggested the opposite and even recently claimed Democrats may be inflating the death toll to make him look bad.