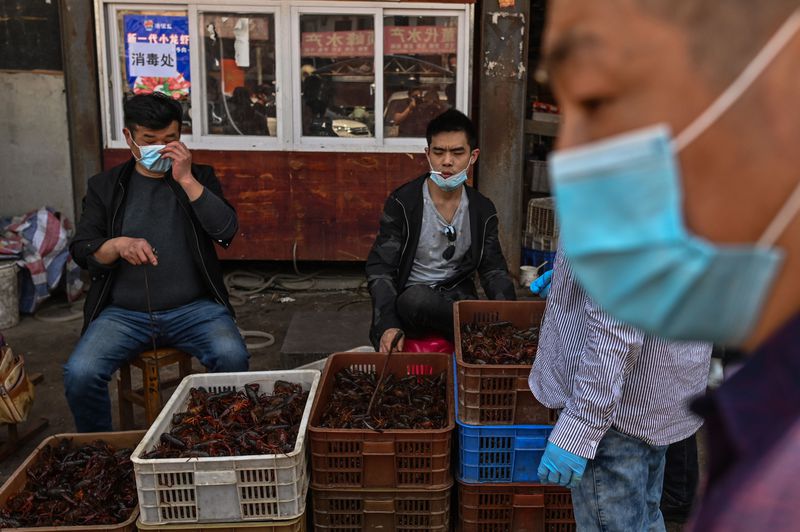 This photo taken on April 15, 2020 shows venders wearing face masks as the offer prawns for sale at the Wuhan Baishazhou Market in Wuhan in China's central Hubei province.(HECTOR RETAMAL/AFP via Getty Images)


The hunting and eating of wild animals has been banned in the Chinese city of Wuhan as part of the nation’s latest efforts to curb the transmission of zoonotic diseases amid the coronavirus pandemic.
In a government press release issued Wednesday, initially shared on the city website and then widely across Chinese social media outlet Weibo, officials detailed strict new prohibitions set to take effect immediately and last for the next five years.
According to a translation of the declaration, Wuhan will be a “wildlife sanctuary,” where government-sanctioned hunting will only be allowed for “scientific research, population regulation, monitoring of epidemic diseases and other special circumstances," CBS News reported.
The ban also comes with stringent new controls on the breeding of all wild animals, which emphasizes they cannot be reared as food. City officials said farmers in neighboring regions are also being offered cash incentives to stop breeding exotic livestock.
The move comes amid research suggesting wild animals traded in a Wuhan market is the most likely source of COVID-19. While the beginnings of coronavirus has proven controversial most researchers believe the fast-spreading disease likely originated in bats and was then transmitted to humans through an intermediary sold at a wet market in the Chinese city of 11 million, located in the Hubei province.
Before it was shuttered in January, merchants at Wuhan’s Huanan Seafood Wholesale Market sold and slaughtered beavers, porcupines, and baby crocodiles, according to National Geographic.
The majority of the members of the World Health Organization — 122 out of 194 — have called for an independent investigation on the origins of the outbreak, which officials in Beijing have repeatedly resisted. American politicians, including President Trump have suggested coronavirus actually originated in a Wuhan lab, where researchers had been analyzing virus strains at the time.
The Chinese government on Wednesday took aim at the U.S. over criticism of lax reporting in the early stages of the pandemic, marking the latest squabble between the country and the Trump administration.
“It is clear to see that the international community generally disagrees with the U.S. actions of distorting the facts, contradicting itself, blaming others and undermining international cooperation in fighting the pandemic,” Foreign Ministry spokesperson Zhao Lijian said.
Posted by free heip at 08:25