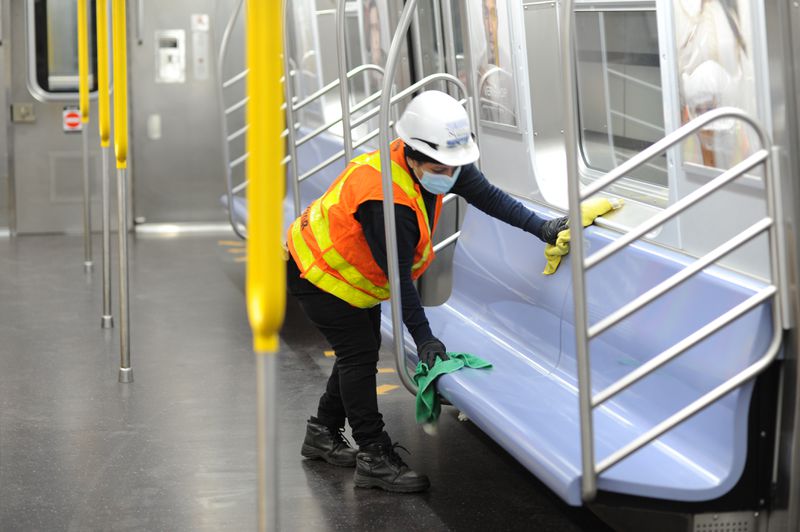 A full shutdown of the subway system proved to be hard to manage early Wednesday when the MTA made good on Gov. Cuomo’s order to close it for four hours each night — and many were left frustrated by the drastic decision.

The 1 a.m. to 5 a.m. closure forced more than 2,000 confused homeless people onto streets and buses — a move the governor on Tuesday said was necessary in order to disinfect the city’s vast transit network.

At 12:55 a.m., 20 sleepy straphangers staggered off a train at Brooklyn’s Flatbush Ave. - Brooklyn College station on the No. 2 line. A group of six cops told them to leave.

"They didn’t make any announcement on the train,” yelled Tyrone Batte, 35, who struggles with drug addiction and spends many of his nights on trains. “I need help. I’m not going to a shelter. I went five years ago. I got robbed. People tried to rape me three times. It’s like prison with fewer guards.”

Batte declined help from a group of six homeless outreach workers on the subway platform and joined eight of his fellow vagabonds upstairs aboard a B44 bus that soon became cluttered with passengers’ trash bags of belongings and a granny cart.

Private cleaners earning $18 an hour moved in to disinfect the cleared-out Flatbush Ave. station at that point.

But 30 minutes prior, half of the 12-person cleaning crew walked off the job because they were not provided with enough protective equipment.

“We were given one pair of gloves, and only a few of us got masks,” said one worker who asked not to be named because of her immigration status. “They said they would give us gowns. I brought my own masks. They gave me a safety vest but they made me give it back.”

The remaining cleaners were quickly given fresh overalls and masks after the walk out, and used spray bottles and mops to quickly wipe down trains at the station.

The disinfecting effort was a different story in Manhattan, on the northern end of the A line at 207th St. in Inwood, where workers used high-powered scrubbers and chemicals to clean the station’s floors.

More than a dozen homeless people were cleared off the upper Manhattan platform around 1:20 a.m. to make way for the cleaning.

Most disappeared into the night without boarding a bus or accepting help from outreach workers, but a few gave in and agreed to be transported to a shelter.

“They want to take me to a safer place,“ said Andrea Smith, 38, of the Bronx, who sat on a bench near the 207th St. station, all her worldly possessions packed into a shopping trolley. “I’m tired of taking my endless tour of the subway. I just want to find a place in a shelter. I need some rest.”

Many people who aren’t homeless were also blindsided by the shutdown.

Alan, 59, who asked his last name not be used, swiped through the turnstiles at Flatbush Ave. around 12:45 a.m.

Police told him to turn around.

“I work at Duane Reade in Manhattan, I live in Washington Heights, and I went to my girlfriend’s place to drop off some money,” he said. “What kind of crap is going on here in New York? I want to go home. I’m going to get robbed in Brooklyn. A bunch of knuckleheads live out here. And now these cops are kicking me out — they’re not going to help me.”

Alan went upstairs and tried to board a B103 bus to start his long trek home — but it was too full and he had to wait on the sidewalk for the next one.

Four hours later, several homeless people waited outside the Flatbush Ave. - Brooklyn College station waiting to get inside when they reopened at 5 a.m. and find some warmth.

A dozen cops prevented most people from jumping the turnstile.

“These cops are acting like d--ks. I’m cold,” a man wearing a sleeveless shirt told an MTA employee at the booth, pleading for a free ride.

“I haven’t slept in two weeks," said Destine, who has been homeless for six weeks after a life event forced him onto the streets. “I’m exhausted, I’m tired, my feet hurt, I’m hungry. I’ve been eating garbage for two days.”

Destine said he doesn’t worry about catching coronavirus. “I don’t care," he said. "I gave up.”

Four police officers removed a homeless man with five bags from a 2 train that was about to leave the station, telling him he needed a face covering. The man reached in one of his bags and took out a surgical mask but was still told to leave the station.

A flock of masked regular commuters rushed to the first 2 train leaving the station.

By 5:10 a.m, the station was in full swing, with an early rush of commuters, most of them essential workers, entering the freshly cleaned up trains. Some cheered the cleaning crew as they wiped and mopped down the train cars.

“Thank you very much! God bless you!” one woman told them.

“I feel much more comfortable now," said Marie Maisonneuve, 54, a senior care worker who takes the train six days a week to get to her job. “This is the way it’s supposed to be.”

"It’s much better,” said Bod Dunn, 65, who works as a teacher for students with special needs in Manhattan. “It makes a heck of difference.”

The situation with homelessness had worsened since the beginning of the pandemic, Dunn said.

“From one car to the other, it was just homeless,” Dunn said. “The homeless would just take off their clothes, give themselves a bath — in the car! It was just terrifying.”

At the Jamaica Center - Parsons/Archer commuters who usually leave earlier for work were frustrated trains weren’t departing at exactly 5 a.m.

Juana, 45, who declined to give her last name, works at a bagel shop in Downtown Brooklyn was running late for work due to the overnight closure. “I feel bad,” she said. “The boss is going to be there first, but it’s not him that has to be there.”

Trevor King, 49, who works for Allied Universal Security, a group that works in buildings all over the city, said he waited for a shuttle bus outside outside the station from about 2 a.m, until almost 5 a.m. and it never came.

“There was nowhere else to go," he said of his long wait. “They could do a disinfection without shutting it down I guess . . . Let’s see what happens. Maybe tomorrow will be better.”

Barry Hicks, 61, who is homeless and usually beds down at the bottom of a stairway in the Jamaica Center station was kicked out during the cleaning and slept on a bench outside instead. He said he has been homeless half his life, since his mother passed away.

Last week, some cops brought him to a shelter in Manhattan but Hicks soon returned to the station.

“They got the virus there, and I left," he said of the shelter. "There’s guys in there that got it and the staff. There was one guy that had the virus, he was in quarantine. They put him right back in there. They don’t care.”