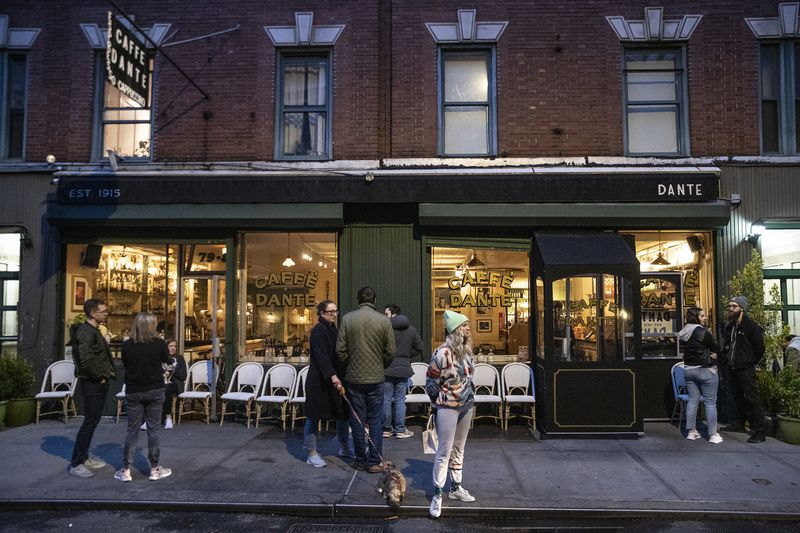 Patrons wait for their orders to go at Caffe Dante bar and restaurant in Manhattan on March 19.(Victor J. Blue/Getty Images)


Mayor de Blasio promised strict enforcement after throngs of New Yorkers were spotted carousing and quaffing cold ones on the Upper East Side Saturday night.
“I'm not comfortable at all with people congregating outside bars,” Hizzoner said at a Sunday press conference.
“If you start to form groups of people and then, you know, two, three, five and then it becomes six, it becomes 10, it becomes 15 — that violates what we're saying about social distancing,” he continued.
The NYPD was unable to provide stats about any arrests or fines given out during the revelry, which was caught on social media and in news reports.
Images showed people buying drinks, forming crowds and blatantly disregarding social-distancing rules — the same guidelines that led to a string of controversial, violent arrests in communities of color.
Faced with widespread outrage over those tactics, de Blasio on Friday said police would stop giving tickets to people who don’t wear face masks in public unless there was a “serious danger.”

But he promised Sunday the NYPD would enforce social-distancing rules on the affluent Upper East Side and elsewhere.

“We had a particular problem there,” Hizzoner said. “We're not going to tolerate people starting to congregate.”

At least one UES restaurant served customers on premises, a blatant violation of March’s statewide emergency order, according to NBC New York.

“If we have to shut places down, we will if they’re starting to violate these rules,” de Blasio said.