Cuomo unloads on Trump’s opposition to ‘blue state’ bailouts: ‘You’re going to defeat us all’ 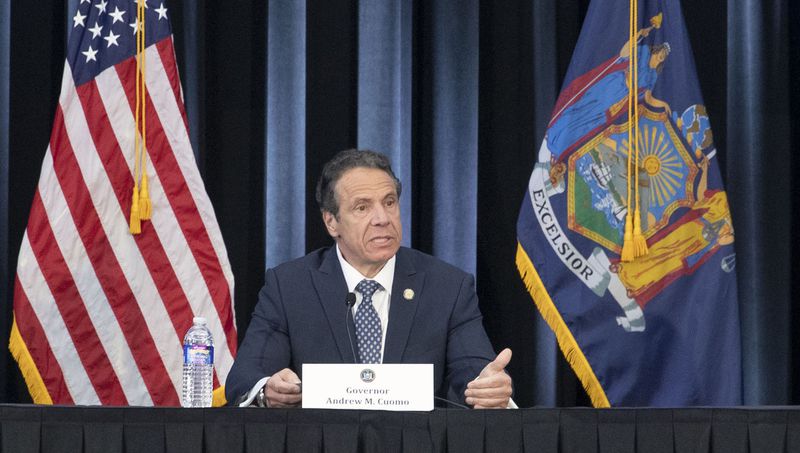 Gov. Cuomo at his coronavirus briefing.(Mike Groll/Office of Governor An)


Gov. Cuomo took sharp aim at President Trump on Tuesday over his newfound opposition to coronavirus bailouts for Democratic-led states like New York, warning that “all of us” will suffer if fiscal relief doesn’t come soon.
Cuomo, who predicts New York governments could suffer budget shortfalls topping $13 billion because of the virus, said Trump’s own plan for reopening the economy won’t work without bailouts for hard-hit states, since the cash is needed to fund essential services through the pandemic.
“It’s the state and local governments that fund police, fire, education, healthcare workers ... If you starve the states, how do you expect the states to be able to fund this entire reopening plan?” Cuomo said during his daily COVID-19 briefing from Albany.
Cuomo also hit Trump and his Republican allies in Congress with some hard tax statistics.
With a slideshow behind him displaying dollar figures, Cuomo pointed out that blue states like New York and New Jersey contribute far more cash to federal government coffers than they take out — contrary to GOP-led states like Kentucky, which do the opposite.
“What are you talking about fairness?” Cuomo fumed. “You want to be fair, just give New York back the money you took ... We know those facts and we know those numbers.”
The governor expressed dismay at the fact that Trump is resorting to political red meat tactics in the middle of a pandemic that has already killed more than 70,000 Americans, including some 25,000 New Yorkers.

“This whole discussion is counterproductive and it will lead to defeat for all of us,” Cuomo said. "You are going to defeat us all."

Cuomo’s pushback came one day after Trump claimed it wouldn’t be fair to Republican-led states to bail out Democratic-led ones, echoing comments made by Senate Majority Leader Mitch McConnell (R-Ky.).

Trump’s embrace of McConnell’s partisan pandering marked a flipflop compared to his saying on April 21 that he wanted Congress to get to work on a stimulus package including "fiscal relief to State/Local Governments for lost revenues from COVID 19.”

Cuomo wasn’t alone in unloading on Trump in light of his 180 on bailouts.

“This kind of divisive, tone-deaf and disingenuous nonsense from the president and Republican leaders is an insult to all those on the frontlines and the memories of those we lost,” Rep. Max Rose (D-N.Y.) said in a statement. "Let’s do our jobs, stop the games and save lives.”
Posted by free heip at 11:53