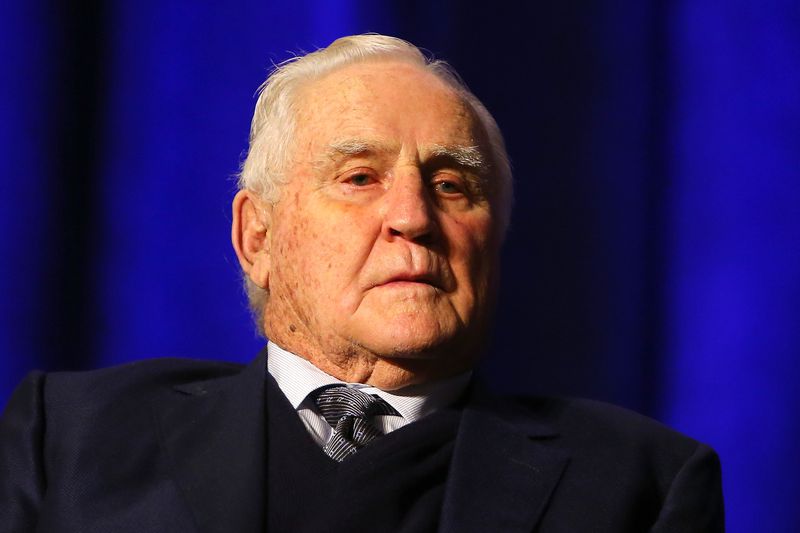 
Don Shula, the NFL icon who led the Miami Dolphins to two Super Bowl titles and won more games than any other head coach in league history, has died.
He was 90.
Shula died Monday morning at his home, the Dolphins announced. An official cause of death has not been revealed.
“Don Shula was the patriarch of the Miami Dolphins for 50 years," the team said. “He brought the winning edge to our franchise and put the Dolphins and the city of Miami in the national sports scene. Our deepest thoughts and prayers go out to Mary Anne along with his children, Dave, Donna, Sharon, Anne and Mike.”
Shula was the head coach of the Dolphins from 1970 to 1995. The first of his two championships with Miami came at the end of the 1972 season, in which the Dolphins became the first team to finish off an undefeated regular season with a Super Bowl title. They remain the only team in NFL history to accomplish that feat.
The second of Shula’s championships with Miami came the following season, making the Dolphins the first AFC team win back-to-back Super Bowls.
Hall of Fame quarterback Dan Marino spent the bulk of his NFL career, which spanned from 1983 to 1999, under Shula.
Shula had a .659 winning percentage over his 26 seasons with Miami, and made five trips to the Super Bowl with the team overall.
Before his illustrious tenure in Miami, Shula was head coach of the Baltimore Colts from 1963 to 1969. He won the 1968 NFL championship with Baltimore, but lost in Super Bowl III to Joe Namath and the Jets.
He only suffered two losing seasons during his 33 years as a head coach.
Shula won 328 regular season games, 10 more than George Halas, who stands in second place on the all-time list.
Bill Belichick, the active leader with 273 victories, is third all time.
Shula, who also won 19 playoff games as a head coach, was a four-time NFL Coach of the Year. He was inducted into the Dolphins’ honor roll in 1996, and into the Pro Football Hall of Fame in 1997.
In addition to his coaching achievements, Shula played defensive back for the Cleveland Browns, Colts and Washington Redskins during the 1950s. He played in college at John Carroll University.

Shula had five children from his first marriage to Dorothy Bartish, who died in 1991. He married his second wife, Mary Anne Stephens, in 1993.

His eldest son, Dave, was head coach of the Cincinnati Bengals from 1992-96 and currently coaches wide receivers at Dartmouth College.

Shula’s youngest son, Mike, was head coach at the University of Alabama from 2003-06 and has held various NFL coaching gigs, including being the Giants offensive coordinator during 2018-19 seasons. He currently serves as the quarterbacks coach of the Denver Broncos.
Posted by free heip at 09:47