Explain, now: De Blasio, Cuomo and the science of reopening 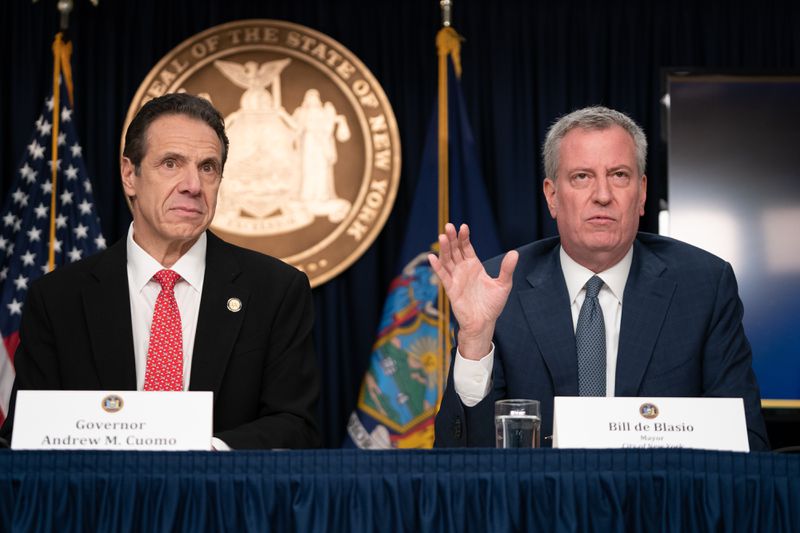 
All 8.6 million of New York City’s weary residents — or at least those who haven’t been lucky enough to decamp to vacation homes — are waiting, breath bated, to find out when we can ever so slightly relax the strict lockdown we’ve observed the past two-and-a-half months, to begin to reinvigorate our economy while taking care not to reignite the spread of the coronavirus.
Both Gov. Cuomo and Mayor de Blasio say hard data on disease trends and readiness, not their guts, will decide when the trigger gets pulled. Unfortunately, the two men are presenting competing data sets to the public, painting a confusing picture of New York’s progress beating back the coronavirus.
By any honest measure, the state and city are out of the darkest woods.
Every day, Cuomo releases data on seven metrics, showing three-day rolling averages in infection, hospitalization, death and testing rates in every region. That data registers consistent declines in the city. We’ve met four of seven benchmarks and are tantalizingly close to meeting two more. The seventh measure, hiring 2,500 contact tracers, will supposedly be met by early June.

Meanwhile, de Blasio daily delivers updates on three different indicators — hospitalizations, ICU beds occupied in public hospitals, and percent-positive tests — measures he says must “go down in unison, all in the right direction together for 10 days to 14 days.” And de Blasio doesn’t do three-day averages as the state does, which makes statistically insignificant day-to-day fluctuations in any city measure look like a major setback for reopening.

If science is guiding reopening, use the same science. And don’t let the tyranny of strict formulas — being one or two percentage points away from an arbitrary, preset threshold — dictate something this important.

Speak with one voice, mayor and governor. Explain in clear, plain language that we can all understand: Exactly what are we waiting for?