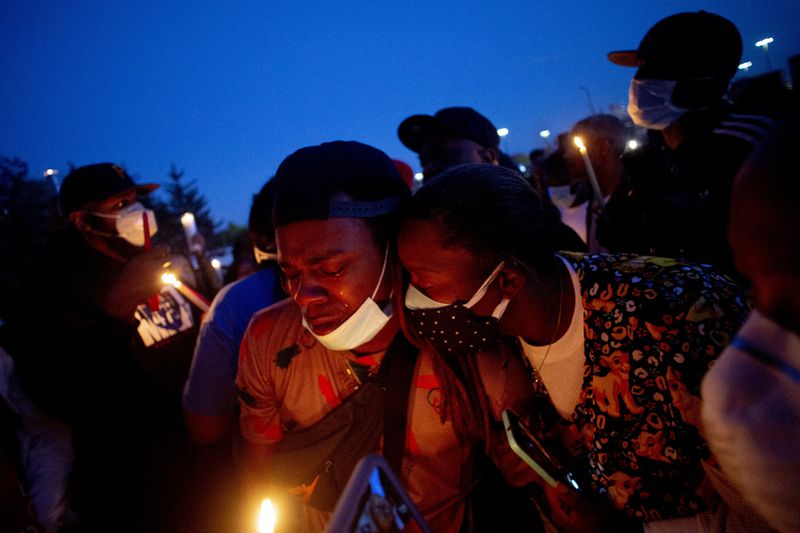 Maalik Mitchell, center left, sheds tears as he says goodbye to his father, Calvin Munerlyn, during a vigil Sunday, May 3, 2020, in Flint, Mich. Munerlyn was shot and killed Friday at a Family Dollar store in Flint. He'd worked at the store as a security guard for a little more than one year.(Jake May | MLive.com/AP)


A Family Dollar security guard who confronted a Michigan shopper for not wearing a mask inside the store was met with spitting, shouting and a fatal gunshot to the head, authorities said Monday.
Friday’s senseless killing in downtown Flint has led to murder charges against the deranged customer, but police are still on the hunt for her adult son, who’s accused of firing the fatal shot, as well as her husband.
Calvin Munerlyn, 43, got into a verbal argument with Sharmel Teague after asking her to cover her face to reduce the risk of coronavirus transmission inside the store, prosecutors said in a news release.
Teague responded by yelling and spitting at the victim, who then kicked the 45-year-old woman out of the store and instructed a cashier not to serve her, according to the release.
Police said the suspect left the store, but her husband and son showed up moments later and confronted Munerlyn. It was the son, 23-year-old Ramonyea Bishop, who then pulled out a gun and shot the security guard in the back of the head, authorities said.
Munerlyn was taken to the hospital, but he was pronounced dead a short time later.
“The death of Calvin Munerlyn is senseless and tragic and those responsible will be held accountable to the fullest extent under the law," said Genesee County Prosecutor David Leyton.
“From all indications, Mr. Munerlyn was simply doing his job in upholding the Governor's Executive Order related to the COVID-19 pandemic for the safety of store employees and customers,” Leyton wrote. “It is important that the Governor's order be respected and adhered to and for someone to lose their life over it is beyond comprehension."
A candlelight vigil held Sunday night for Munerlyn drew about 150 people, including his mother, Bernadett Munerlyn.

“He always liked to stay on the go all the time, so I called him Duper, super duper,” she told local news outlet MLive.com.

Her only son worked at Family Dollar for just over a year, but he had been in the profession for about three decades, she said.

Teague was in custody Monday on charges of first-degree premeditated murder and felony firearm possession.

Both Bishop and his stepfather, 44-year-old Larry Teague, are expected to be charged with first-degree premeditated murder and felony firearm possession as well as several other offenses.

Police urged anyone who knows where to find the pair to call 911 immediately. Leyton also warned that anyone found to be assisting the suspects in hiding from cops may be charged with a crime as well.
Posted by free heip at 12:28