The US Food and Drug Administration (FDA) has issued the first emergency use authorization for a coronavirus test use the gene-editing tool CRISPR.

The team, which include scientists from several institutions, says the test can detect if a patient has coronavirus in about an hour.

It works by using a molecule to search for the virus's genes in a sample. If it finds the virus, the molecule is activated and it releases a detectable signal that 'glows'.

Despite only being authorized for emergency use, this is the first time the FDA is allowing a CRISPR tool to be used in patients. 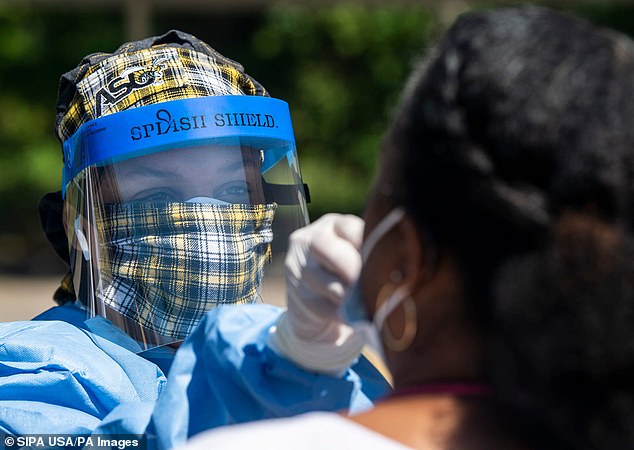 The FDA issued emergency use authorization for a retooling of the CRISPR gene-editing technology a coronavirus test. Pictured: Nurse Latasha Ivey administers a nasal test at a coronavirus testing center on the Alabama State University campus in Montgomery, May 6 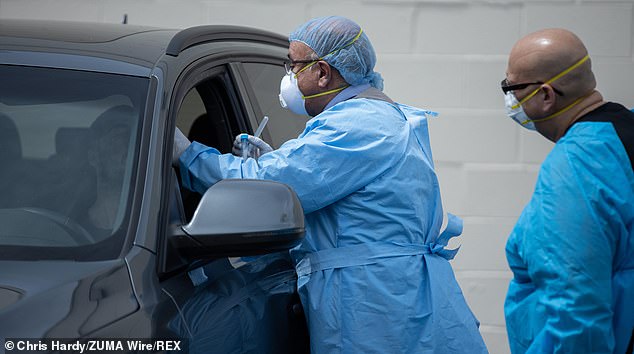 It uses a molecule that can find viral RNA instead of human DNA, in nose and throat samples, and glows when it's been found. Pictured: Dr Jose Gilberto Montoya taking nasal swab samples as part of his study to develop an antibody coronavirus test in Palo Alto, California, April 29 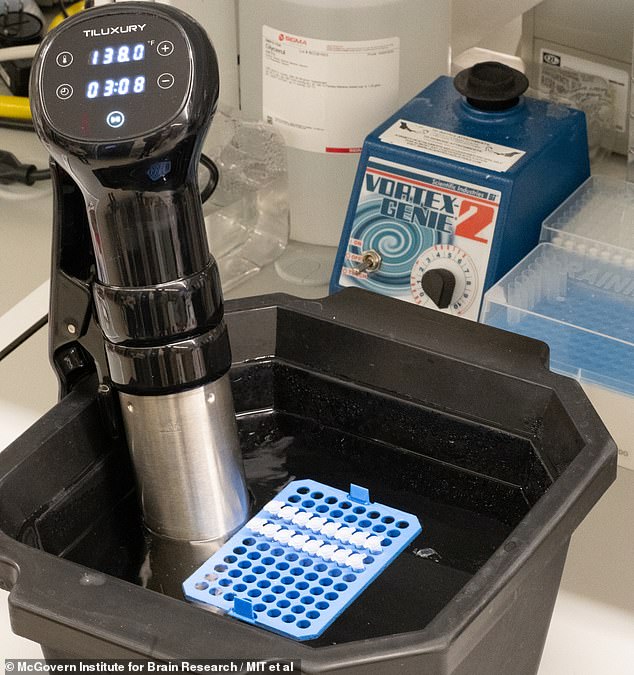 CRISPR has drawn excitement for its potential to correct genetic diseases, as well as alarm, after a Chinese scientists revealed last year that he had gene-edited a pair of twins in the womb.

The technology is comprised of remarkable capabilities: it can find particular genes along a strand of DNA, then snip out the faulty piece and finally replace it with a corrected version of the gene.

One of the leaders of the research team, Dr Feng Zhang is a molecular biologist who is a co-inventor of the gene-editing technology.

'CRISPR is ready and has come of age,' Rahul Dhanda, Sherlock's president and CEO, told Forbes.

'Not only are we validating and first to prove Crispr's capabilities of any therapeutic or diagnostic company, but it's also addressing one of the greatest healthcare issues to emerge in our lifetime.'

Dhanda said the company has been focusing on the technology to treat chronic and infectious diseases, but switched the entire company's focus to coronavirus as the pandemic grew.

'I told everyone who worked for Sherlock that we are going to be a COVID-19 company until we have a solution that can make a difference,' he told Forbes.

The first step of Sherlock's test requires a health professional taking a nasal or throat swab sample from a patient.

Then researchers make several copies of the sample's genetic material and keep it at a specific temperature.

Next. a CRISPR molecule called Cas13, is added to the copies.

If the molecule finds any RNA sequences, it breaks them off into little pieces that glow due to a fluorescent indicator. 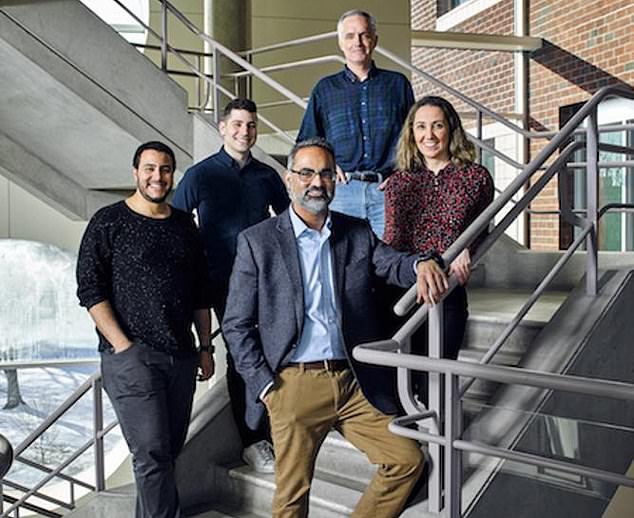 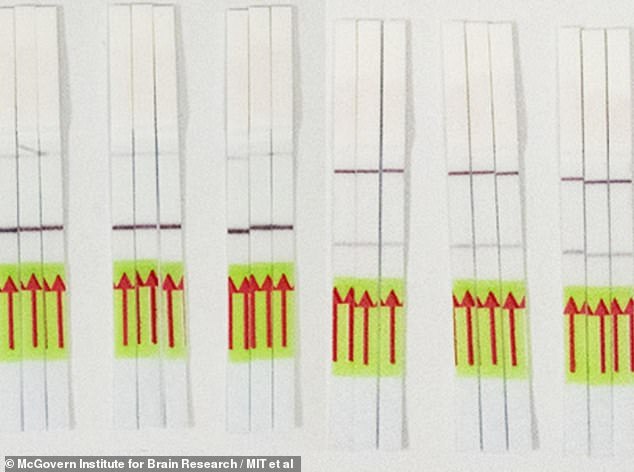 The team is also working on another test using CRISPR but that would offer a way to screen for the virus at home without sending a sample to a lab. It displays negative (left) or positive (right) results on paper strips similar to a pregnancy test

In the nearly 2,000 tests Sherlock ran before the FDA issued authorization, the technology positively identified the virus 100 percent of the time.

That means there wee no false negatives.

Sherlock says it is working with a partner to scale up production and will reveal plans to distribute its kits in the next few weeks.

The team is also working on another test using CRISPR but that would offer a way to screen for the virus at home without sending a sample to a lab.

All of the agents that react to the sample can do so in one test tube, then a paper dipstick shows the results, similar to how a pregnancy test displays results.

In theory, a person could put their own sample in a tube, where it would mix with the CRISPR enzyme and reagent, react, and turn either the positive or negative stripe on the paper strip darker. 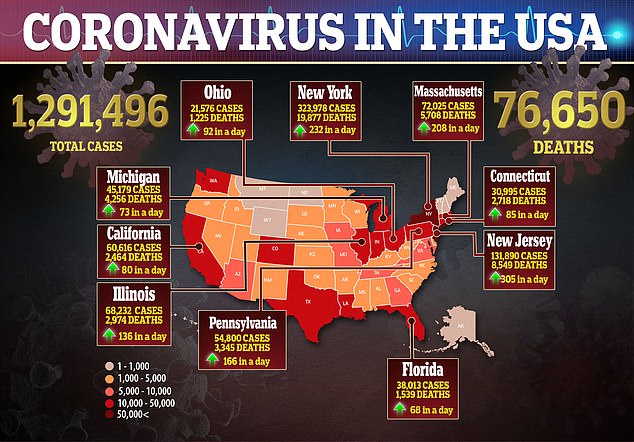 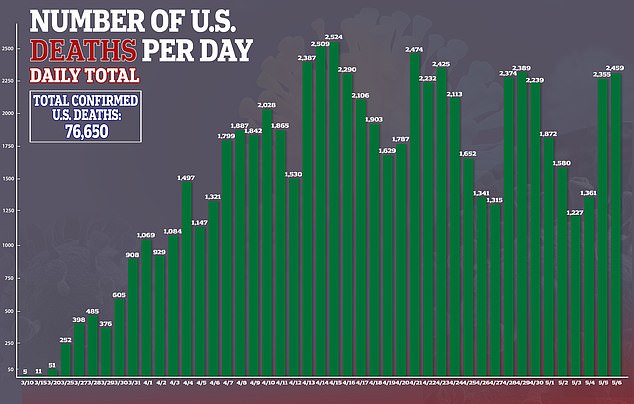 In early tests, it reacts with saliva also, which would make the test even easier to perform in the comfort of home without risking exposure.

In lab experiments, the CRISPR test proved 97 percent sensitive - meaning it only failed to identify coronavirus in samples where the virus was present - and 100 percent specific, meaning it never mistakes something else for coronavirus.

That puts it on par with the other available diagnostics for coronavirus.

'The ability to test for COVID-19 at home, or even in pharmacies or places of employment, could be a game-changer for getting people safely back to work and into their communities,' Dr Feng Zhang told STAT News.

'Creating a point-of-care tool is a critically important goal to allow timely decisions for protecting patients and those around them.' 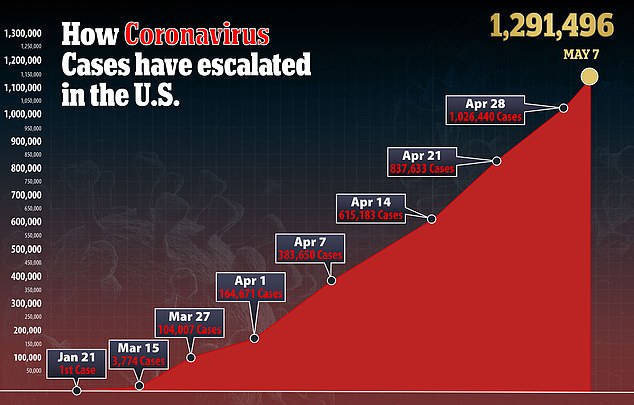