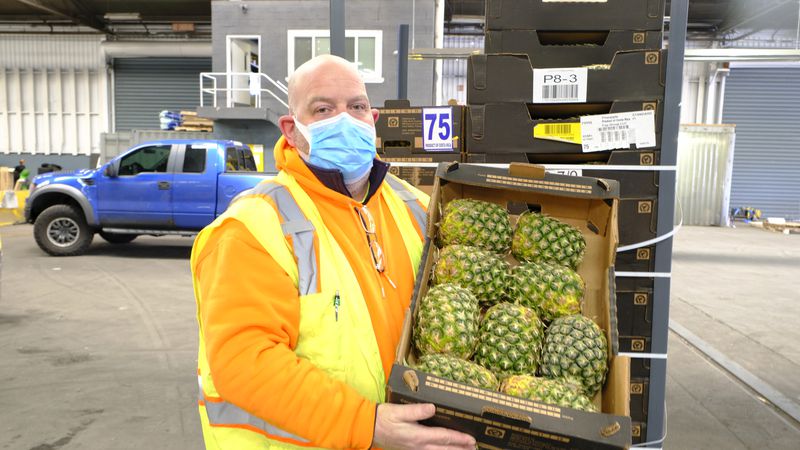 Carey Goldberg, warehouse foreman, shows a case of imported pineapples to be donated to residents of the Wyckoff Gardens Houses.

When a load of fresh pineapples was in danger of going bad at a Brooklyn port, supervisors saw a ripe opportunity to do good.

Mike Stamatis, CEO of Red Hook Container Terminal, and Joe Holland, head of warehouse operations, last month teamed up with community leaders from Fifth Avenue Committee and found a way to donate tens of thousands of pieces of fruit to local families grappling with the economic fallout of the coronavirus pandemic.

“Pineapples literally help with viruses and stuff like that because they actually attack mucus, they help with joint pain, and so I just thought it was a piece of sunshine in a dark time,” said Karen Blondell, one of the effort’s key organizers, who helped funnel the produce to the New York City Housing Authority’s Wyckoff Gardens complex.

“To be able to put a smile on people’s faces, it just shows you how impactful this kind of contribution is to these communities,” she said on a recent morning as she handed out hundreds of bags of fruit to grateful residents.

The initiative has now ramped up to include apples, oranges, bananas and more — all bound for city supermarkets, but stranded at the port due to slowed-down stocking chains.

“In the beginning, people I know in the grocery business were saying that fresh fruits were not selling because everybody was worried about touching it, that the disease lived on the fruit," said Holland. "This container of pineapples was sitting here, so we said let’s push it out there. That’s how it started, with the first container.”

The Food and Drug Administration has since stated that the virus is unlikely to be spread through fresh produce, but Blondell says she still reminds residents to take safety precautions, just in case.

“I tell them to wash all the fruit before they use it,” she said.

For vulnerable members of the community who may be struggling to put food on the table right now, a steady stream of free, healthy staples has been a crucial lifeline, and some of the Red Hook organizers feel that public housing residents were initially overlooked as aid was distributed across the city.

“When the pandemic first happened, we heard crickets — nothing from nobody,” said Monica Underwood, the head of a nonprofit called Families United for Racial and Economic Equality. “So we stepped up our game to make sure that our residents got everything they deserved.”

Besides the Wyckoff Gardens Houses, the produce is going out to grateful people in a variety of ways. Around the corner from the NYCHA complex, local pharmacist Ravi Chopra was picking up free cucumbers and tomatoes to supplement lunch for his staff from a curbside distribution location set up by Assemblyman Felix Ortiz.

“It does help, because if you go to the grocery stores nowadays, there’s nothing there,” Chopra said.

Stamatis and Holland have also put out pallets of fruit just beyond the port’s main gates, inviting community members to drop by and take what they need.

The effort has become more of a full-time job than either of the men anticipated, but they say it’s well worth it.

“We felt like it would be a great way to give back to the community that’s really been there for us,” said Stamatis, who noted that the donated crops are all in their prime — not supermarket rejects that would be dumped or turned into fertilizer anyway. “I expect to continue to receive stuff for as long as possible.”

“It’s so rewarding to get all the texts and see the smiles,” said Holland of the feedback. “It’s just a pineapple, but we don’t realize it. These people have no food, no money.”