‘How much is a human life worth?’: Cuomo pleads for debate on reopening America as coronavirus model doubles deaths 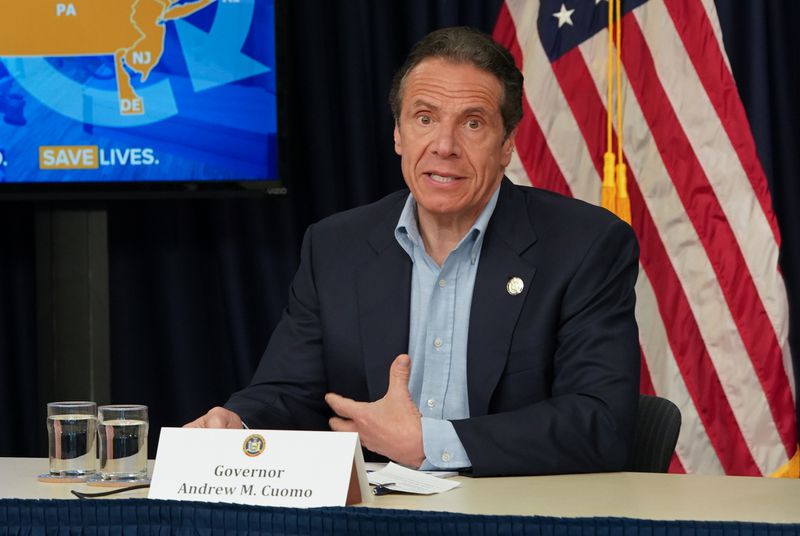 
Reopen America and watch more people die.
Gov. Cuomo made an emotional plea for America to debate the rush to reopen states as the daily New York state coronavirus death toll stayed steady at 230.
Pointing to a shocking new model that projects a doubling of the death toll, Cuomo said the country needs to have an urgent conversation about the human costs of rushing to reopen during the still-raging pandemic.
“The faster we open, the higher the human cost,” he said.
“That’s the hard truth we are all dealing with. Let’s be honest and be open about it," Cuomo said. “The question comes back to: ‘How much is a human life worth?’”
Cuomo bluntly said the country needs to be clear-eyed about the costs of reopening the economy even as he conceded there are also high costs to staying closed.
He cited the influential model created by scientists at the University of Washington that relaxing social-distancing rules — as most of the states are now carrying out — will lead directly to much higher infection and death rates.
“That’s a very nice way of saying, when you accelerate the reopening ... the more people get infected, the more people die,” he said.
The grim new model, which Trump and his task force cited when it predicted a lower death toll, predicts an explosion of new cases by the end of May to about 200,000 a day from about 25,000 today. Death rates will go up to about 3,000 a day, pushing the toll past 100,000 before summer officially starts, the data says.
The governor insisted that New York’s intricate system for reopening regions of the state builds in statistical measures that will serve as circuit breakers if the death and infection rates rebound.
He called for a “modulated” gradual reopening, which will then be reversed if needed, even if it means re-shutting down the economy and causing more economic pain.

“It’s not ideal, but it’s better than seeing the numbers go through the roof,” he said.

Cuomo announced that 230 New Yorkers died of coronavirus in the last day, a tick up from the day before but still lower than before. The hospitalization rate continues to drop at a relatively fast rate, a scenario that represents hope that the pandemic’s grip on the state is easing.

Still, the state announced it has added 1,700 previously undisclosed deaths at nursing homes and adult care facilities. That raises the death toll within those institutions to nearly 5,000.

“We want to confirm those things as much as we can," Cuomo adviser Jim Malatras said. “Now we’re putting up those tallies so people can see.”