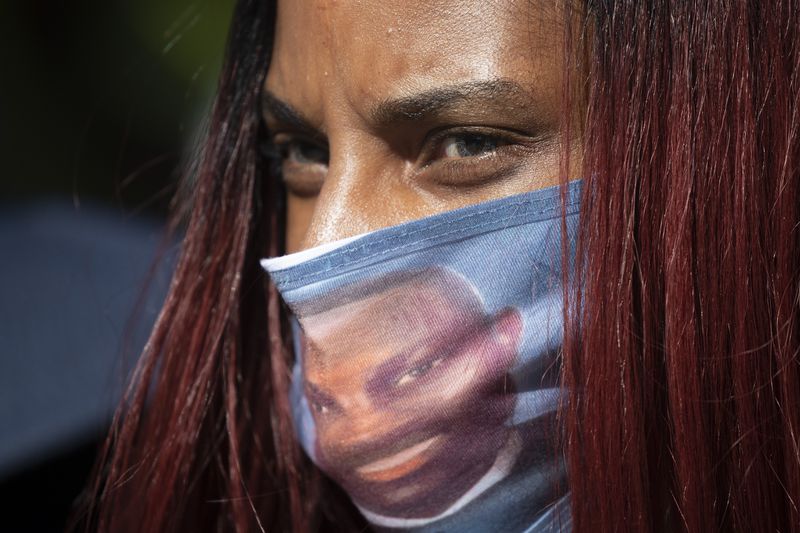 A woman wears a face covering with the likeness of shooting victim Ahmaud Arbery printed on it during a rally to protest Arbery's killing Friday.(John Bazemore/AP)

A day after a father and son were charged in the February killing of unarmed jogger Ahmaud Arbery, a Georgia official promised a thorough probe into the case and said the man who filmed the horrific incident is also under investigation.

In a news conference Friday morning, Georgia Bureau of Investigation Director Vic Reynolds said “every stone will be turned over" and if the facts lead agents to make another arrest “they will do that.”

The man who recorded the shooting lives near the 64-year-old suspect, ex-cop Gregory McMichael, and his son, Travis, and was driving behind them during the Feb. 23 incident.

The graphic footage, which prompted widespread outrage after it surfaced online this week, shows the black victim running on a seemingly quiet road outside Brunswick when the white shooters start chasing him in a pickup truck.

Travis McMichael, 34, then jumps in front of Arbery with a rifle and a scuffle ensues before three gunshots are heard, the video shows. The jogger, who would have turned 26 on Friday, died at a hospital later that day but no charges were filed by any local law enforcement agency.

Reynold’s agency took over the case Tuesday night, shortly after the video surfaced, and the two shooters were arrested on murder charges less than 48 hours later.

“We’re investigating everybody involved in the case, including the individual who shot the video,” Reynolds told reporters Friday without specifying what kind of crime the neighbor may have committed.

The two suspects previously told police they were following Arbery because they thought he was a suspect in a series of break-ins in the area.

A man thought to be Gregory McMichael called 911 seconds before the shooting to report “a black male running down the street,” audio recordings show. But the caller never told dispatchers what kind of crime he thought Arbery had committed and the victim’s family said the young man was known to the area and would sometimes wave to his neighbors.

Critics say the killing is another example of racial profiling that resembles the Trayvon Martin case.

“We’re literally hunted EVERYDAY/EVERYTIME we step foot outside the comfort of our homes!” basketball star LeBron James tweeted on Wednesday. “Can’t even go for a damn jog man! … ARE YOU KIDDING ME!!!!! I’m sorry Ahmaud (Rest In Paradise) and my prayers and blessings sent to the heavens above to your family!!”

Reynolds noted, however, that Georgia is one of the few states that don’t have a hate crime law, so he’s unable to pursue such charges.

He also acknowledged that time is an obstacle in investigating a shooting that happened over two months ago, but he refrained from criticizing police and prosecutors for not charging the McMichaels sooner.

“In a perfect world, would we have preferred to have been asked to become involved in February? Of course,” Reynolds said. “But sometimes, it isn’t a perfect world, so we have to deal with the situation as it’s placed in front of us.”

As for the video, which prosecutors hadn’t even acknowledged having, Reynolds said it was an "important” but not the only piece of evidence his team reviewed before filing charges.