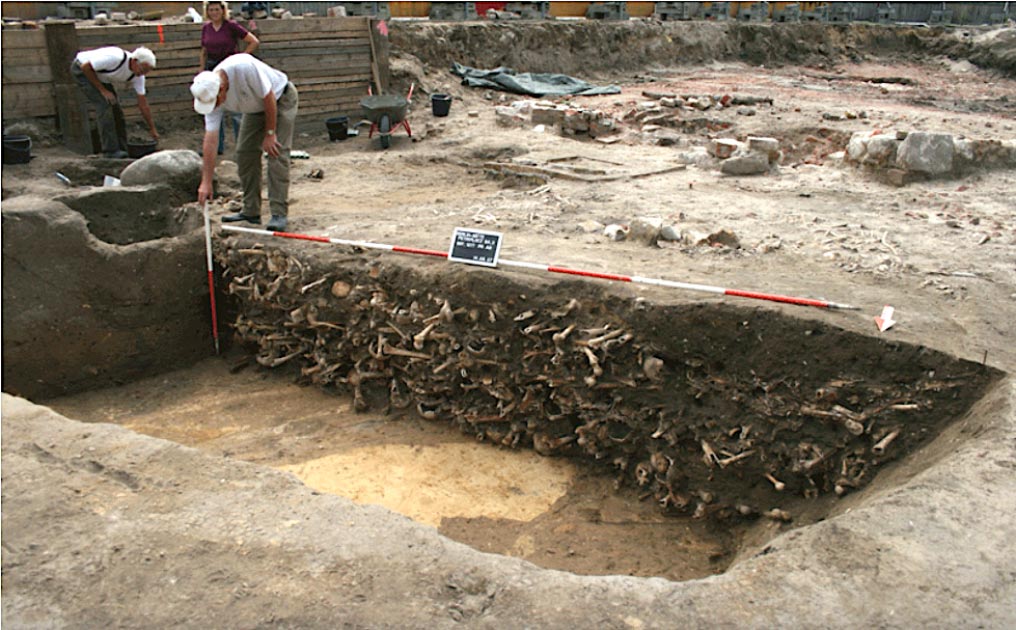 In Berlin, a historic medieval cemetery has been excavated which reveals that medieval people’s lives were blighted by hunger, disease, and extreme violence. Many of the human remains show signs of violent deaths and may indicate that Berlin in the Middle Ages was plagued by conflicts.
The cemetery was found in 2008 in Petriplatz, during the development of a car park near the former St Peter's Church. This area is in the town of Colln that merged with Berlin in the fifteenth century. Almost 4000 skeletons were found that date from approximately 1040 to 1700. According to The Daily Mail , “almost half date to between 1047 and 1299, in the period when the German capital was established.” 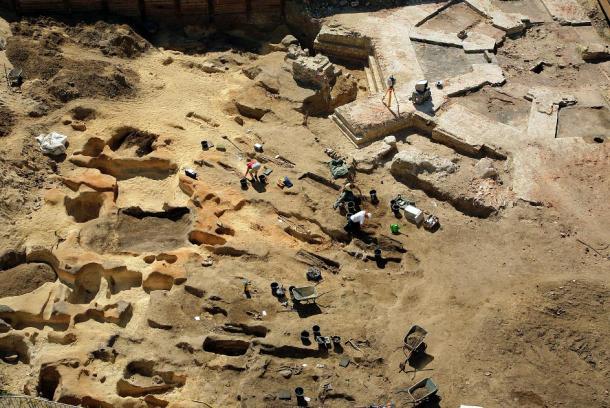 An aerial shot of the excavation site at the medieval cemetery in Petriplatz, Berlin. (Confix737 / CC BY-SA 4.0 )

The burials are transforming our understanding of the history of the German capital. Based on the bones found, it appears that the town of Colln was a hundred years older than previously thought. These finds mean that Berlin itself “may have been established as much as a century before the official year, 1237,” according to The Times . Colln and its sister-city, Berlin, were established to control the trade routes on the River Spree.  The German capital was on the frontier between Germanic and Slavic lands for many years in the Middle Ages.
German lords settled the area in the 11 th century, but it was later abandoned to the Wends, a Slavic people. Albert the Bear conquered the area in the mid-12 th century, which became known as the Margate of Brandenburg, and this eventually led to the area becoming German, as the Wends were either expelled or absorbed. By the mid-13 th century, Berlin and Colln were important trade centers in Brandenburg, which later was to play a crucial role in the history of Central Europe.

The remains studied by the archaeologists demonstrated that many people led harsh existences. There was evidence of conditions such as scurvy and rickets, that were most likely the result of poor diets. Some skeletons may also indicate that people suffered from leprosy and reveal that tuberculosis was common. This may reflect that Berlin and Colln was built on an unhealthy “splodge of swampland around the River Spree’” according to The Times . An analysis of the remains found in the medieval cemetery showed that many of those who died were from the Rhineland or Bohemia, which is now in Czechia and were probably migrants.
One grave contained a child dubbed “The Swimmer” by the researchers, according to The Daily Mail .  The skeleton indicates that the child was laid in the grave with its back arched and arms crossed. Natasha Powers from Allen Archaeology told The Daily Mail that this “can be explained by that when the child was buried, they were in cadaveric rigor, or extreme spasm, with the muscles of the back, arms and legs all contracted.” The posture would strongly suggest that that this was a result of tetanus, which is a condition that is now extremely rare because of modern medicine.

Medieval cemetery discovered under a Berlin car park reveals its original residents’ lives were plagued by conflict, disease and poor diets Signs of rickets, scurvy and tuberculosis were found on...
distincttoday.net
7:33 PM - May 25, 2020
Twitter Ads info and privacy

The site known as the Kistal Burial contained the remains of three males who had met violent deaths. They had no previous wounds, and this would suggest that they were not soldiers but rather civilians. Grave goods found with the bodies including coins indicate that they were affluent and possibly members of the local elite.
One body showed signs of a blow from a blade and his arms bore signs of defensive wounds. The second man suffered a devastating blow to the head that knocked out his teeth, and there is evidence that he suffered a fall before his death. A third skeleton was found that showed signs that the man had suffered massive head injuries, and marks on his ankle indicate that he may have been pulled out of the stirrups while on a horse. One of the victims also had his nose cut off, possibly suggesting that he had been deliberately mutilated.

The reason why these men were killed are not known. However, Berlin and Colln were in a frontier zone for much of the Early Middle Ages. It is possible that the men were killed during some unrecorded conflict between the Germans and Wends. However, medieval society was in general violent and they may have been killed as a result of a robbery or feud.
The cemetery is helping experts to rewrite the history of Berlin and Brandenburg. It is also allowing insights into the difficult lives of ordinary people. The research, which is ongoing, is helping experts to recreate the past of the German capital.
Posted by free heip at 02:57