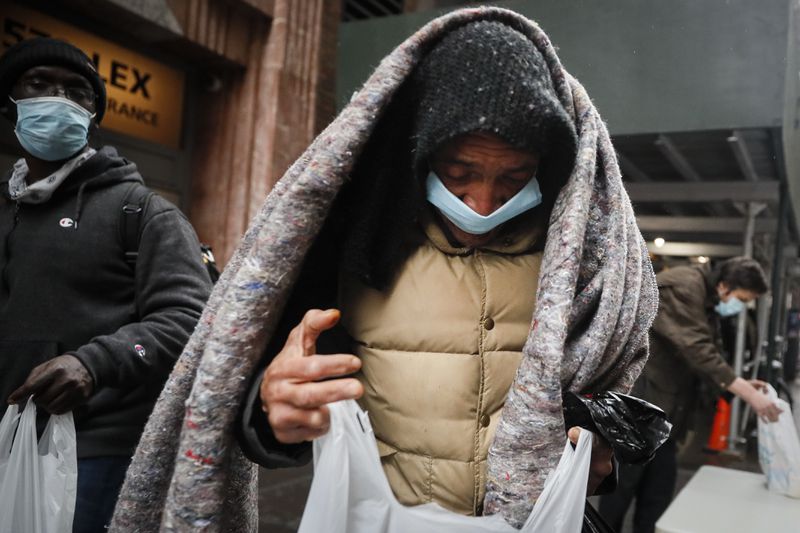 In this Friday, April 24, 2020, photo, a visitor looks inside his bag of donated food for people in need from the Coalition for the Homeless organization, at St. Bartholomew's Episcopal Church in New York.(John Minchillo/AP)


Even after two homeless men died on the subways over the weekend, Mayor de Blasio insisted the city’s long-term homelessness strategy is working and he indicated he’s not changing course.
“We have a strategy that's working,” Hizzoner said at a Monday press conference. “We’re going to apply that strategy more and more intensely. It’s even been working through the pandemic and I know it will work more and more as we come out of the pandemic.”
He was referring to the “Homestat” program in which city workers contact people living on the streets and try to connect them with services, as well as an undertaking he announced last year to end street homelessness by the end of 2024.
The city has set up 700 “isolation units” at five locations available to homeless people who test positive for COVID-19, according to the Department of Homeless Services. As of Sunday, there were 68 people in those units, with 22 others having gone through isolation and “departed healthy,” DHS said.
But the problem, advocates say, is that before becoming eligible for an isolation unit, city policy requires the street homeless to go to a hospital or shelter — a terrifying prospect in the age of coronavirus.
Advocates and City Council members want the city to provide hotel rooms for the street homeless for the same reason.
“More of the same means more deaths for homeless people,” Paulette Soltani, political director of Vocal NY, told the Daily News. “The whole point of [isolation] is to prevent people from getting sick, to prevent them from dying.”
The City Council is weighing a bill requiring the city to put every adult homeless person in a single hotel room, a measure the de Blasio administration has resisted, citing prohibitive costs. About 7,000 of the 17,000 single adults living in shelters have been moved to double-occupancy hotel rooms, DHS Commissioner Steven Banks said Monday.
Asked whether the city will provide medical care to homeless people who stay on the subways — an estimated population of 2,000 — the mayor said, “We do already send out teams to check on homeless folks that can do and often do include a doctor or a nurse.”
De Blasio said daily closures of the subways for cleaning, from 1 a.m. to 5 a.m., have created “a better chance for us to engage homeless folks.”

However, homeless advocates say the city’s approach to homeless people on the subways — in which it’s often the police who rouse them from sleep — is heavy-handed and counterproductive.

“Subway closures and police sweeps are leading to people literally dying on the train,” Soltani said.

As of Monday, 65 homeless people had died of COVID-19, according to DHS, and the department was tracking 823 positive cases among the homeless.

Banks noted the department had been trying to bring the two men who died on the subways off the streets.

“[It’s] just a tragedy when we lose people,” he said at the press conference. “It’s a difficult process. It can take dozens if not more encounters to bring somebody in.”