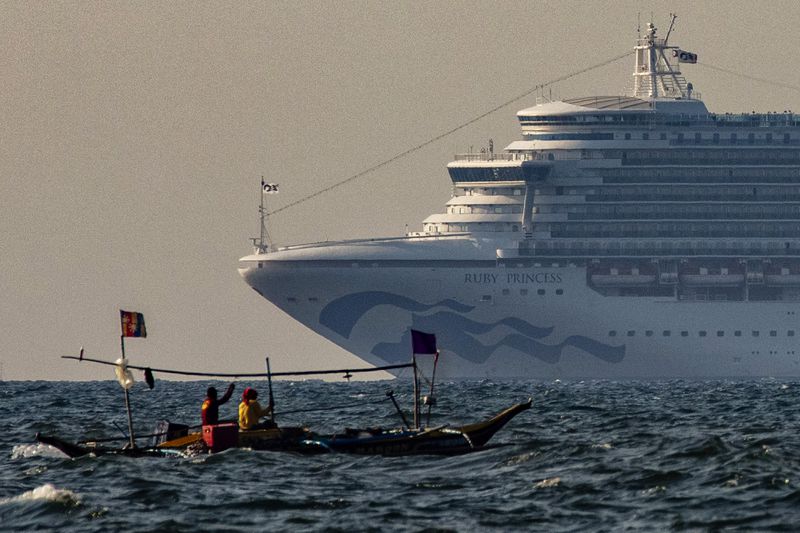 A small fishing boat passes by the cruise ship, Ruby Princess on May 7, 2020 in the waters of Manila Bay, Philippines. Carnival Corp, owner of the ship, says it’s got 7,500 Filipinos on its ships in Manila, waiting to be allowed into their country. They are some of the more than 100,000 crew members stranded at sea since mid-March due to the coronavirus.(Ezra Acayan/Getty Images)


Upwards of 100,000 cruise line crew members are still stranded worldwide after more than two months at sea, caught on ships since mid-March as the coronavirus crisis shut down sailing. Many aren’t being paid, and some have killed themselves.
While passengers were repatriated quickly, employees were encouraged to wait out what cruise lines thought would be 30-day hold on sailing, The Miami Herald reported. But soon after, the U.S. Centers for Disease Control and Prevention (CDC) issued a 100-day no-sail order, which runs into the summer, as USA Today reported.
By the time those firmer restrictions came down, it was too late to repatriate many.
Making repatriation difficult is that in some cases, quarantine and reentry requirements differ from country to country, the Herald reported. In the U.S., the CDC mandates private charter flights for people coming off cruise ships, a measure the cruise lines deem too pricey.
While many crew members are healthy, others are getting sick as COVID-19 continues to circulate on their ships, The Herald said.
The employees are beyond antsy as the confinement gnaws at their mental health. Some have committed suicide. Others swear they’ll never work in the cruise industry again. Others are going broke, since they have not been paid even promised wages, The Herald reported.
They don’t know when it will end.
According to The Herald, 37% of Carnival Corp.’s crew has been repatriated, MSC has sent 76%, Disney Cruise Line 33%, and Royal Caribbean an estimated 23%.
Compounding the issue is that large numbers of these crew members live in countries whose borders are still closed.

“Our goal has been to repatriate our crew members as quickly as possible, but that has proven to be much more difficult in recent weeks because of port closures, country closures and global travel restrictions,” Carnival Corp. spokesman Roger Frizzell told The Miami Herald. “As a result, there have been numerous complications and challenges. For example, we have 7,500 Filipinos on our ships in Manila, currently waiting to be allowed to go ashore.”

That’s not translating into a speedy departure, and it’s taking a toll.

A 39-year-old Ukrainian crew member died after leaping off the Regal Princess in Rotterdam port, Carnival Corp. told Fortune. Another worker died on the Carnival Breeze, the company said, and a crew member went overboard off the Jewel of the Seas earlier this month, Royal Caribbean told Fortune.

The administrator of two Facebook pages for stranded crew members and their families told Fortune that she’s receiving suicidal messages.

“Many of these people have been isolated in their small cabins for 21 hours a day, and they’re breaking down from the loneliness and stress,” former Norwegian Cruise Line guest manager Krista Thomas told Fortune. “Many have been told to pack quickly to leave, and then their charter flights get canceled. Those highs and lows are taking their toll.”
Posted by free heip at 05:05