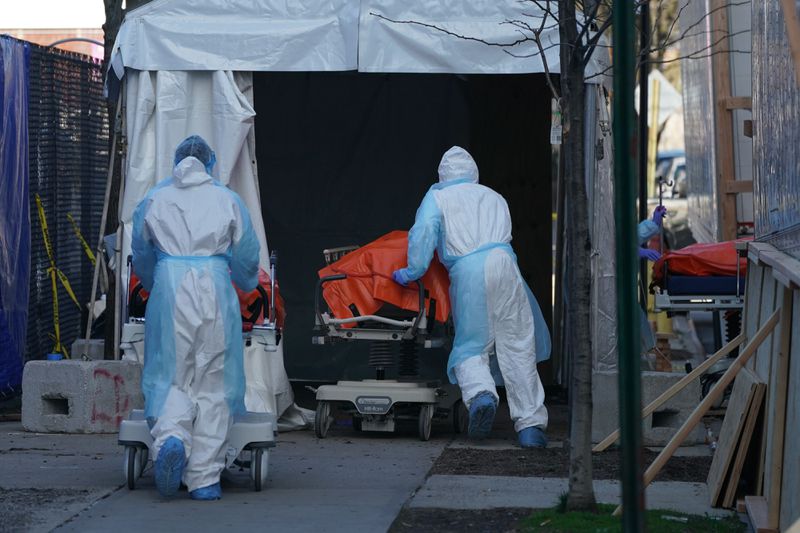 In this file photo bodies are moved to a refrigerator truck serving as a temporary morgue outside of Wyckoff Hospital in the Borough of Brooklyn on April 4, 2020 in New York.(BRYAN R. SMITH/AFP via Getty Images)

New York City reported nearly 20,000 people who have died from coronavirus as the number of confirmed cases grew over 176,000 by Thursday night.

There were 14,389 confirmed and 5,313 probable deaths from COVID-19 in the five boroughs as of 6 p.m. Thursday, according to data released by the city Health Department on Friday.

That’s a total death toll of 19,702 – 162 more people reported to have died from the virus since the same time Wednesday night.

There were 176,086 confirmed cases of coronavirus as of Thursday night, up by 1,377 from the day before.

An estimated 43,913 total hospitalizations have happened from coronavirus citywide, including 169 in the 24 hours since Wednesday night.

Most confirmed deaths from coronavirus were in older New Yorkers and those with preexisting medical conditions that made them more vulnerable to the disease, including diabetes, asthma, lung disease, cancer and immunodeficiency.

Queens still has the most confirmed cases of the five boroughs, though the Bronx and Staten Island each have more per 100,000 people.

Queens had 54,558 confirmed cases and 5,510 reported deaths as of Thursday night.

The borough tallies include probable deaths. But gaps in information remain because reports on 1,064 probable deaths — including the borough of residence — hadn’t been completed as of Thursday night.

As new information becomes available, some deaths that were previously classified as probable or not known to be confirmed or probable COVID-19 may be reclassified as confirmed.

“Confirmed” deaths are when a victim tested positive for COVID-19 before he or she died. “Probable” deaths are logged when a victim’s death certificate listed the cause of death as the virus or something equivalent, but they were not known to have gotten a positive test result.

The city has also said the 176,086 confirmed cases are likely far less than the total number of people infected because thousands can’t or won’t be tested despite being sick.