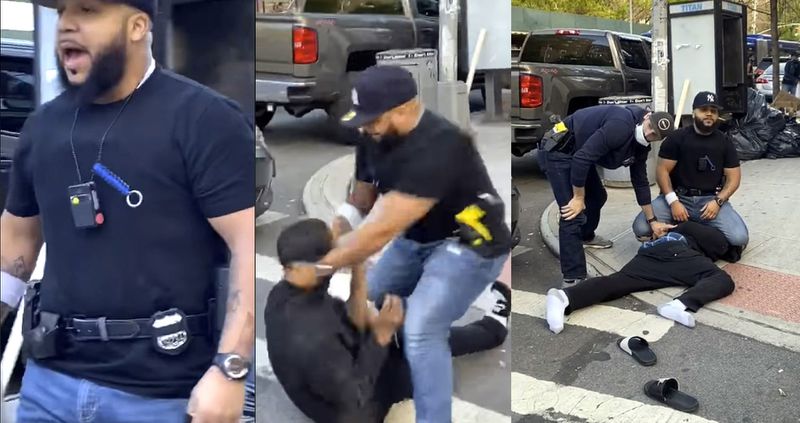 The video, which has spread quickly on social media, shows officers making an arrest on 9th St. and Avenue D Saturday when one officer gets up, draws his Taser and approaches a bystander while yelling, “Move the f--k back right now... Don’t flex.” (Daquan Owens / Facebook)(Facebook.com)


An NYPD cop making an arrest in the East Village for a social distancing violation threatened a bystander with a Taser and then punched him to the ground, startling video shows.
The video, which has spread quickly on social media, shows officers making an arrest on 9th St. and Avenue D just after 5:30 p.m. Saturday when one cop gets up, draws his Taser and approaches a bystander while yelling, “Move the f--k back right now... Don’t flex.”
Police said the bystander, 33-year-old Donni Wright, had been ordered to disperse but he instead “took a fighting stance.”
The plainclothes cop, identified by sources as Officer Francisco Garcia, holstered his Taser and grabbed Wright, punching him multiple times in the face and body and then using his leg to pin him to the ground by the neck.
Mayor de Blasio blasted Garcia in a tweet Sunday evening.
“Saw the video from the Lower East Side and was really disturbed by it,” he wrote. “The behavior I saw in that video is simply not acceptable.”
Garcia has since been placed on modified desk duty and stripped of his gun and badge, according to police sources.
The mayhem began when cops approached a group not following social distancing mandates aimed at curbing the spread of coronavirus. Some of the group dispersed but others refused to, cops said, and responding officers found a large amount of marijuana in open view, according to police.
The owner of the marijuana immediately became aggressive, according to cops and a woman with him tried to intervene in the arrest.
That’s when Wright, watching the chaotic arrests unfold, was told to scram but refused to, according to cops.
But Daquan Owens, who filmed the video with his cellphone, told the Daily News the attack on Wright was totally uncalled for.
“The guy that just got slammed to the floor and punched, he was just standing there saying, ‘They didn’t do nothing,’ and actually they didn’t do nothing," Owens said.
“Nothing was going on, nothing provoked the cop. He just got up, pulled his Taser out,'” Owens added. “The cop, I guess he was frustrated and took his frustration out on the guy.”
Wright was arrested and charged with assault on a police officer, menacing, resisting arrest, obstructing governmental administration, and two counts of disorderly conduct.
The man and woman initially being arrested, Shakiem Brunson, 31, and Ashley Serrano, 22, were both hit with a slew of charges including resisting arrest, weapon possession and disorderly conduct. Brunson was also charged with marijuana possession.
All three were awaiting arraignment in Manhattan Criminal Court Sunday evening.
During a coronavirus press conference on Sunday, NYPD Commissioner Dermot Shea said the NYPD Internal Affairs Bureau was investigating.

“Regardless of what transpired before the video, what is the justification for the rage?” Councilwoman Carlina Rivera, who represents the neighborhood, tweeted. “Where’s the professionalism and de-escalation tactics we should expect? We will hold these officers accountable.”

Garcia has a history of being targeted in lawsuits resulting in settlements including being named in a claim that ended in a $120,000 settlement in 2016, according to CAPstat, an online database of legal actions filed against the NYPD.

“City Hall and the NYPD need to seriously reconsider social distancing enforcement that leads to escalations involving the use of tasers and violent assaults,” said Tina Luongo, Attorney-in-Charge of the Criminal Defense Practice at The Legal Aid Society. “What is equally disturbing is that some of these officers - who were ostensibly enforcing social distancing laws - were in violation of those same very laws themselves by not wearing protecting masks, endangering the lives of all New Yorkers around them. We call on the NYPD to release the names of all these officers at once and call for their immediate discipline."

“I don’t know how we went from social distancing to marijuana arrest to a full take down of that level," Adams said.
Posted by free heip at 03:42