The Hitler Diaries Hoax: How Germans Faked Something Everyone Would Read 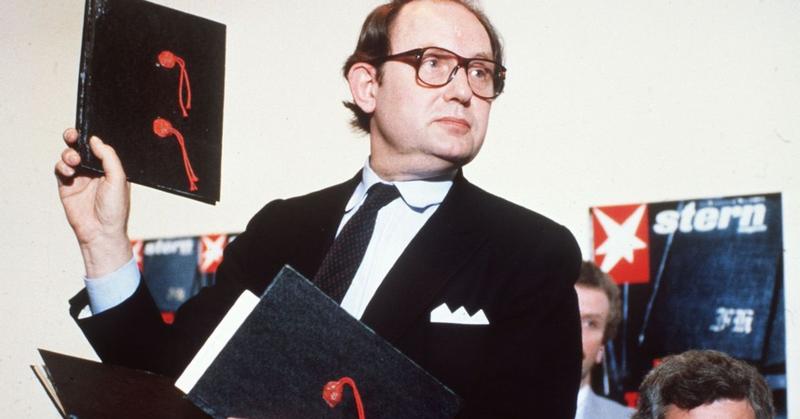 On April 25, 1983, Stern magazine, Germany’s version of Life, announced to the world that they'd come into possession of Adolf Hitler's diaries. It was an astonishing find: Until that moment, no one knew that Hitler even kept diaries. According to Stern, the diaries were lost in a plane crash in 1945, but they'd finally been recovered for the world to see. The so-called diaries related some of the most salacious details about Hitler that had ever been heard, from accounts of Eva Braun's pregnancy to his jealousy of Stalin. There was only one problem: There were no lost Hitler diaries. They were forgeries. It took weeks for the truth to come to light, so for a brief period in the early '80s, historians and World War II buffs believed that they'd hit upon the holy grail.

An Amateur Forger With Big Ideas

Born and raised in East Germany, Konrad Kujau was a lifelong criminal with a history of selling Nazi memorabilia dating back to the 1970s. There have always been buyers for this kind of thing, but Kujau discovered that he could ask for higher prices if he used his forgery skills to make the pieces seem more authentic. Kujau sold helmets and weapons that he claimed were used by Hitler and documents that he claimed were written by Joseph Goebbels, but his techniques were fairly crude. He used modern printing technology to create stationary and attempted to make documents look era-appropriate by dipping them in tea. 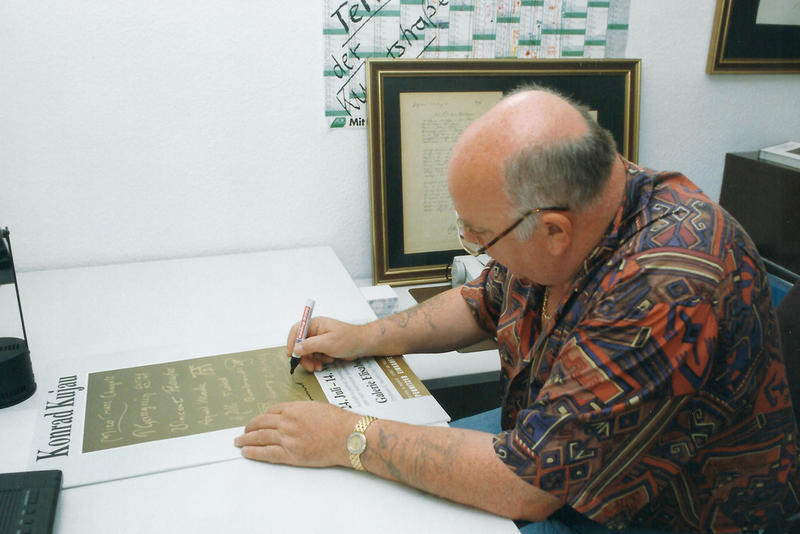 Not His First Rodeo

Kujau had a large enough customer base that he was able to sell a considerable amount of forged artwork to people who wanted original paintings by Hitler. Kujau assumed because he was an amateur painter that his work would pass just as well for Hitler's amateur paintings, and his plan actually worked. He went on to copy the manuscript of Mein Kampf by hand to pass it off as an early version of the text even though the originals were produced by typewriter. After that sold, he produced a false introduction for a third volume of the book, assuming that one would actually show up at some point. 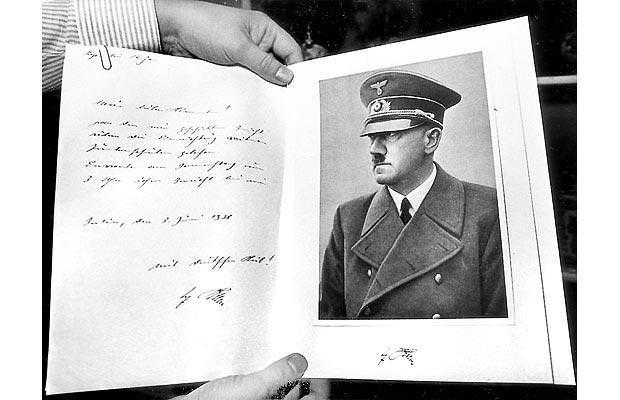 Like many people, greed took hold of Kujau in the early '80s, and he started boasting that he'd come across a truly groundbreaking item titled Political and Private Notes From January 1935 Until June 1935. Adolf Hitler. The look of the diaries were official enough: They were sealed with red wax, a black ribbon, and the initials "F.H." in in brass-plated tin.

Kujau explained that his brother, Major General Fischer of the East German Army, found the documents along with a series of other collectibles following a plane crash in Dresden that occurred in 1945. Gerd Heidemann, a reporter for Stern, convinced the paper that the diaries were genuine, and they didn't bother to look into it any further.

It was bad call. By all accounts, Heidemann was obsessed with the Nazi era, even though his brand of fanaticism was and is still looked down on in Germany. It's unclear if he believed the documents were real or just wanted to craft a kinder image of Hitler. Kujau claims that Heidemann worked alongside him to milk as much cash as they could from Stern, but that's still contested. 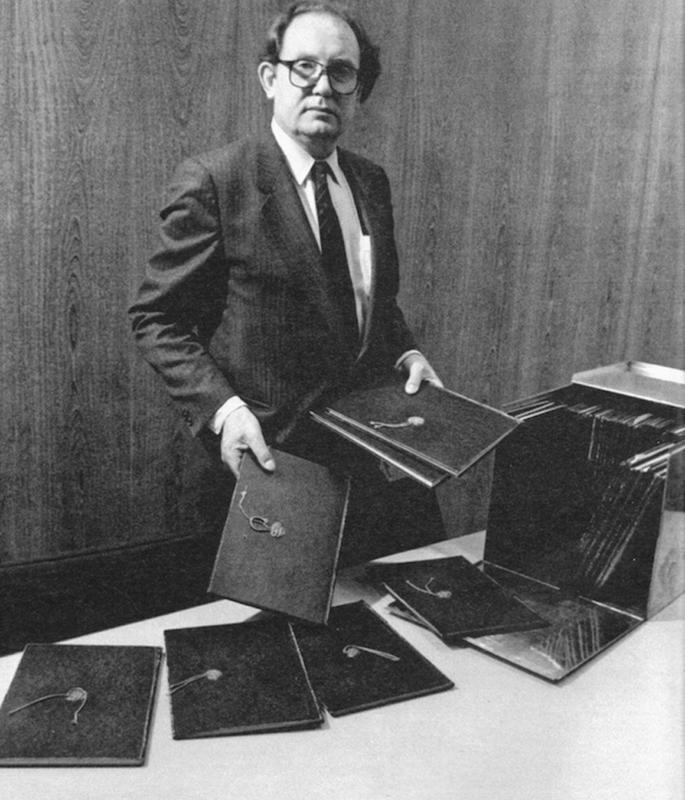 After the initial interest in the single volume of Hitler's diaries, Kujau went on to write at least 60 volumes of the Furher's supposed personal thoughts throughout World War II in his own handwriting. All in all, Stern spent 9.3 million Deutsche marks (about $19 million at the time) on the diaries and moved quickly to syndicate them in international outlets like Newsweek and the Times of London.

To keep the findings a secret, Stern rushed the authentication of the diaries and went ahead with a press conference to announce the newfound works of Hitler on April 25, 1983. Just days later, however, the German Federal Archives reported that Stern was in possession of false documents. Additional research showed that the paper, ink, and string used in creating the "personal" seals were all produced after the Second World War, making it impossible for Hitler to have written the diaries. 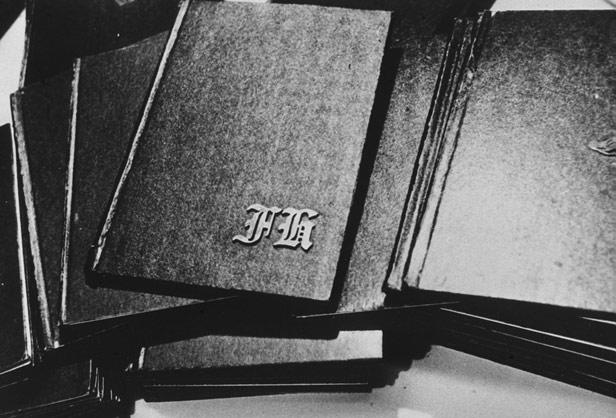 In 1983, Newsweek ran a special report on the diaries, including brief excerpts of the "findings" by Stern. The entries from the diary ran alongside commentary by Professor Gerhard L. Weinberg of the University of North Carolina, an academic expert on Hitler, who stated:

On balance, I am inclined to consider the material authentic ... The new find should be read with a giant saltshaker at hand. There is still room—however unlikely—for suspecting that the whole thing is a hoax. An obvious motive would be money. Another would be an attempt to rehabilitate Hitler.

The diaries included notes on Hitler's home and work life at the time, thoughts on Stalin and Churchill, and commentary on his relationship with Eva Braun. All of it was fiction.

Kujau and Heidmann were put on trial 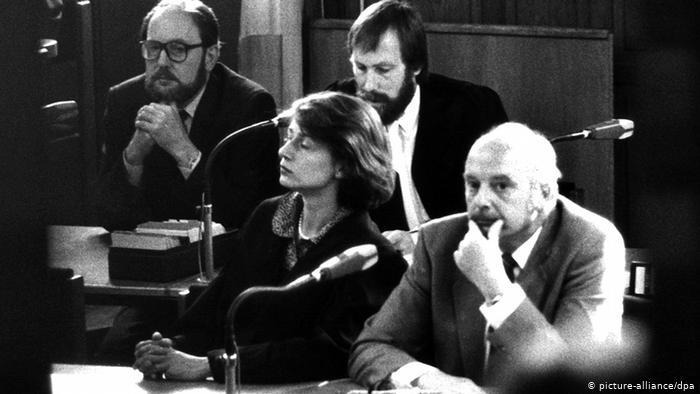 Forgery And Journalist Were Convicted

Both Heidemann and Kujau were put on trial in Germany, which turned into a "he said, he said" mudslinging match between the forger and the quasi-journalist. Kujau admitted his forgeries and spent most of the trial attempting to implicate Heidemann in the scheme to bilk millions out of Stern, while prosecutors went out of their way to show the jury Heidemann's large collection of Nazi memorabilia, which included Nazi-era beer mugs, military hats, and a swastika banner that was supposed to have adorned Hitler's opera box.

Kujau treated the trial like a job interview for his post-prison life. When asked if a watercolor purchased by Heidemann was a legit piece by Hitler, Kujau said, "That was a genuine Kujau-Hitler, your honor." In 1985, both men received four years and eight months in prison. 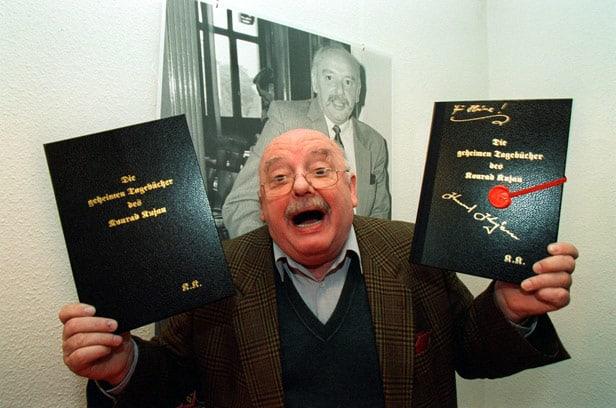 By the time Kujau was released from prison, he was legitimately famous in the art world. He opened a gallery of forgeries in Stuttgart, Germany and later moved to Majorca, where he was known to practice forgery on demand for tourists. A kind of gentleman bandit, when he passed away in 2000, The Guardian noted that "he might still be around somewhere, having pulled off his last grand sting."

Heidemann didn't receive the same treatment. In 2008, he was reportedly destitute and living alone on a government stipend in a small flat in Hamburg.