The Polio Epidemic: A Brief History Of The 20th Century's Most Feared Disease 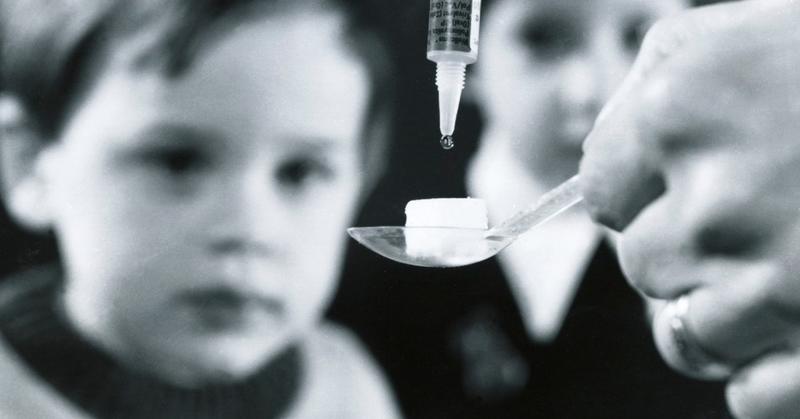 (Wellcome Images/Wikimedia Commons)
In the early 20th century, polio was one of the most debilitating diseases to rock the planet. The illness was easily spread, and it afflicted millions of people with paralysis, fatigue, and muscle weakness. It was an era that brought together people of all stripes to beat the nasty scourge. The efforts by such far-flung opposites as Jonas Salk, Elvis Presley, and President Roosevelt finally brought polio to an end, but not without many trials and tribulations. Mostly trials.

Polio is spread from person to person through a variety of means. In most cases, it moves through food or water contaminated with human feces, or less often, infected saliva. A person infected with the polio can walk around for up to six weeks without showing any symptoms, spreading it around as they go. Then, suddenly, they wake up one day to find that they can't move.
Millions of dollars were invested in developing a polio vaccine. In 1950, virologist and immunologist Hilary Koprowski tested the first successful one at the Wistar Institute in Philadelphia. Following this test, polio rates topped out around 25,000 cases annually. By 1953, there were 35,000 cases reported, with 1,400 deaths resulting from the illness. 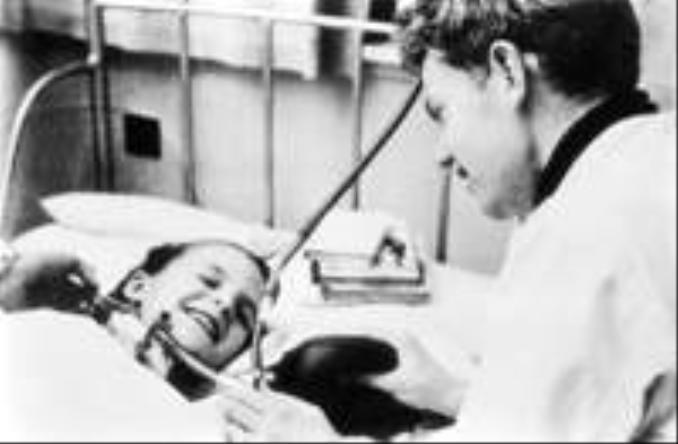 
Not All Polios Were Created Equally

Between 1952 and 1953, Denmark experienced one of the worst outbreaks that had ever been recorded in Europe, with an 87% mortality rate among sufferers of polio. The country put together teams of medical professionals ranging from volunteer medical students to nurses, anesthesiologists, and even dental students to work on easing the suffering of patients with necrotic brain lesions caused by the virus. After implementing the use of IPPV, or positive pressure ventilation, the mortality rate in Denmark dropped, although it didn't wipe the illness out completely. 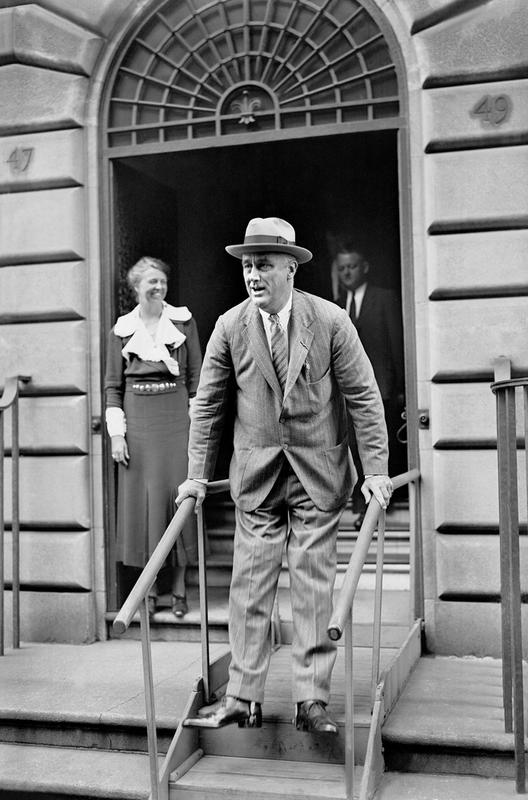 The most famous polio patient was President Franklin D. Roosevelt. He contracted the virus in 1921 from an unknown source and suffered permanent paralysis as well as a loss of two inches of height. Even while facing these ailments, he rose to the office of Governor of New York in 1928, where he served until 1933, when he was elected President of the United States. In his first 100 days, FDR created the New Deal program to help America recover from the Great Depression.
Even after he was paralyzed by polio, Roosevelt was in excellent health through much of his presidency. In fact, he was known for having amazing strength in his upper body, as he had to use it to get around. In 1924, he began receiving hydrotherapy in Warm Springs, Georgia, where he regained some use of his legs while wearing iron braces or through a "two-point walk" that required the help of another person. On April 29, 1926, he purchased Warm Springs to turn it into a polio rehabilitation center. 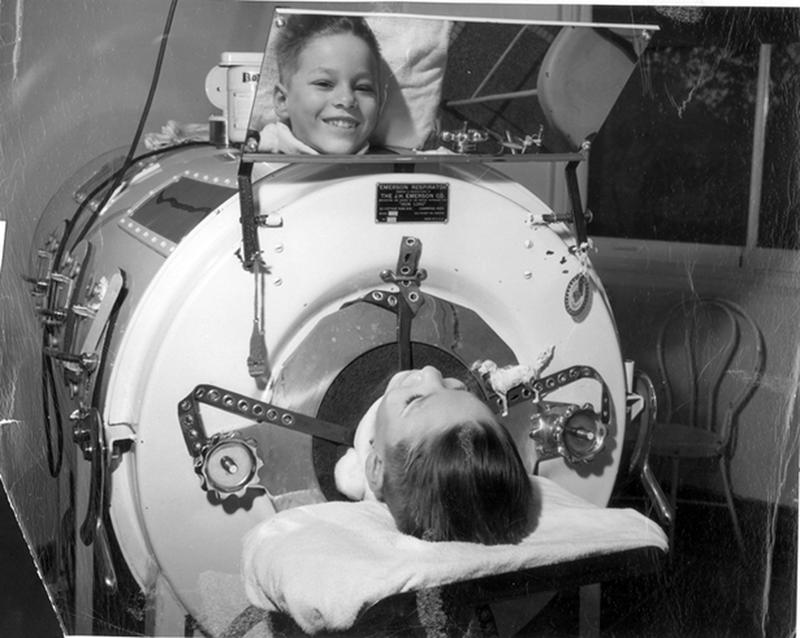 Prior to the polio vaccine, one of the only ways to treat the illness was with an iron lung, the colloquialism for a large respirator that helped patients with paralyzed diaphragms. Patients could spend up to two weeks in one of these uncomfortable contraptions that used negative pressure ventilation to pump the patient's chest and stimulate breathing. While in the iron lung, the only thing a patient could do was lie there and breathe. Even if a patient was in a ward with multiple people suffering from polio, they couldn't even have conversations. 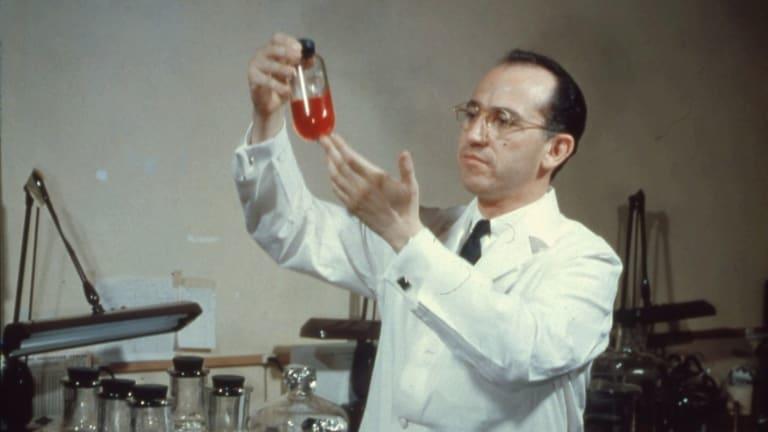 Polio affected so many people across the world that researchers and scientists were all vying to be the person who cured this horrible disease. While polio vaccines were being tested as early as 1950, it wasn't until 1952 that Jonas Salk and his team at the University of Pittsburgh developed an effective cure. On March 26, 1953, Salk appeared on CBS Radio to announce his successful tests on groups of both adults and children.
A successful field trial was finally announced on April 12, 1955, 10 years after the death of President Roosevelt. Salk's vaccines were shown to be more than 90% effective against several types of polio, so American health authorities embarked in a widespread campaign to vaccinate the nation's children. 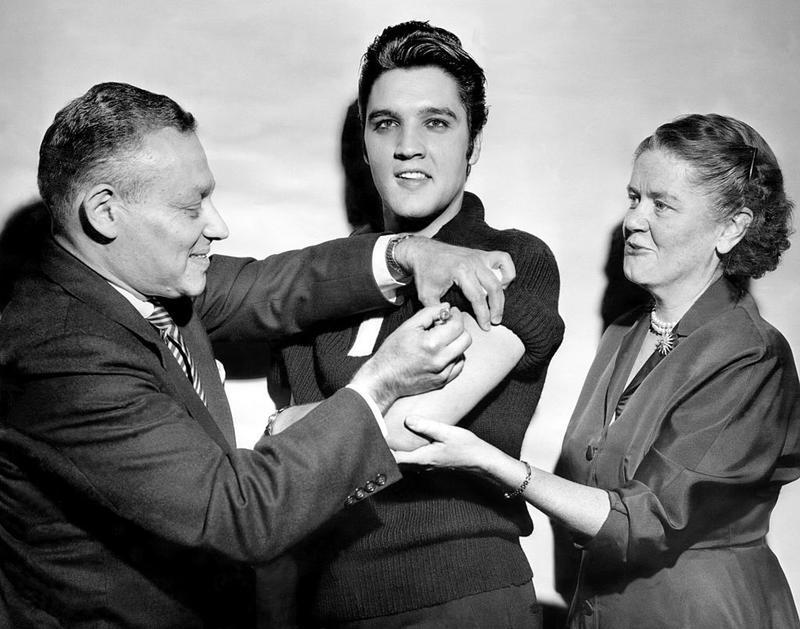 
Elvis Got Vaccinated On TV

Getting their hands on a successful vaccine was only the U.S. government's first hurdle in the fight against polio. They still needed to get people on board with vaccinations, and who better to influence the youth than Elvis Presley? In 1956, Presley was riding high on his hit "Heartbreak Hotel," and he was only going to get more famous. Prior to his appearance on The Ed Sullivan Show on October 28, The King was asked if he would take part in a campaign to inspire mass vaccination among young people. He jumped at the opportunity and allowed himself to be photographed receiving the inoculation.
After seeing Elvis receive the polio vaccine, people started lining up to be just like the superstar. In the six months following his public vaccination, the rate of inoculation among American teens jumped from 0.6% to more than 80%. 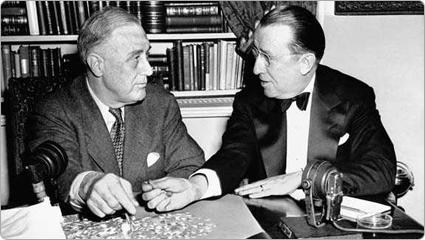 
The March Of Dimes

One of the main avenues through which America has funded polio research is the March of Dimes, which was initially founded as the National Foundation for Infantile Paralysis by President Roosevelt on September 23, 1937. He left the actual fundraising to celebrities like Eddie Cantor, a vaudeville star, singer, comedian, and television personality dedicated to ending to polio.
Cantor met with W. S. Van Dyke II and Harry Mazlish of Warner Bros. in the office of John Considine, Jr. at MGM Studios to work out a game plan for raising money. When it was suggested that everyone in America donate one dollar, he countered that a dollar might be too much, but everyone could spare a dime. He explained:

The March of Dimes will enable all persons, even the children, to show our President that they are with him in this battle against this disease. Nearly everyone can send in a dime, or several dimes. However, it takes only 10 dimes to make a dollar, and if a million people send only one dime, the total will be $100,000.

Following the development of polio vaccines by Jonas Salk and various researchers, the March of Dimes has shifted its focus to preventing premature births, congenital disabilities, and infant mortality. You know, the things you walked around your elementary school gym to raise money for.