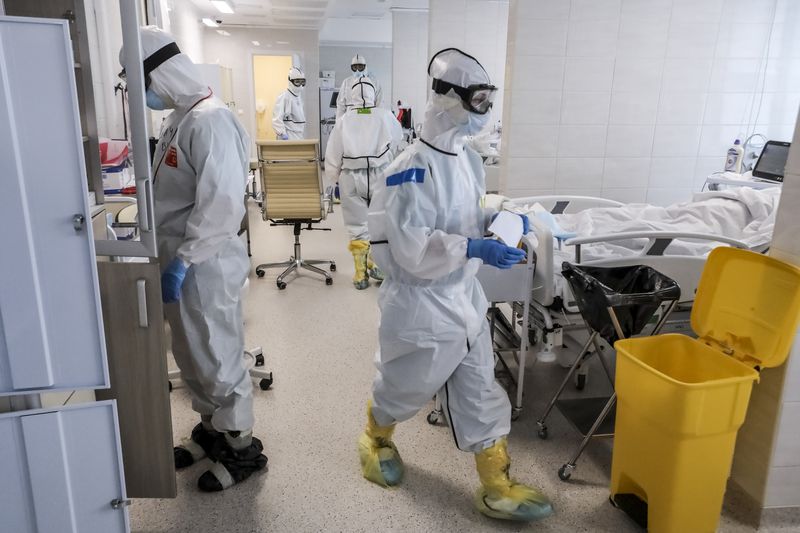 In this photo taken on Saturday, May 2, 2020, doctors work inside the intensive care unit for people infected with the new coronavirus, at a hospital in Moscow, Russia.(Sophia Sandurskaya/AP)


Over the course of just two weeks, three healthcare professionals battling the coronavirus pandemic in Russia have fallen from hospital windows, renewing citizens’ focus on the health crisis as the illness continues its brutal spread across the nation.
Two of those healthcare employees are dead, and a third identified, as Alexander Shulepov, remained hospitalized. The 37-year-old paramedic from Voronezh, was in critical condition Tuesday following his fall from a second-story window over the weekend.
Shulepov was being treated at the time for coronavius at the Novousmansky hospital in the town of Novaya Usman, where he also worked, according to the Moscow Times. He was left with a skull fracture following his fall on Saturday.
He was previously diagnosed with coronavirus on April 22, the same day his colleague, Alexander Kosyakin, posted a video of Shulepov claiming he’d be forced to work despite his COVID-19 infection.
Just days later, the clip was taken offline and replaced with a video of Shulepov and the hospital’s head doctor, Igor Potanin, who pushed back against claims suggesting staff were not being provided with enough personal protective equipment, according to CNN.
“I spoke about this to the department’s employees: I won’t let anyone go to outpatients or inpatients if we don’t have enough means of protection, I told them I’d go there myself, but I will not send anyone,” he said.
Shulepov added that he was “overwhelmed by emotions” when he made the first video with his friend and recanted his statements.
Kosyakin, who confirmed details of the social media post to CNN, has also previously slammed the government for its lack of protective gear shortages. He said he was later questioned by law enforcement for spreading false information.
“[Shulepov] is an intensive care unit, as far as I know in a serious condition, last time I spoke to him was on the 30th of April, we checked on each other” he told the news station.

“He felt fine, he was getting ready to get discharged from the hospital... and all of a sudden this happened, it’s not clear why and what for, so many questions that I don’t have the answer to.”

Shulepov is the third physician to recently fall from a window under mysterious circumstances in Russia, a nation well-known for eliminating critics and naysayers. Some of them have similarly fallen to their deaths in recent years.

On Friday, Yelena Nepomnyashchaya, who served as acting chief physician at a hospital for war veterans in the Siberian city of Krasnoyarsk, died from the injuries she sustained after a fall from her fifth-floor office window on April 25. According to local news stations, she’d just wrapped up a discussion with the regional health minister, who suggested creating a ward specifically for COVID-19 patients, when she fell.

She reportedly opposed the move given the facility’s staff and equipment shortages, sparked by the pandemic

The day before, 48-year-old Natalya Lebedeva, who was chief of the ambulance center in Zvyozdny located just outside Moscow, similarly died after a fall from a hospital window. She too was reportedly being treated for coronavirus at the time.
Posted by free heip at 06:11