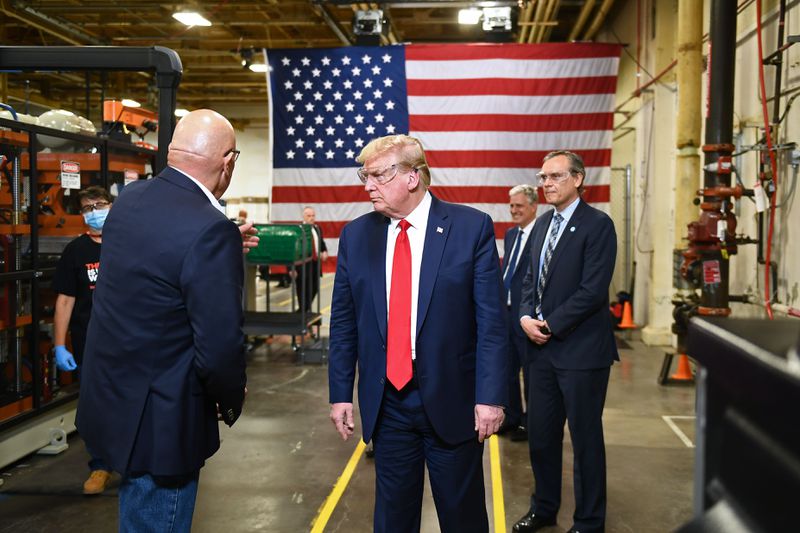 President Trump participates in a tour of a Honeywell International plant that manufactures personal protective equipment in Arizona.(BRENDAN SMIALOWSKI/AFP via Getty Images)

Death is apparently a price President Trump’s willing to pay for the economy.

The president declared Tuesday that the economy must reopen “soon" even if that means people will be “affected badly," sending a decidedly mixed message to the nation as the U.S. coronavirus death toll surged above 70,000.

Trump floated the shocking proposal while touring a face mask-producing facility in Phoenix, Arizona — his first cross-country trip in months.

Comparing the coronavirus pandemic to a war, Trump added, “The people of our country are warriors.”

In nearly the same breath, Trump confirmed that his coronavirus task force is preparing to disband.

Instead of focusing strictly on combating and containing the fast-spreading virus, Trump said the task force will transition into “a different form” focused on “reopening.”

“We’ll have a different group, probably, set up for that," he said.

Before the pandemic grounded American life to a halt, Trump’s bid for reelection was largely pitched on the strong state of the economy. His rush to reopen the country suggests he’s eager to get back to that message.

Vice President Mike Pence told reporters at the White House earlier in the day that the goal is to dissolve Trump’s COVID-19 task force entirely by Memorial Day.

“Conversations are being had about winding down the work,” said Pence, who heads the task force.

Dr. Anthony Fauci, the nation’s top infectious disease expert and a senior task force member, apparently hasn’t been looped in on those conversations.

Ahead of Pence’s announcement, Fauci told CBS News that rumors about the task force drawing to a close were “not true.”

"I’ve been in every task force meeting, and that’s not what they are doing,” Fauci told the network.

Fauci, who has consistently warned against rushing to reopen the U.S. economy, did not return multiple requests for comment Tuesday.

Asked if Fauci agrees with the decision to close up shop, Pence spokeswoman Katie Miller told the Daily News, “Go ask him.”

Trump’s aggressive push for reopening the economy came as the U.S. coronavirus death toll neared 71,000, with the tragic count ticking higher by the hour.

A new model from the University of Washington, meanwhile, suggested that the death tally could jump to 134,000 by the end of this month, as states start acting on Trump’s orders to loosen social distancing restrictions.

An internal projection from Trump’s Federal Emergency Management Agency that surfaced Monday offered a similar assessment, predicting that the daily U.S. death toll could soar to 3,000 by the start of June, compared to a current level of roughly 1,750.

Trump, whose administration incorrectly projected last month that only 60,000 Americans would die from the virus, said in prepared remarks at the mask manufacturing facility that he mourns “every life lost.”

“We pray for every victim,” he said. “We shoulder this burden together.”

Trump’s decision to press full steam ahead with reopening the economy even as the pandemic appears nowhere near an end reminded some of President George W. Bush’s infamous “mission accomplished” speech at the outset of the Iraq War.

“Are you saying mission accomplished?” a reporter asked after Trump gave notice that his task force is wrapping up.

“No, no, not at all,” Trump demurred. "The mission accomplished is when it’s over.”