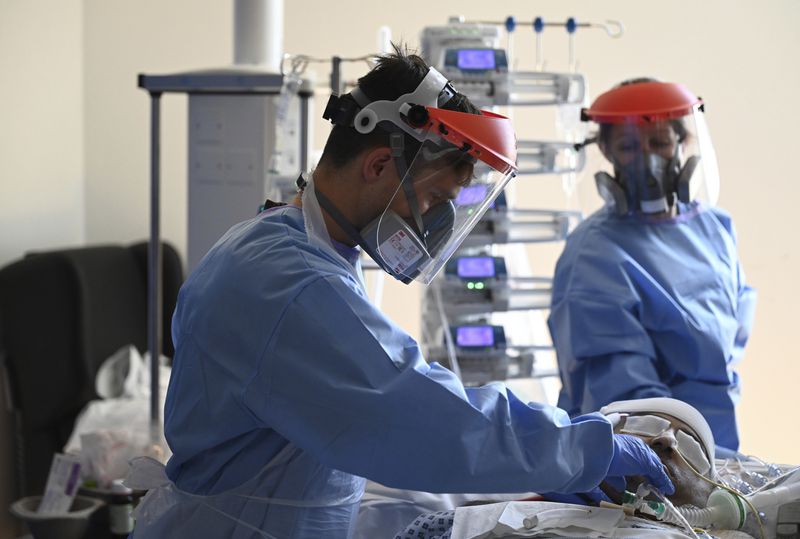 Members of the clinical staff wearing Personal Protective Equipment PPE care for a patient with coronavirus in the intensive care unit at the Royal Papworth Hospital in Cambridge, England, Tuesday May 5, 2020. (Neil Hall/Pool via AP)(Neil Hall/AP)

Coronavirus has killed at least 32,000 citizens across the United Kingdom — more than anywhere in all of Europe.

The nation’s COVID-19 death toll for the first time has surpassed the one in Italy, once among the hardest hit countries in the world. According to the most recent figures from Johns Hopkins University, fatalities across the UK climbed to 29,501 by Wednesday, just surpassing the 29,315 recorded in Italy, which does not include suspected cases.

With the addition of the official death figures for Scotland and Northern Ireland, it brings the UK’s toll to 32,313, according to the Guardian.

The number of deaths is “higher than we would wish, I think is all I can say,” Angela McLean, chief scientific adviser of Ministry of Defense, said during the country’s press briefing on Tuesday.

The United States remained the global leader in deaths this week, with a total of 71,078 dead so far. With more than 1.2 million confirmed cases, it also has more coronavirus infections than anywhere in world.

The nation is followed by Spain, where 219,329 people have been infected, and then Italy, which has so far recorded 213,013 citizens sickened. The top five is rounded out with Great Britain, where 196,243 people have been diagnosed, and France, where there is at least 170,964 confirmed cases.

“I don’t think we’ll get a real verdict on how well countries have done until the pandemic is over,” British Foreign Secretary Dominic Raab said Tuesday.

“And particularly until we have comprehensive international data on all causes of mortality.”

Officials in the UK earlier this month extended lockdown guidelines implemented to slow the fast-spreading coronavirus. Should they remain on track, some non-essential businesses could begin reopening the second week of May.