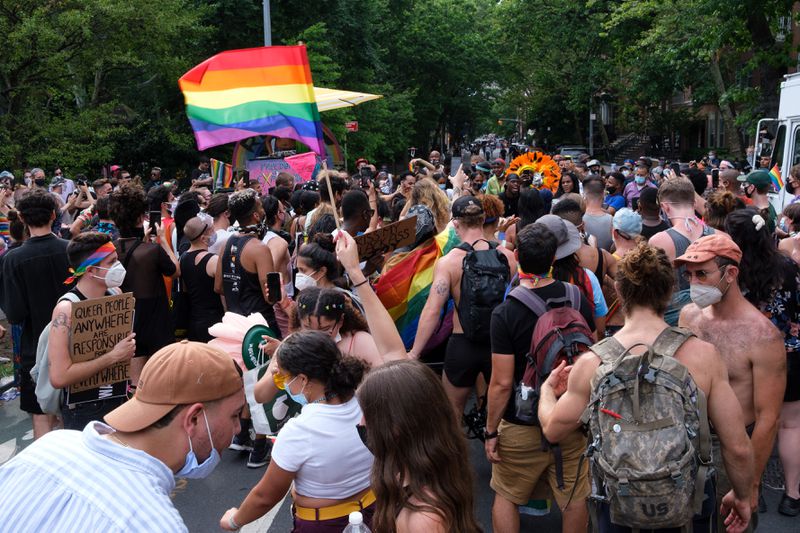 
A protester defacing an NYPD vehicle triggered three arrests and sparked the Manhattan melee between cops and gay pride and Black Lives Matter protesters, police said Monday.
The incident unfolded around 4:30 p.m. Sunday as a crowd of roughly 2,000 poured into Washington Square Park in Greenwich Village to celebrate the 50th anniversary of the first Gay Pride March on June 28, 1970.
Michael Dunn, 29, was allegedly in the process of scrawling “NYPD...” with a Sharpie on a police vehicle when cops moved in.
“That’s what set it off,” a police source said.

Dunn fought back and two other men, Millen Dang, 20, and Jacob Kruger, 25, jumped in to try and prevent the arrest, according to police.

In the ensuing chaos, which was caught on video that quickly went viral, cops were seen shoving protesters.

One video shows an officer using a baton to knock a protester on a bike to the ground.

The confrontation unfolded on the 51st anniversary of the Stonewall Uprising, which began after police raided the historic Stonewall Inn, a well-known gay bar on Christopher St. The ensuing riots are widely thought to be the birth of the global LGBTQ rights movement.

Dunn was also charged with making graffiti. He and Dang live in Brooklyn, while Kruger is from Harrington, N.J., according to cops.

Kruger was also charged with weapon possession for a switchblade, police said.

At Deng’s arraignment in Manhattan Criminal Court Monday night, prosecutors said he punched NYPD Sergeant Stephen Mazzaro as he tried to make an arrest, cutting the cop’s nose and breaking his glasses.

His defense attorney, Ben Dell of the Legal Aid Society, countered that he didn’t throw a punch, but rather was pushed into the cop in the ensuing mayhem.

“There’s no sort of bruising on his hands that anyway indicative of any kind of altercation of punching someone in the face,” Dell said.

Kruger was released on his own recognizance, while Dunn was still awaiting arraignment late Monday night.