‘All the world is watching’: George Floyd’s son, attorney speak 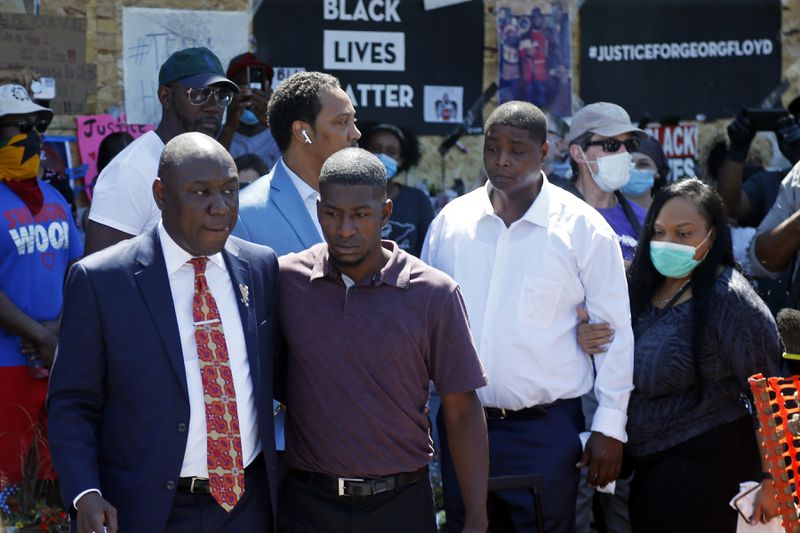 Family attorney Ben Crump (left) escorts Quincy Mason, son of George Floyd, on Wednesday in Minneapolis, as they and some Floyd family members visited a memorial where Floyd was arrested on May 25 and died while in police custody. (Jim Mone/AP)

Quincy Mason Floyd, George Floyd’s son, and civil rights attorney Ben Crump spoke at the site of Floyd’s death Wednesday, shortly before further charges against the police officers involved were handed down.
“We want justice for what’s going on right now,” Quincy Floyd said.
“We’re expecting these officer to be charged as accomplices for the killing of George Floyd,” Crump said.
“Floyd was an American citizen and George Floyd was a human being,” Crump added. “George Floyd deserved humanity. When he couldn’t breathe, none of us could breathe.”
Crump ended his statement repeating the phrase “All the world is watching" as the crowd joined him in a chant.
Minnesota Attorney General Keith Ellison is set to elevate charges against former Minneapolis police officer Derek Chauvin, who knelt on George Floyd’s neck, to second-degree murder. The three other officers who were at the scene, two who helped restrain Floyd and one who did not intervene, will be charged with aiding and abetting murder, according to the Minneapolis Star-Tribune.
Chauvin had previously been fired and charged with third-degree murder.
Earlier Wednesday, Crump had said the family expected the other three officers to be charged before a planned memorial scheduled for Thursday.
The Minneapolis Police Department has identified them as Thomas Lane, J.A. Kueng and Tou Thao.
“This is a significant step forward on the road to justice, and we are gratified that this important action was brought before George Floyd’s body was laid to rest,” the family and Crump said in a joint statement after the new charges were announced. “That is a source of peace for George’s family in this painful time.”
Posted by free heip at 12:37