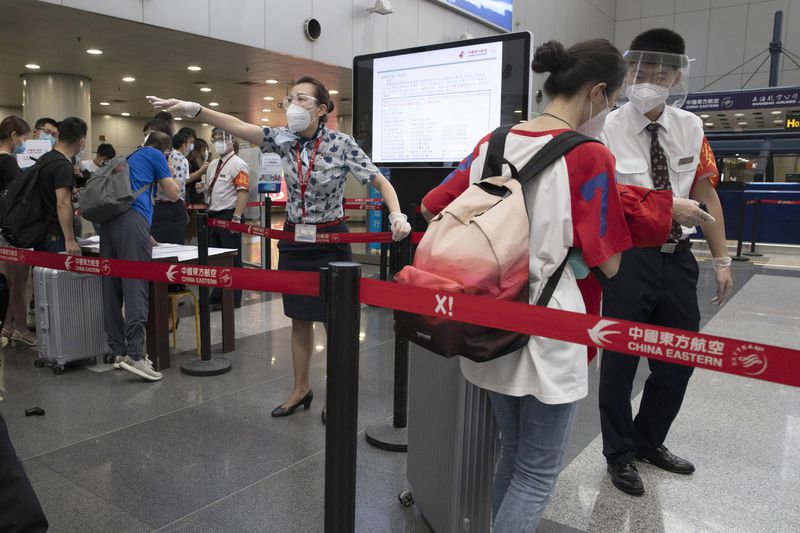 Airline employees redirect a traveller at a checkpoint for passengers from high risk areas to present their COVID-19 test results before checking in for their flight at the Beijing Capital Airport terminal 2 in Beijing on June 17, 2020. (Ng Han Guan / AP)

When the coronavirus flared in China this week, the country canceled flights, suspended reopenings and described the situation as “extremely grave.” With cases still rising in some U.S. states, local officials have balked at requiring people to wear masks.
In the United States, which has had the most reported cases and deaths than anywhere else, local authorities are grappling with balancing demands for constitutional rights and personal freedom with warnings from health officials that being lax will have deadly consequences.
China responded Wednesday to a new outbreak in Beijing by scrapping more than 60% of its flights to the capital, canceling classes and strengthening requirements for social distancing. It was a sharp retreat for the nation that only in March had declared victory over COVID-19.

“This has truly rung an alarm bell for us,” Party Secretary Cai Qi told a meeting of Beijing’s Communist Party Standing Committee.

In other countries where infections have flared, governments responded by again tightening restrictions.

But as U.S. states debate how and when to reopen parts of the economy amid surges in cases in places like Arizona, Florida and Montana, requiring even the use of masks has become a political and cultural debate, with some local officials defying pleas from doctors.

“Wearing masks decreases the shed of this virus,” said Dr. Bill Saliski, a lung specialst at Jackson Hospital in Montgomery, Alabama. “If this continues the way we’re going, we’re going to be overrun.”

Montgomery County has added more than 700 coronavirus cases in the past week, more than any other county in Alabama, with a total of 2,922 infections.

Saliski appealed to the Montgomery City Council on Tuesday night to mandate face coverings at public gatherings of 25 or more, but the measure failed, with members concerned about trampling on individuals' rights.

“I think to make somebody do something or require somebody to wear something is an overreach,” said council member Brantley Lyons.

The defeat of the measure led council member Audrey Graham to upbraid the council for what she said was a failure to act.

“I think we fail to realize how serious this really is,” Graham said. “We are not taking a stand. We’re doing nothing. Nothing here.”

In Columbia, South Carolina, city officials are considering a proposal to require anyone over 10 to wear a mask while inside or waiting to enter a public building, in public outdoor spaces while interacting with others, and while using public transportation or ride-sharing services.

But Gov. Henry McMaster has expressed concerns about infringing on civil liberties, stressing the importance of people taking responsibility for their actions.

“There are some limits to what we can do and what we can enforce,” he said, adding: “At this point, the answer is individual responsibility. It’s not mandates by the government.”

The state has added 595 new virus cases, bringing the total to nearly 20,000 since the outbreak began. In all, 607 people have died from the virus in South Carolina.

Arizona reported a daily high of nearly 2,400 new infections for a total of more than 39,000, while in Texas, Gov. Greg Abbott insisted the state’s health care system could handle the fast-rising number of new cases and hospitalizations.

“It does raise concerns, but there is no reason right now to be alarmed,” Abbott said.