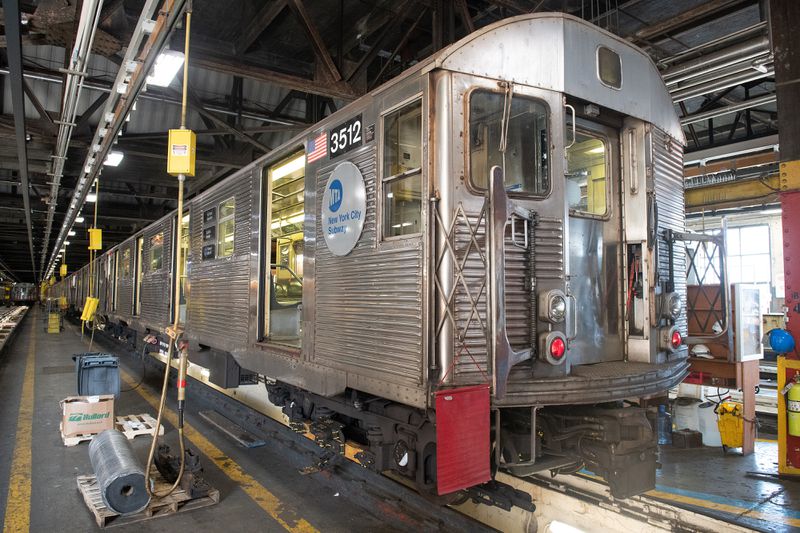 
A set of 56-year-old subway cars will soar again along Brooklyn and Queens elevated tracks this summer, chugging to the rescue after the latest batch of trains the MTA purchased were pulled from service.
The vintage cars — called R32s and nicknamed “Brightliners” — first came to New York in 1964, when Lyndon B. Johnson was president. They are the oldest train sets still running in any subway system on the planet.
Transit officials had been running the old trains on the A and C lines before the coronavirus pandemic hit, but put them in storage in March after a shortage of healthy workers sparked major cuts in subway service.
The Brightliners were slated to be retired earlier this year — but a confounding screw-up by the manufacturer of the Metropolitan Transportation Authority’s newest trains forced the agency’s oldest ones into service.
MTA leaders pulled all 318 of the new cars — called R179s — on June 3 after two of them separated on an uptown A train near Chambers St.
The scary snafu was due to Bombardier — the Canada-based maker of the cars — failing to install a pin designed to hold the cars together, officials said. The cars were assembled in a plant in upstate Plattsburgh.
The lack of R179s forced MTA officials to move train cars normally used on the L line to the J and Z lines, which in turn forced rush hour service on the L train to be slashed.
But come Wednesday, the Brightliners will be running again on the J and Z lines, where they had served riders for decades. L service will return to its normal rush hour levels of up to 20 trains per hour, MTA officials said.
The old cars will have areas near the conductor cab blocked off to passengers so conductors can have space to social distance. Unlike the rest of the MTA’s subway fleet, train crews must pass through public areas when switching from one side of the car to the other while they open and close their doors.
Transit officials hope they’ll finally be able to retire the old cars this summer — though it’ll depend on whether the new R179s are in working order.
The train that separated earlier in June was the latest incident in a frustrating history with Bombardier, which has been building train cars for NYC Transit since the 1980s.

The MTA in 2012 purchased 300 of them for $600 million, but the company provided 18 extra for free because of a three-year delay in building them.

The last of the R179s were delivered to the MTA in December, and a month later transit officials also pulled all the R179s after some of the cars’ doors were not closing fully.

Along with Kawasaki, Bombardier is just one of two companies that currently manufacture subway cars for New York City, leaving the MTA with little choice despite the company’s track record.

Transit officials in 2012 passed over a joint bid from the Kawasaki and Alstom, another train car builder, in favor of Bombardier’s proposal in order to save money and secure jobs at the company’s Plattsburgh plant.

But for now, the Brightliners will get what may be their final run in a summer when subway ridership is down by more than 80% due to the pandemic.

Transit officials are not yet planning an official retirement ride for the historic trains, as those events tend to attract hundreds of railroad enthusiasts and currently do not jibe with the city’s social distancing efforts.
Posted by free heip at 05:40